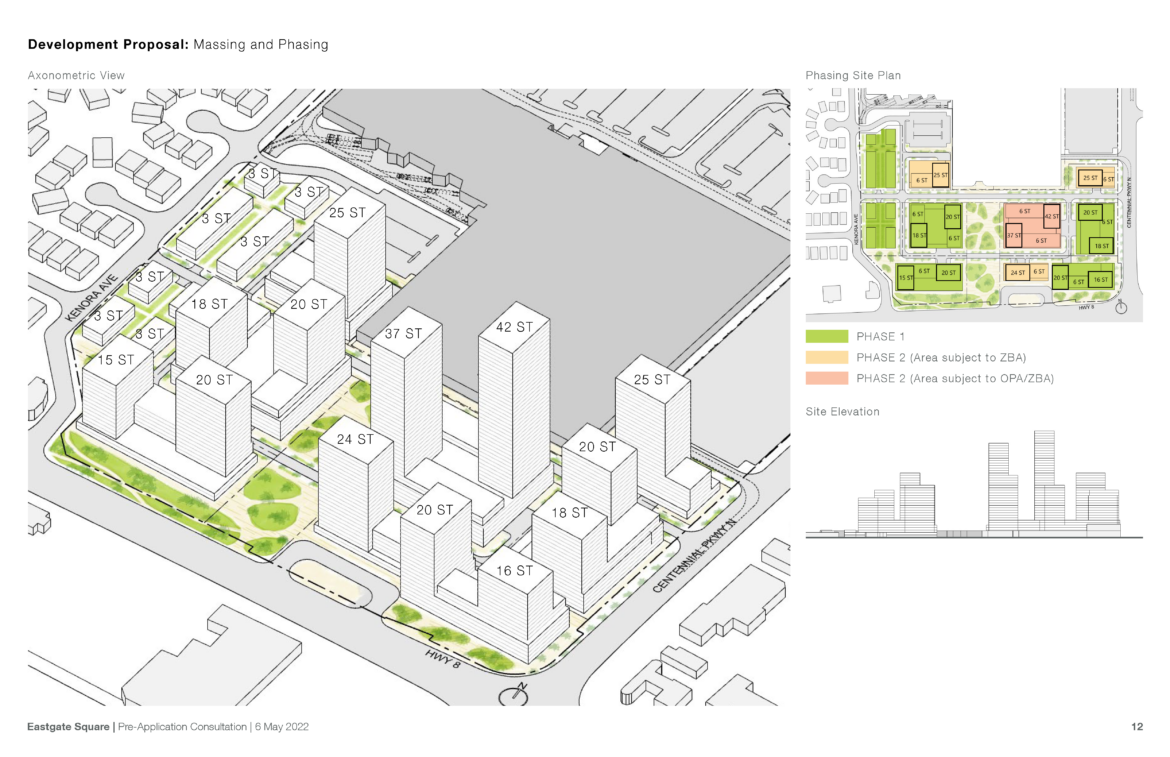 An early conceptual proposed residential redevelopment of the south and west sides of Hamilton's Eastgate Square submitted to the City of Hamilton on May 6, 2022

Harrison Equity Partners’ conceptual Formal Consultation package states the plan will “reposition the existing mall through strategic demolition and addition” with “context-aware intensification, relating to both the stable residential frontage of Kenora Avenue and the larger scale frontage of Centennial Parkway.”

The City received the conceptual plan on May 6 and it is being circulated among various City staff for comment. An internal staff Development Review Team meeting is not yet scheduled.

Harrison Equity Partners announced its plans to redevelop the site in a March 8 press release.

Developers frequently submit early conceptual Formal Consultation plans to the City prior to the significant costs of hiring experts and consultants to produce their official Planning Act applications. The purpose of Formal Consultation is to receive details comments from the City’s planning staff.

Conceptual plans are usually significantly revised following consultation. Following revisions, the developer will file their formal Planning Act applications. Public consultation and engagement will be based on these future plans. 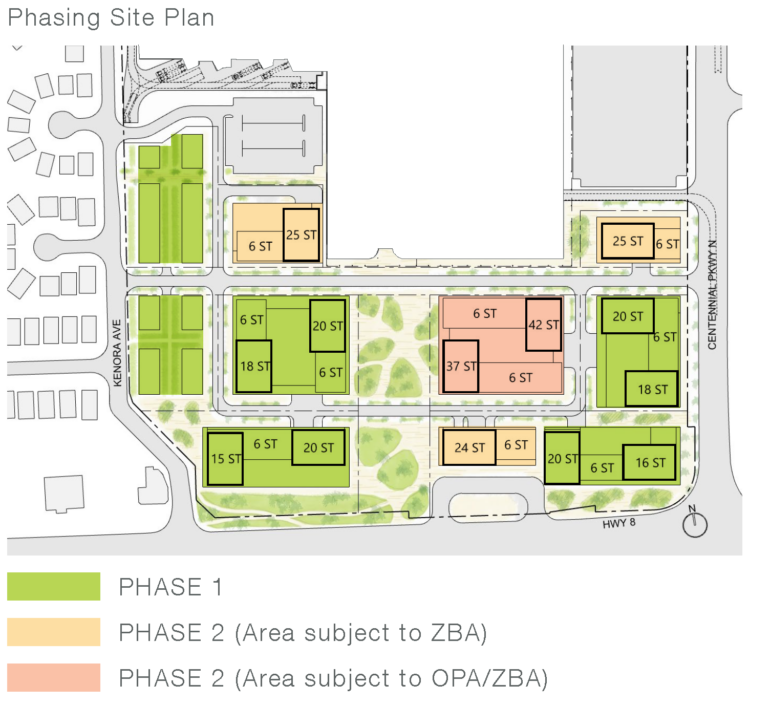 Phase 1 will fill in most of the existing parking lot along Kenora Avenue and the north portion of the parking lot abutting Centennial Parkway.

The buildings are grouped into four blocks of two buildings connected by six-storey podiums.

Building podiums will include parking, ground-level retail, and townhouse-style units.

Eight blocks of three-storey townhouses are proposed along Kenora Avenue.

Phase 1 can be built as of right within the existing zoning and secondary plan for the site. 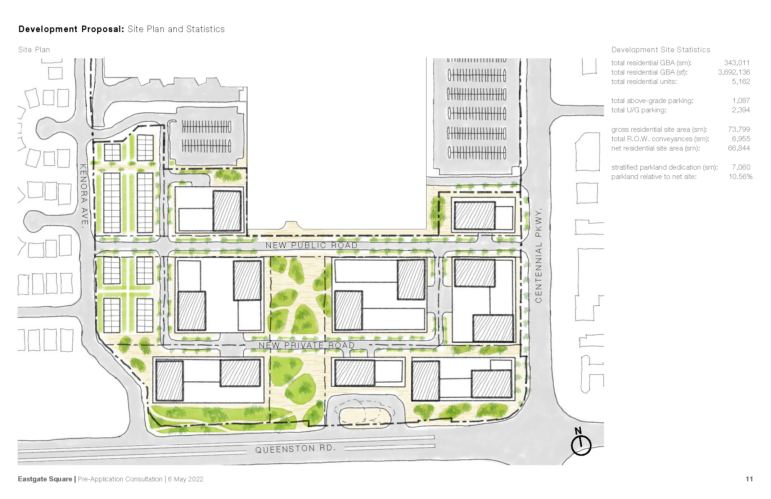 Eastgate Square’s current design is subject to a 2000 Ontario Municipal Board decision [2000 O.M.B.D. No. 873] which requires the mall’s parking entrances and exits to prevent vehicles from entering the residential neighbourhoods to the west and north.

The conceptual plans conform with that decision. Trucks servicing the Fortinos grocery store and shopping mall will not have access to Kenora Avenue.

Three of the four development blocks will require zoning bylaw amendments. These three blocks propose the construction of two 25-storey buildings and a 24-storey building.

The 24-storey building is planned to abut the existing HSR bus loop on Queenston Road.

This section of Eastgate Square and Queenston Road will serve as the eastern terminus of the B-Line LRT station, and be one of the most important bus terminals in Hamilton.

The existing bus loop is already over-capacity with multiple HSR bus routes forced to share stops. The Stoney Creek buses and Rymal bus route share stops. Buses are often required to wait for a platform to open prior to boarding and disembarking passengers.

Hamilton’s Chief Planner Steve Robichaud states the conceptual plan is being reviewed by both Metrolinx and the HSR. Comments from the transit agencies will be provided to the developer.

The final development block of Phase 2 will require both a zoning bylaw amendment and an official plan amendment to permit two tall buildings: a 37-storey and a 42-storey connected by a six-storey podium. This development block covers the existing north wing of the shopping complex which will be demolished.

Harrison Equity Partners is proposing to create a new public road between Centennial Parkway and Kenora Avenue. The roadway will run along the south side of the retained shopping mall. 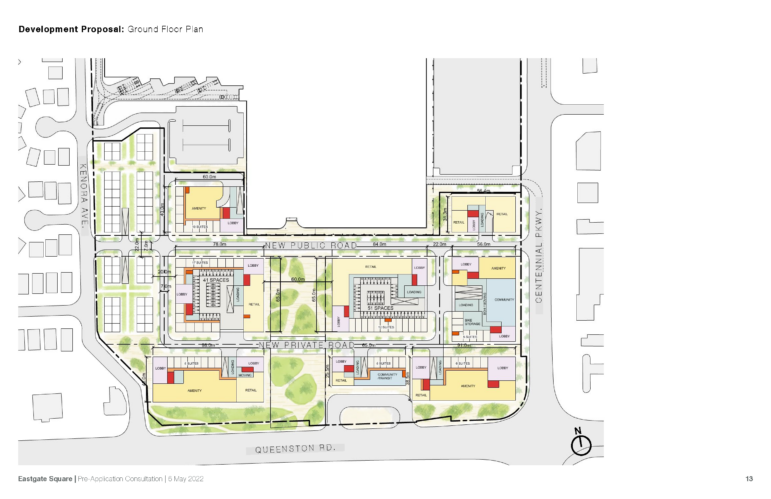 Residents of the neighbouring single-family attached houses to the west of the mall property have opposed past minor variance applications filed by the Eastgate Square due to concerns regarding traffic impacts.

The City of Hamilton’s Development Charges background study states the average number of people per residential apartment unit in Hamilton is 1.76 people. The City’s report states there are an average of 3.39 people per single-detached home in Hamilton.

This conceptual plan will house over 9,000 people based on these averages.

The project will require review by the City’s Design Review Panel. The lands are subject to Provincial planning control under the Building Transit Faster Act.

Harrison Equity Partners’ have hired Bousfields Inc as their planning agent. BDP Quadrangle is the architectural design firm which created the conceptual submission.

The owners of Lime Ridge Mall will be in front of Hamilton’s Design Review Panel with their plans to redevelop a portion of the Hamilton Mountain to residential mixed-use with two 12-storey buildings. The owners of 200 Centennial Parkway North, a few blocks north of Eastgate Square, are planning to convert the large strip mall to mixed-use and have filed their formal Planning Act applications.

The plaza on the northwest corner of Upper Sherman and Mohawk Road, formerly anchored by a Wal-Mart, submitted a Formal Consultation package to build 1761 residential units spread over eight mid-rise buildings.