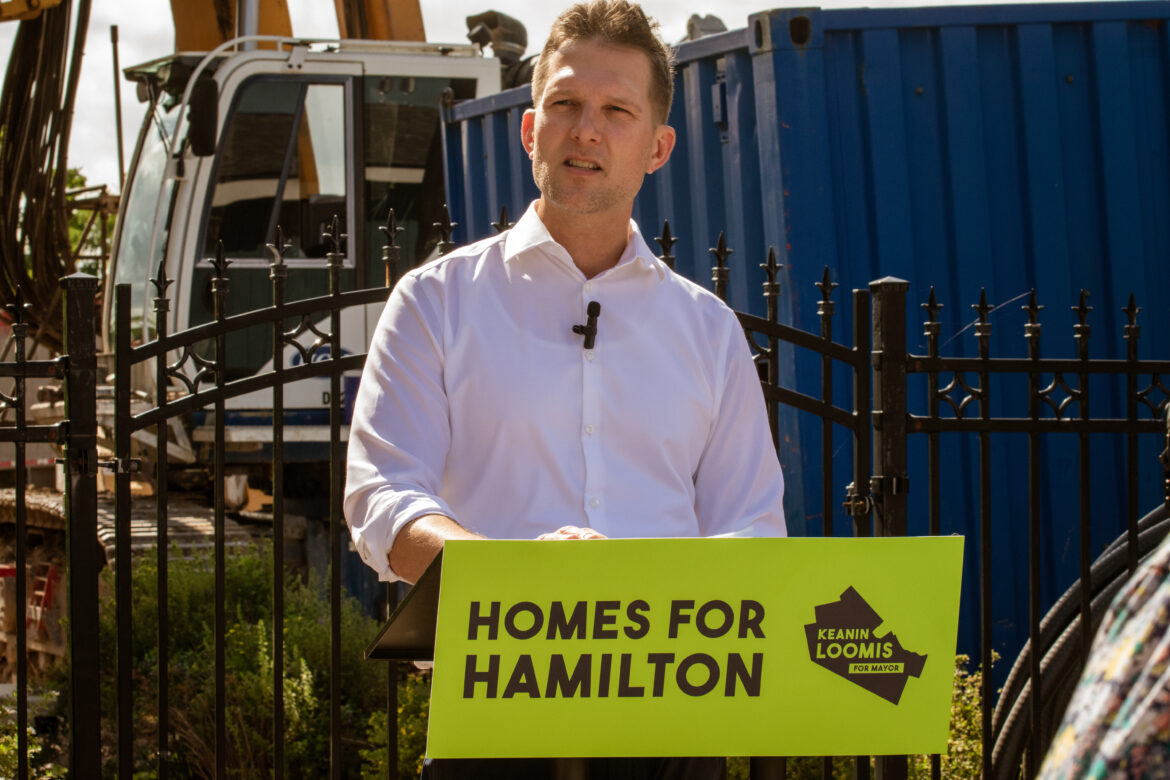 Hamilton Mayoral candidate Keanin Loomis stood in front of a Stoney Creek tall building development under construction and pointed to it as an example of residential development he supports.

On a major arterial road, with 20% of the units being market affordable, the 19-storey rental building at 870 Queenston Road is adding 219 units to Hamilton’s housing mix.

“Our Homes for Hamilton plan will see us double the pace of homebuilding in Hamilton,” Loomis stated.

“That means we must build in areas that are already serviced by sewers and roads. We must deliver as many housing units as possible around critical transit nodes where people live, work, shop and play.”

During Thursday’s press event, I asked Loomis for more specifics on definitions of affordable housing and how he defines it.

He stated the City’s present definition of 125% of the average market rate as affordable “doesn’t make sense.”

As Mayor, Loomis will launch a review of the rate to modernize the definition, similar to what Toronto has done. Toronto now defines affordable based upon income percentile.

Loomis says he will consult with a range of stakeholders.

Specifically asked if this be a Housing Summit, Loomis stated, “I would only do that if it’s actually going to accomplish something.”

I asked “What’s missing .. or what do you want to change” in the forthcoming amendments.

He stated he wants to ensure both developers and non-profits can build more easily. He will eliminate the parking requirement for secondary dwelling units, stating the City needs to provide good transit to ensure successful intensification.

On Tower Renewal, the term used for the extensive retrofits needed to residential apartment buildings which are now 50 to 60 years old, Loomis states he wants to leverage financing to enable the conversion of this housing stock to cooperative housing and ensure there is not displacement of affordable housing stock.

Loomis was asked by HCN’s Kevin Werner about tall buildings, such as the proposal at 310 Frances Avenue [the three tall buildings on the Stoney Creek waterfront] and at Eastgate Square.

Loomis stated there must be balance in development.

“It’s to achieve exactly that,” he stated in referencing adding density along the B-Line corridor to add housing and address affordability.

He says denser developments much improve communities by creating the amenities that walkable communities need.

As Mayor, he wants to hire more planners at City Hall to decrease planning application processing times, especially with coming changes to the Planning Act that will require the City to refund application fees if the City does not process files within firm deadlines.

The demand for Registered Professional Planners is very high, with the private sector able to offer higher pay than the government sector.

I asked, “how do you, as a municipal leader, within the constraints of the municipal budget, attract tap talents and planners to the City of Hamilton when competing against the private sector?”

“A City job should be a good job. It should be a job that people are proud of where they are able to contribute to their communities and also have that work-life balance that they’re trying to achieve,” Loomis stated.

Loomis says he will address the toxic work culture at Hamilton City Hall. The existing culture discourages good people from applying to work there and causes good employees to leave for other places.

“I think that you will see that there will be a lot of people willing to work for the City of Hamilton, once we have a regime change.”

In this, Loomis is correct.

Hundreds of Hamiltonians get up each day and commute to work for other municipal governments.

These Hamiltonians, some of who are registered professional planners, would love to also work in Hamilton.

Getting residential zoning reform right early in 2023, coupled with public transit expansion – including an overhaul of the HSR’s routes -, will enable housing to be built.

This will enable gentle intensification within neighbourhoods.

Loomis’ plan can work as short as it may seem on paper.

It is not that Hamilton needs a housing revolution. We need a City Hall that enables the building of new housing.