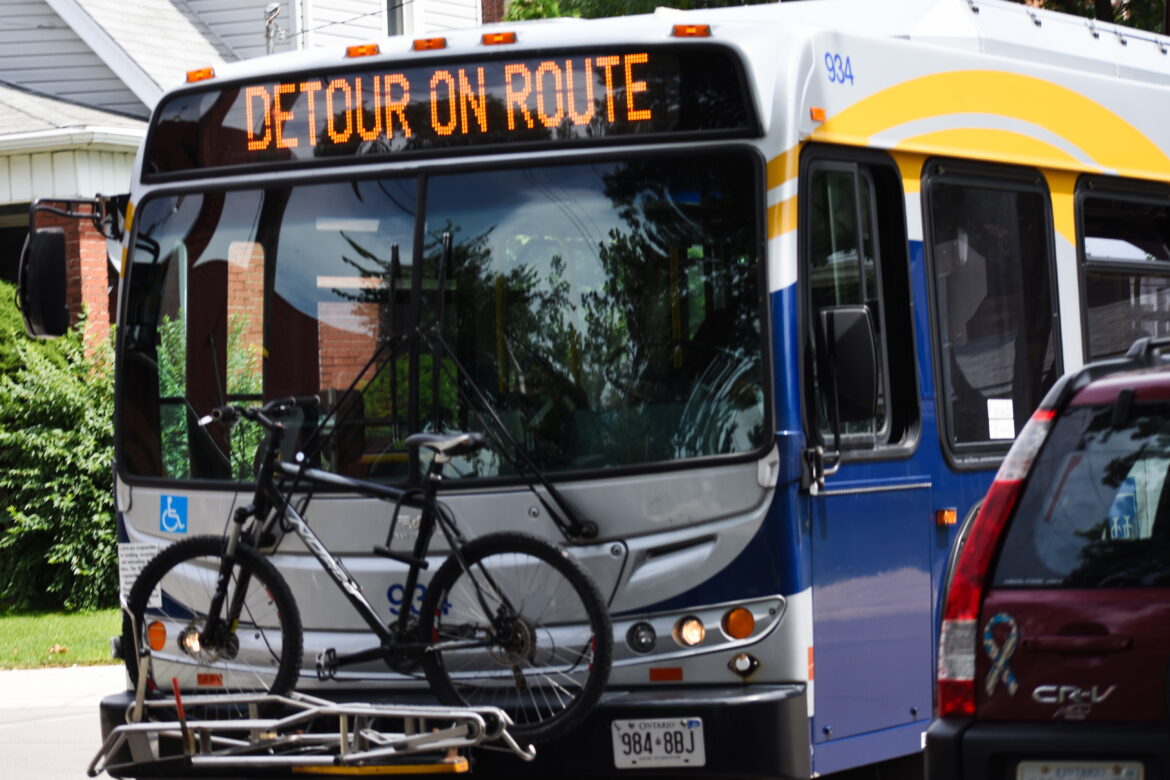 There is a public relations war underway between City Council and the union representing Hamilton Street Railway employees over who is to blame for the crisis in Hamilton’s public transit division.
The City is trying to place the blame for the HSR’s 25-years-in-the-making crisis on its employees, citing a 19% absence rate as the reason for the crisis. Amalgamated Transit Union Local 107 says the problem is mismanagement and is calling on council to fire the HSR’s Director who has been on the job for 13 months.
What is the truth of the matter?
I’ve been working on the Transit Crisis file for months, digging to get to the truth. Unfortunately, my efforts to get the truth via a Freedom of Information request was stonewalled by the City requesting $3000 for simple performance and statistical data.
When I made this stonewalling public, the City was forced to admit buses were in fact missing, and we’re finally seeing Council act on the crisis.
The problem is we’re dealing with a crisis we don’t understand because the City won’t release basic performance and staff complement data – the City claims they don’t have it, yet is able to state with confidence that there is a 19% “absenteeism” rate.
The City’s claims are mutually exclusive – either they have the data or they couldn’t produce their main speaking point.

Update: 20 hours after The Public Record the City finally released a breakdown of their 19% figure. The breakdown shows there is no work protest or drivers just not showing up for work.

This is important, because it’s all the City wants to talk about.
Does 19% absenteeism mean 97 of the HSR’s 509 bus operators are deciding to not show up to work every day? The way its being spun, and some people may be lead to believe this to be the fact.
The 19% includes staff on long-term disability, short-term disability, work accommodation, illness, emergency leave, sickness, and other causes for absences. We don’t know the breakdown, because the City won’t provide it.
Bus operators have strict standards for licensing and health, including regular medical reporting cycles. HSR operators must hold a Class ‘B’ drivers license.
If there are questions about their health, for example high or low blood pressure, they are not allowed to operate a bus for a period of time until the medical concern is resolved. This is for good reason, the consequences of a operator going into cardiac arrest while operating with 50 or more people on a bus would be disastrous.
This is a short term disability, contributing to the “absenteeism” rate.
Many drivers are presently off on Workplace Safety and Insurance Board coverage due to complaints about skeletal muscle injuries, citing the lack of shock absorption in the new NOVA buses the HSR has been purchasing for the past two year.
Considering the state of Hamilton’s roadways, it is understandable that some drivers will experience injury. The question is how many? Are the new buses part of the cause?
Again, we don’t know because the City won’t release information.
What is the average age of HSR operators? If the average age is increasing, it is likely that the “absenteeism” rate will increase as well. As we age, people face increase risk of serious illness. This combined with the health standards required for bus operators will increase “absenteeism”.
(Recently, an operator who is a friend of mine had a drug complication and was not allowed to operate a bus with passengers for many months. He was not work accommodated, and placed on short-term disability.)
There are many legitimate reasons operators could be off work.

I filed a Freedom of Information request to the City for human resource head counts for the past 30 months including a breakdown of staff on long-term disability, short-term disability, work accommodation, illness, emergency leave, sickness, and other causes for absences.
The City responded they do not have this information available, and that it will take 43 hours to compile. At the City’s standard rate of $30 per hour, it will cost The Public Record $1300 to get this information.
The facts this data will provide are essential to informed public dialogue on what is happening at the HSR, and how to fix it. So why isn’t the City making it public? 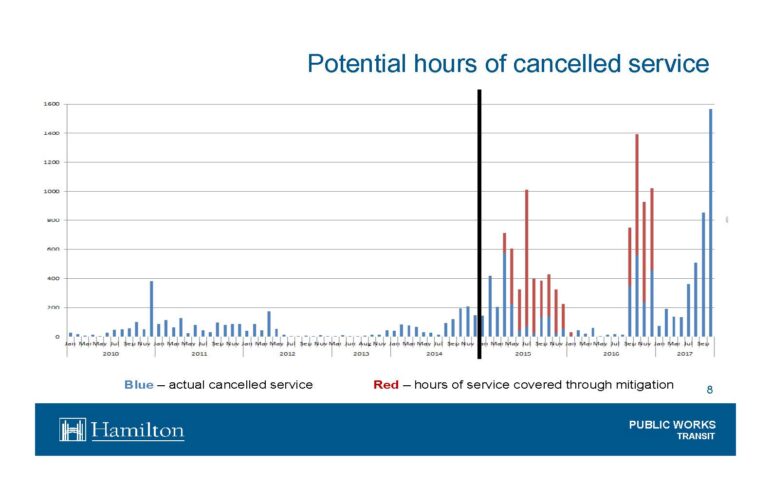 I’ve heard rumours of unofficial job actions, and I want to report if there is – this is important for the public to know. I sought daily absence rates to track potential unofficial job actions.
I became aware of a Friday in early March that some younger operators were attempting to organize a work protest by calling in sick. Local ATU executives worked to prevent this job action. On the day of the action, I noticed an increase in canceled buses – the public needs to know if there was an increase, or just that I was looking for missing buses on that particular day?
Is there a pattern to when operators are calling in sick day of? Are they more likely to call in sick on a Monday or Friday, on a day with bad weather or good weather, around a long weekend, or even on days of major highway closures?
There was a change to the middle manager who is scheduling buses – a change which I know caused some senior operators to refuse overtime in protest. Did this change cause more operators to call in sick, or a significant number of operators to refuse overtime?

What about burnout of those working overtime? Detailed statistics will show if the increase in bus cancellations is the result of more operators not driving, or operators deciding to not take overtime.
The ATU Union says they were opposed to 68 hours per week with overtime because drivers were experiencing burnout at 60 hours per week, is this true? With the City refusing to release data, we cannot being to find out.

Spin Instead of Facts Doesn’t Serve The Public, Who Does It Serve?

In the absence of facts, the City has been spinning, spin which does not stand up to scrutiny.
Is the HSR short of operators? Under direct questioning from Ward 3 Councillor Matthew Green at last week’s Council GIC, HSR Director Debbie Dalle-Vedove stated the HSR is short operators and that had they hired in the spring as planned, they would not be.
This followed the HSR Director presenting a slide to Council stating she hired 37 operators, and 23 operators have retired. Her slide included hires that have not been made, and excluding operators who left the HSR other than by retirement. Much like the “absenteeism” statistics, the HSR did not provide the basic information we need for a proper informed discussion. 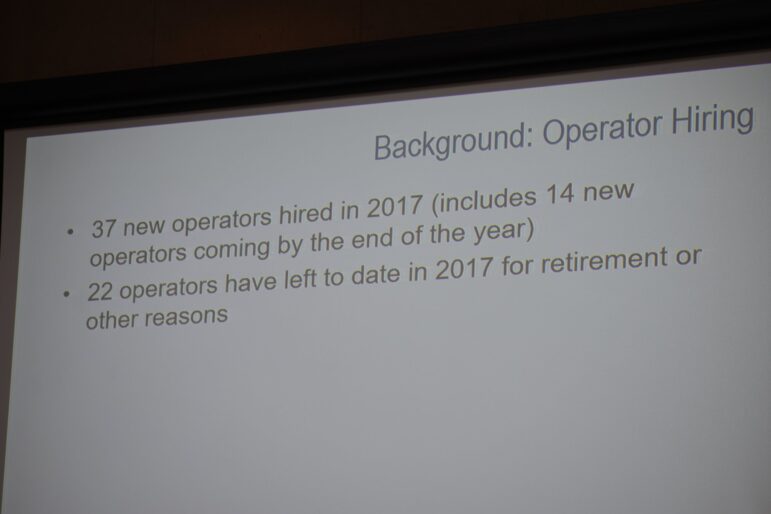 Slide presented to City Council by HSR Management claiming there is no shortage of operators – citing two different timelines for the statistics.

Right now, the City is intentionally pushing the narrative that one-fifth of HSR operators are ‘not showing up to work’.
You’ll note how carefully they are expressing the 19% absence line, not providing any detail on it, and not stating this is inclusive of legitimate reasons for absences such as disability, emergency leave, and other cause.
In backchannels, the Union is trying to push there is an increase injury rate from the Nova buses, a lack of operators, and a toxic work environment.
The public is left to wonder what is the truth, and this is unacceptable.
I trained in journalism under great editors at Maclean’s, one of them explained that when the government isn’t releasing information, and instead spinning, the facts are likely much worse than anyone expects.
What’s really happening at the HSR?

0 thoughts on “Transit Crisis Spin: When City says 19% of Drivers Are 'Not Showing Up' What Does That Really Mean?”