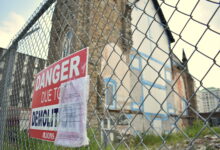 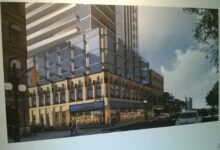 Developer commits to working with Heritage Committee to recreate ground level look of building, and interaction with historical character of Downtown Core. 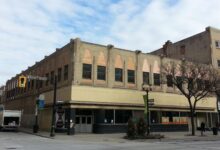 A consultant’s Heritage Assessment for the Downtown Hamilton building which housed the Kresge department store is now being reviewed by City staff. Demolition permit may be issued once utilities are cut to building.

Hamilton’s Heritage Committee is going to work with the development group planning of LIUNA and Hi-Rise Group to look into incorporating parts of the front facade of the former Kresge site at 43-51 King Street East in Downtown Hamilton.

Heritage Committee Votes to Save Shaver House in Ancaster from Demo, Will Council Agree?

The plot is familiar to Hamiltonians. A building of heritage interest is scheduled for demolition, a 60-day countdown to the permit being issued begins, a rush occurs as the Municipal Heritage Committee tries to determine if they wish to block the demolition by designating the building, a heated debate ensues, Heritage Committee decides it should be saved, and then Council ultimately gets to decide. Thus happened again at today’s Municipal Heritage Committee as a walk-in report announced to the committee that The Egerton Shaver House (Fig 17 on this Ancaster Township Historical Society page) is scheduled for demolition permit issue on February 13, 2017. The application for to demolition is to facilitate the construction of a “retail commercial plaza as well as a 50 unit, 6 storey multiple dwelling on the site.” The building, built c.1856, was first identified as being of potential heritage value in 1984. 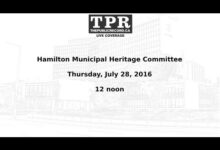 The City Clerk states in an email to members of the Hamilton Municipal Heritage Committee that the June meeting is cancelled.

Hamilton Municipal Heritage Committee for May 2016

Hamilton’s Municipal Heritage Committee meets on May 19 at 12 noon. 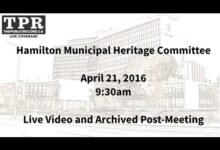 Hamilton’s Municipal Heritage Committee’s April 2016 meeting will include a delegation from Wilson-Blanchard pitching their plans for the demolition of the Gore Buildings at 18-28 King Street East and the rebuilding of the facade of two of the buildings at 18 – 22 King Street East.
The Heritage Committee will be asked to make a recommendation to City Council in regards to the proposal.
Live video starts at 9:30am on The Public Record