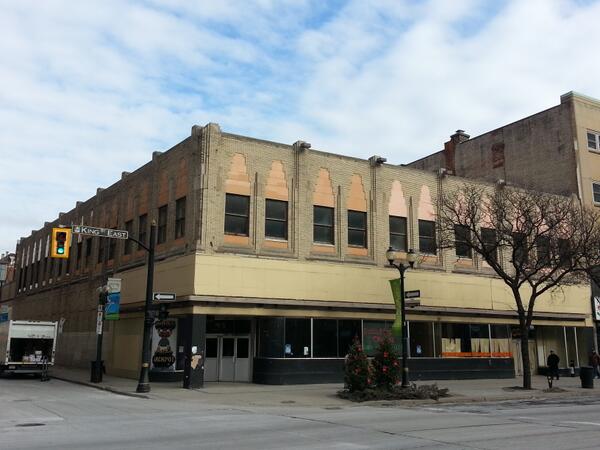 Hamilton’s Heritage Committee is going to work with the development group consisting of LIUNA and Hi-Rise Group to look into incorporating parts of the front facade of the former Kresge site at 43-51 King Street East in Downtown Hamilton.
The developers are planning to build two tall buildings – 25 and 34 storeys – on the site.
At the request of committee, staff have produced a reportrecommending the designation of the former Kresge building under Part IV of the Ontario Heritage Act.
The downtown building is a landmark, fronting onto Gore Park and directly across from the Right House building.
A demolition permit application was filed in early December, and as of February 5, the developer will be issued a demolition permit for the entire building.
Sergio Manchia of UrbanSolutions, the planner representing the developer, spoke to the committee. He started by saying he would not be “mixing words”, directly stating the developer does not see any value in retaining any portion of the rear and side of the property.
The committee agreed with him, with numerous members saying they are not looking to preserve the side or rear of the structure.
Manchia said the developer is conducting a full heritage assessment and hired a professional heritage consultant to complete the assessment. They will make the assessment public.
A healthy dialogue followed between the committee and developers agents.
Graham Carroll, a citizen member of the committee, asked many questions about the planned first phase demolition work. He sought assurances from the developer that a decision to not designate today will not result in the demolition of the front portions along King Street.
“If we do this [table the recommendation], we’re putting our trust in you”, Carroll said.
Shawn Marr, Vice-President and Director of Operations for The Hi-Rise responded “we will not touch King Street, we won’t touch the front. We want to get to work in the back, along King William and Hughson … we want to determine site condition.”
In the end, the Heritage Committee voted to take no action, meaning the demolition permit can be issued in early February. The development group committed to returning to the Heritage Committee with their assessment, and the groups will talk further at that time.

0 thoughts on “Heritage Committee Commits to Working with Developer of Former Kresge Site, Declines to Designate”