The Downtown Hamilton Secondary Plan set a height limit equal to the Niagara Escarpment for all new tall buildings in the downtown.

Farr argued exceeding the height limit at 75 James Street South is in keeping with sound design principles and does not undermine the intent of the Downtown Hamilton Secondary Plan.

Fengate and LiUNA are proposing a 111.0-metre 34-storey building on the northeast corner of James South and Jackson Street East. The height limit is 94.2 metres. 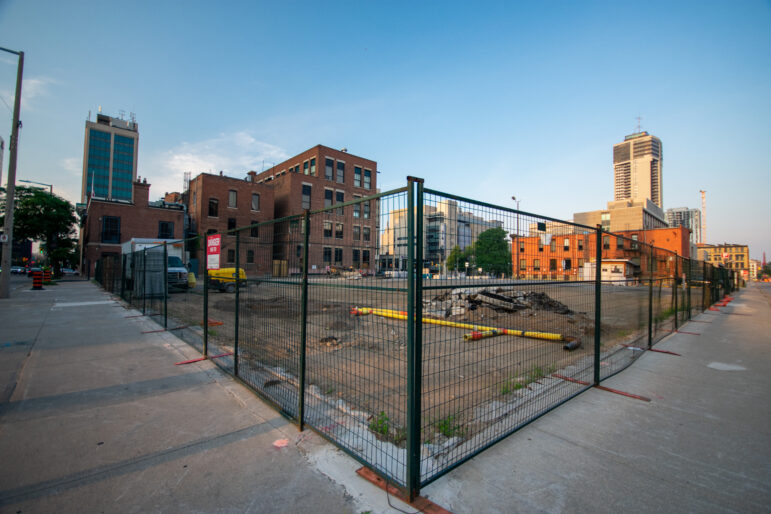 “Certainly, the intent of the height cap is to preserve vistas, to preserve the views,” Farr stated. “It’s a beautiful view, and that it is very much intact.”

Farr cited the view from Joseph Mancinelli’s living room to make his argument.

“Joe’s with us, Mr. Mancinelli, and he’ll tell you, it’s still spectacular when you look at the panorama from his living room window,” Farr said.

Mancinelli is LiUNA’s International Vice President and Regional Manager for Central and Eastern Canada. Mancinelli lives in a house that borders the escarpment.

City staff told the Committee of Adjustment the height exemption is not an appropriate minor variance.

“The Downtown Hamilton Secondary Plan establishes that no buildings in downtown Hamilton shall exceed the height of the Niagara Escarpment,” stated Shannon McKie, the senior project manager who oversees urban planning applications.

“I asked the architect of our policy that escarpment height policy, the very highly respected, one of my favourite guys, Jason Thorne. I asked him, I said, You think this is okay? Are you okay? With this And he said, yes, if it’s exceptional design, and if it’s a beacon or a prominent location,” Farr said of his discussion with Thorne about Pier 8.

Thorne was not present at the hearing.

“I would also argue that in the very heart of our city, essentially, Main and James, that is also a prominent location that is also a beacon. And this is not 45 stories. It’s for extra storeys,” Farr said.

Some members of the Committee of Adjustment expressed concerns about changing a secondary plan.

“I think that Council and staff were very deliberate when they put a cap on the, on the height of buildings in the downtown core. And I feel that if we were to start making changes to that through minor variance, I don’t think it’s our place to do that”, said committee member Margaret Smith.

Others expressed their confidence in LiUNA to build a quality project.

“I have such respect for LiUNA, and the projects they put together,” said member Nancie Mleczko.

Farr’s final pitch to the committee was to say past tall building minor variances have received no complaints.

“Speaking directly to our Committee of Adjustment members, you know, you’ve made decisions on major high-rise projects over my 11 some odd years on Council,” Farr said. “I want you to know from the standpoint of the ward councillor’s office, of all the decisions you’ve made for minor variances to happen and these major city building projects that have added unbelievable vibrancy to our core, notwithstanding a little pandemic lull right now. Not one complaint has come to my office. So to date, you’ve made the right call. There’s my little bit of pandering to the committee at this point. I’ll leave it at that. Hope you can make the right call here.”

The minor variance was approved with some members of the Committee of Adjustment opposed. Hamilton City Hall did not release which members voted.