It was a busy week, I regrettably didn’t get a newsletters out after Monday, so this is a Sunday newsletter reviewing the week that just past.
Joey’s Opening Note
You may not like the outcome, but you can begrudgingly respect the process.
On Tuesday, Mayor Eisenberger gave his annual address to the Hamilton Chamber of Commerce Mayor’s breakfast. To compare his speech to the rubber omelettes served is fair; both lack freshness and were bland. Here’s the thing, in an election year, Eisenberger could not win.
Had he delivered a rousing speech, he’d open himself to criticism that he was using his office to campaign, especially after his “informational” update flyer distributed in The Hamilton Spectator a few weeks ago. (Among the discussions in the foyer were people commenting on this taxpayer funded campaign material with Eisenberger’s name five times on the front cover).
So Mayor Eisenberger went bland, and said basically nothing, which was better than being seen to use his office for campaigning.
Wednesday, City Council debated urban chickens again. Similar arguments that a been made in the past were made again. The primary difference is time, seemingly in recognition that they were repeating themselves, counsellors decided to engage in an unofficial competition of who can deliver the most chicken puns. Everyone seated at desks in the Chamber seemed to have a good time, while some in the gallery rolled their heads and groaned at the cheesiness.
In the and Council voted 10 to 5 against a “compromise motion” to have staff re-study the issue and bring forth recommendations to Council.
Ward 11 Councillor Brenda Johnson said aloud after the vote that she oppose having a staff report when counsel is already made up its mind and would vote down urban chickens anyway. Putting aside our feelings (and I know the demographics of this newsletter – many of you support urban chicken) on this matter there is a positive in Council not wasting staff time (and our limited tax dollars) when they’ve already decided the matter in advance.
Staff time wasted on reports the Council will not read, and will not affect change, his time away from reports such as family-friendly housing that presently has no deadline and no staff assigned to writing it. In this instance, Council deserves some credit for not wasting everyone’s time. 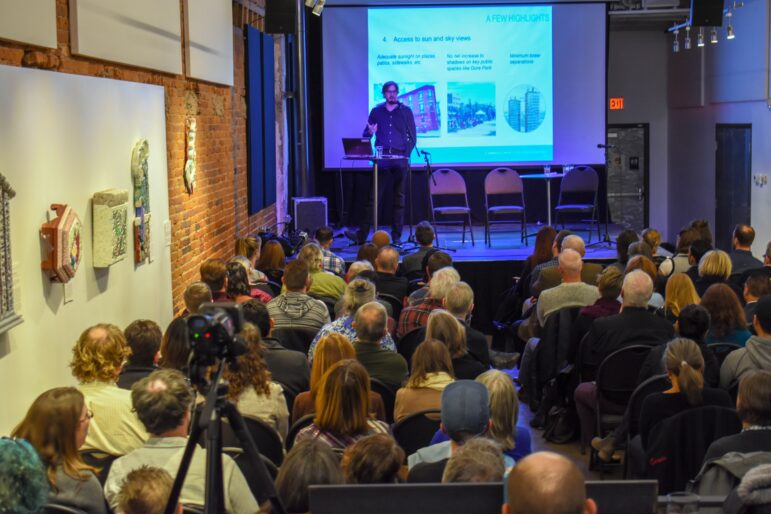 The Downtown Secondary Plan (DTSP) will be debated by City Council this coming Tuesday. Last Tuesday, the Useful Knowledge Society of Hamilton hosted a very information discussion on the plan. The event featured a presentation overview of the Plan from City of Hamilton General Manager of Planning and Economic Development Jason Thorne, followed by a Question and Answer with City of Hamilton Director of Planning and Chief Planner Steve Robichaud joining Thorne to answer audience questions. Full videos of the event are on The Public Record. Photos on Joey’s Instagram.
TPR contributor Rob Fiedler continues his look at the DTSP, exploring how the DTSP hopes to see Hamilton’s Downtown as a complete community and not just a playground for young single profesionnals. Fiedler explains the challenges of implementation, and why multi-unit family housing is important to the future of urban cores.

Details are emerging in three separate human rights complaints file against two local MPPs, the Hamilton Spectator provides details.
Hamilton Mountain MPP Monique Taylor is alleged to have pressured one of her employees to file a false sexual harassment complaint against another employee, and other violations, by two of her former employees.
Hamilton East Stoney Creek MPP Paul Miller is alleged to discriminated against
constituency assistant Todd White when White decide to take parental leave and poisoned workplace. White is also Chair of the Hamilton-Wentworth District School Board. Among the most serious of allegations, White alleges Miller used “derogatory phrases” referring to people in the LGBTQ+ community, and that Miller criticizes the appearance of women. These details are included a story by HCN’s Kevin Werner.
NDP Leader Andrea Horwath is standing behind her MPPs at this time, saying she wishes to see due process for all involvement. Miller and Taylor remain candidates for the NDP in June’s election.

LRT Shortlist Released: McMeekin Reminds Council The Province is Giving Them the Billion They Asked For

Friday was the “Hamilton Summit” at City Hall, a full day of sessions in which City Council explained why they feel they’re getting a bad deal from the province.
Liberal MPP Ted McMeekin choose summit day to make a competing announcement at McMaster University that the LRT request for proposals was being issued, and used his press conference to unveil the three bidding teams that qualified for the project. The not too subtle underlying message, Council repeatedly asked for $1-billion for LRT, the Province delivered, and Council is not getting a raw deal. (The LRT remains vulnerable to cancellation depending on the outcome of elections this year)
Back at the Summit, there was one good session involving two academics discussing municipal financing strategies, including Dr. Harry Kitchen explaining where municipalities should their existing taxation powers to raise revenue effectively. Many of Kitchen’s ideas – runoff water pricing, road tolls, etc – are political suicide.

“Inclusionary Zoning” is now in force, the Provincial Government announced Wednesday.
The details of the new regulation are not yet posted to the Ontario Regulations website. We know from the press conference that each municipality will be left to decide if they want to implement inclusionary zoning, and how they will implement it.  This is a response to criticisms of the earlier regulation that it was too weak, too cookie-cutter, and unworkable for a variety of reasons.
Pro-IZ stakeholders, who’ve seen the regulations, tweeted positively about the changes. However, the stakeholders are in Toronto which is a very different real estate market that Hamilton – the City of Toronto has much more leverage to demand IZ from developers as per-foot sale prices are double that of Hamilton.
What does this mean for Hamilton? It means Council must decide to implement inclusionary zoning, then resource and assign staff to writing a polic then decide if they wish to implement the staff recommendations. In short, it depends on the results of both the provincial and municipal elections. As is the case with almost all government policy good government results in good policy, and bad government bad policy.
Over at TVO.org, John Michael McGrath is raining truth all over the announcement: Ontario’s housing minister believes cities will use new zoning powers wisely. Toronto sets out to prove him wrong.

The government press release said $5.9 million but translated in the units it’s actually somewhere between 20 and 25 units of affordable housing for a 13 km LRT route or approximately 1.5 units for every kilometre of track. The $5.9 million figure was celebrated as a great step towards addressing the cities of affordable housing crisis and showing that there will be community benefits from the LRT. However 25 units is a lot less than the number of units of housing being displaced by expropriation to build the LRT. McMeekin responded very professionally to my criticism of how few units this is by tweeting “My hunch is the additional monies will link up with other allocated funds + (stay tuned) and that the total impact will be much more significant” .

Council debated area-rating funds during a series of heated debates, with Councillors attacking each others character, accusing one another of bullying and ulterior motives, and pointing at some uses as being slush fund spending.
Two Council watchdogs, Viv Saunders and Gabriel Nicholson, sparked the discussion when they went into detail on area rating spending, and showed that much of the spending was not for infrastructure, a violation of the Municipal Act which only allows Special Levys to be used for their intended purpose.
In the end, Council voted to have staff create definitions for what is infrastructure. This report is not expected until the next term of Council. 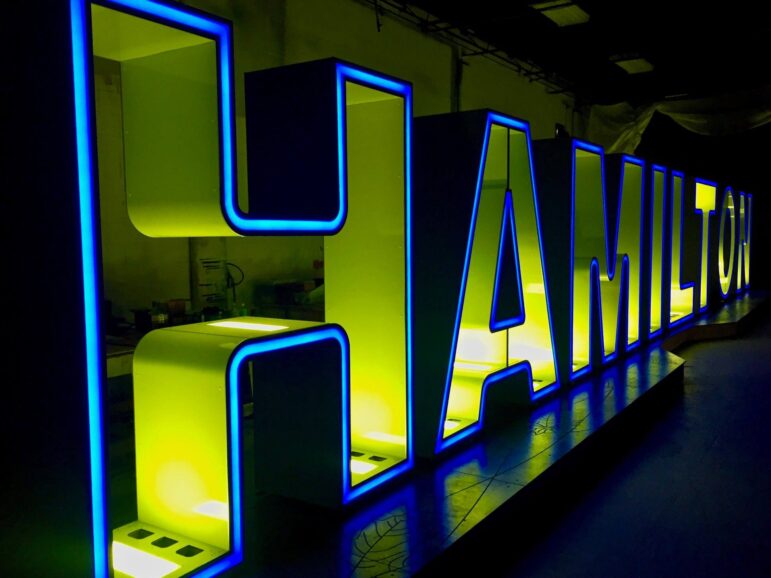