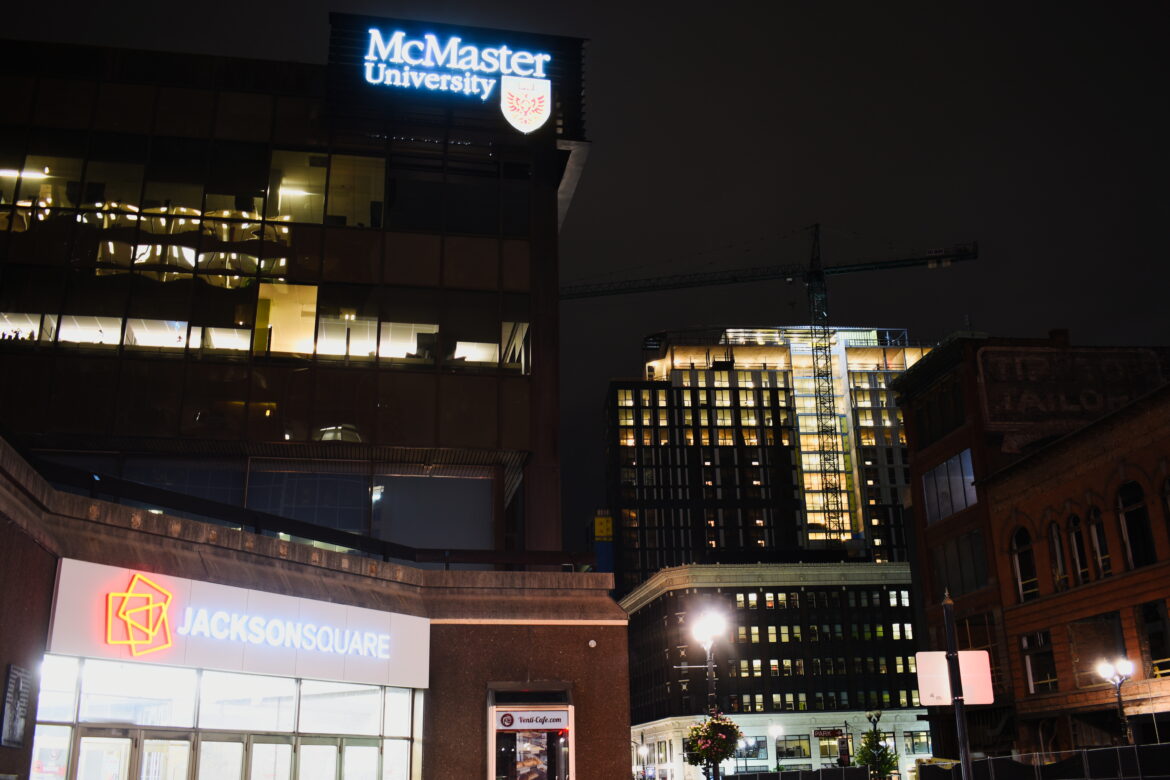 Tuesday night Jason Thorne, Hamilton’s General Manager of Planning and Economic Development, and Steve Robichaud, its Chief Planner, shared the stage at Mills Hardware on King Street East with Raise the Hammer editor Ryan McGreal to talk about the City’s new Downtown Secondary Plan (DTSP), which will go to Council’s Planning Committee next week for approval.
The well attended event, organized by the Useful Knowledge Society, was intended to give interested members of the public an opportunity to better understand, not so much the fine details of the new DTSP, but the vision and thinking behind it. 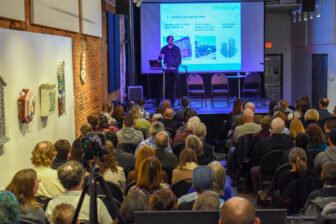 In my first post in this series, I discussed how the draft of Hamilton’s new Downtown Secondary Plan (DTSP) released on March 19th responds to current development pressures, and, in particular, a recent wave of proposals for tall buildings, which the City defines as buildings 12 storeys or higher.
A report issued by the Ryerson City Building Institute (RCBI) last fall noted, “As development across the GTA shifts from sprawl to intensification as required by the province’s Growth Plan, most of the new homes being built in the GTA are in buildings greater than five storeys.”
Intensification promises to repair the built fabric of our core and renew its infrastructure, but thinking about who will be able to live, work, and play in Downtown Hamilton is also important. Robichaud and Thorne touched on this in their responses to questions and tried to convey how land-use planning tools can be used for place-making and to achieve what the Provincial Growth Plan and Hamilton’s Urban Official Plan (UHOP) terms “complete communities”. They also noted that a plan can’t prescribe who will live downtown or what businesses will locate in its storefronts and office space.
Perhaps, the most insightful moments revolved around questions related to affordability and ensuring a diverse mix of people and activities continue to enliven our downtown core—i.e. that it not become simply a theme-park for young urban professionals to paraphrase Ryan McGreal.
YIMBY (or Yes-In-My-BackYard) advocates for abundant housing see reducing impediments to increased supply as key to making housing more affordable in cities. Clearly adding new supply is part of the puzzle, but alone it won’t get where we need to go.

For starters, as the RCBI report notes, we need to determine if we are building the right supply:

As millennials get older and seek larger spaces, and baby boomers downsize from detached houses, we will need housing units that meet the needs and economic realities of these important demographic cohorts. Given the current housing affordability context and projected population increases, the GTA will require more family-oriented housing units in mid-rise and low-rise buildings in comparison to the stock built during the past several years.

Using data for the GTA from Urbanation (co-author of the report) they looked at condo units expected to be delivered in the next 5 years and found the following:

Alarming—for urbanists who favour intensification as a way to curtail sprawl, repair damaged urban fabric, and reduce automobility—the authors conclude that if current development trends continue “the proportion of family-appropriate housing available in location-efficient neighbourhoods (close to transit, employment, schools and services) will decrease, and affordability will further erode” and they argue this “means that young families will have to ‘drive to qualify’ for any type of unit, not just detached housing.”
Intensification as a policy will be seriously undermined if multi-unit family-friendly housing is not built in sufficient quantities. 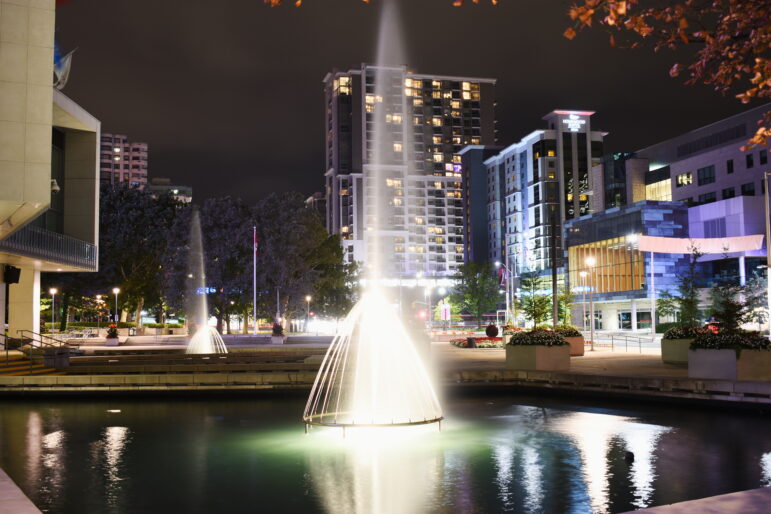 So what does the new draft of Hamilton’s DTSP include to ensure the “right supply” of housing is added via intensification?
First, one of the plan’s “principles”, 6.1.2 (c) Promote Downtown Living, states “the Downtown Hamilton Secondary Plan identifies opportunities for a range of housing types catering to a variety of income levels and household characteristics.”
Second, two of its “objectives”,  6.1.3.3 Create Quality Residential Neighbourhoods and 6.1.3.7 Diversity of Housing, establish the importance and need for a diversity of housing, including recognition that “Downtown’s livability and prosperity is connected to the provision of housing that meets the requirements of a diverse population with varying housing needs.”
Third, under 6.1.4 General Land Use Policies, 6.1.4.10 states “the development of housing with a full range of tenure, affordability, and support services shall be provided for and promoted throughout the Downtown in a full range of built housing forms in accordance with the policies of Section B.3.2 – Housing Policies of Volume 1 [of the Urban Hamilton Official Plan].”
Finally, returning to 6.1.3.7 Diversity of Housing, it is noted that “Providing housing to a wide range of residents that is affordable, secure, of an appropriate size, and located to meet the needs of people throughout their life is the goal of an inclusive Downtown and essential to the creation of complete communities.” 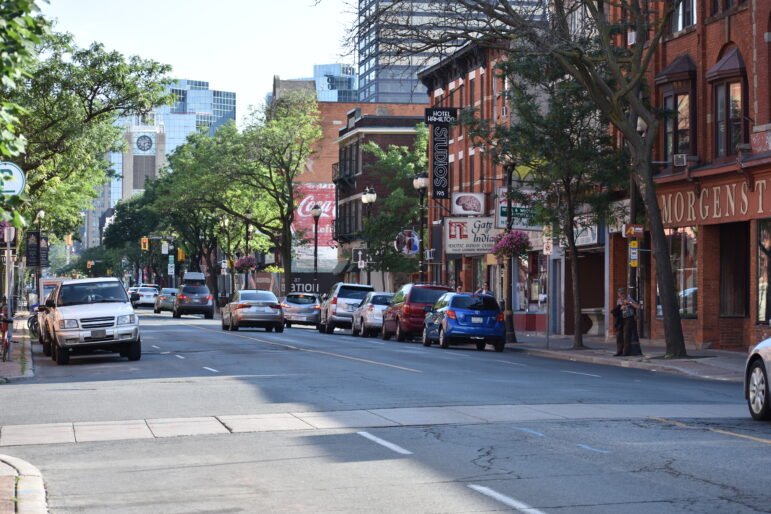 James Street North during the Summer of 2017

The goal of an inclusive Downtown and the creation of “complete communities” conform to the province’s Growth Plan, which states “[t]his Plan is about accommodating forecasted growth in complete communities” and defines them as:
Places such as mixed-use neighbourhoods or other areas within cities, towns, and settlement areas that offer and support opportunities for people of all ages and abilities to conveniently access most of the necessities for daily living, including an appropriate mix of jobs, local stores, and services, a full range of housing, transportation options and public service facilities. Complete communities are age-friendly and may take different shapes and forms appropriate to their contexts.
Technically, support for building and maintaining “complete communities” is already operative in Hamilton’s planning framework as municipal decisions in Ontario must conform to the province’s Growth Plan and the concept is embedded in various ways in policies found in Volume 1, Chapter B of the Urban Hamilton Official Plan (UHOP) adopted by City Council in 2009.
In this context, the policies in the latest draft of the DTSP noted above are significant because they reinforce that a “complete communities” planning lens will be applied to downtown as a planning area.
How might this matter?
Let’s consider the controversy over Brad Lamb’s Television City project.
How much of the debate it engendered revolved around what kind of supply it contributes to our local housing market and what impact it might have on land acquisition costs and therefore the viability of other forms of supply and uses?
A narrow focus on height makes it easy to get caught in an endless repeat loop arguing over whether a proposed building should be 30 or 40 storeys. What kind of units, at what price, and in what form of tenure is not only important, but the more important takeaway based insights shared by Robichaud and Thorne at Mills Hardware last night is that certainty in terms of what heights are permitted is important because it feeds into the valuation of land.
The graphic found on page 3 of the RCBI report (discussed above) provides a glimpse at how land-use permissions and housing forms relate to affordability and demonstrates that the relationship between intensification and affordability is less straightforward if the needs of different households are considered.

So, beyond simply increasing housing supply via plans and policies that encourage infilling and redevelopment of brownfield sites and greyfields (see Definitions in the Growth Plan), planning for intensification must actively work to encourage construction of a diversity of housing forms in a context-appropriate way.
As a recent Evergreen Report on planning and engagement around rapid transit projects noted in relation to the Hurontario LRT:
Mississauga has a unique challenge in achieving suitable development along the downtown portion of the corridor, as its planning regulations have no height restrictions in the downtown which can create a mismatch between the value of the land and the local demand for development. The land use planning process was used to protect some parts of the corridor to ensure context-appropriate development.
The preceding needs to be parsed with care. Mississauga is seeing tall buildings constructed in its downtown. It speaks to a larger planning and development conundrum, especially where plans and infrastructural investment prime land for hyper-development: how to ensure space for the so-called “missing middle” of compact, dense low-rise housing that is generally more affordable for families and larger households than high-rise.
Tackling the tendency toward a small or tall polarity in our cityscape is a problem that requires rethinking the “where” and “how” of intensification—i.e. thinking about it as something that needs to occur more broadly and not just via development on “opportunity sites” in nodes or along corridors designated for change in plans.
Hamilton is a bit different. But not totally different. We can learn from other places that are further down the Smart Growth intensification road. But we are still subject to the same forces and our effective demand—i.e. local housing needs that can stimulate new supply—continues to be, if anything, fragile and uncertain. 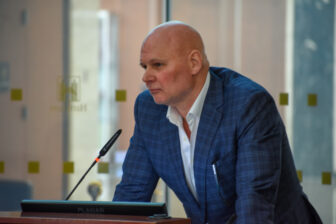 As Brad Lamb put it in a recent appearance on Cable 14’s City Matters, the physical costs to build in Hamilton are the same as in Toronto, maybe slightly higher, but what the market will yield here is much less. That makes land values and soft costs more of a factor in whether a project will be viable.
The inclusion of larger two and three bedroom units in high-rise developments is complicated by the relative cost of existing low-rise houses in nearby inner city neighbourhoods. Simply put, if high-rise condo units are selling for $500-$600/sqft in Hamilton, then buyers would be able to find low-rise housing nearby that is comparable in price or less expensive. That puts a damper on new supply, especially in terms of two and three bedroom apartments (for now).
From this perspective is it possible to better grasp the challenge facing Hamilton city planners. With regard to “complete communities” and “diversity of housing” they are tasked with steering what will mostly be private-sector development. Regardless of how desirable the social component of our city-building aims are, some of them conflict with the exigencies of private investment, which appears set to continue to row the development boat.
So, our planners and City Council must walk a fine line when the most powerful tool they possess is the ability to say “yes” or “no” based on relevant land use policies. Perhaps, the most important takeaway from last night’s event is that both Robichaud and Thorne hinted that a “take whatever you can get” mentality is finally giving way and that’s a big step forward.