Hamilton’s Transit Crisis continues, on Wednesday this week, over 10% of the City’s bus runs had at least one trip cancelled during the day due to a lack of operators caused by Council cuts in early 2017.
Sadly, HSR management’s response to the crisis has been lackluster. The latest example of this lackluster response is a odd decision to devote limited resources to removing the higher capacity 60′ articulated buses from service in the evening.
A year ago today, I pointed out the absurdity of 1-King operating with 40′ foot buses at night when articulated buses are available. Until two weeks ago, the HSR inefficiently ran articulated buses in Stoney Creek at night.
Starting in January, those articulated buses will finally arrive on 1-King in the evening.
However, in the interim, the HSR is assigning operators to remove the articulated buses from service at night.
Friday night, I was at Eastgate transferring to the 58-Stoney Creek Local scheduled for 7:00pm when a 40′ foot bus arrived at the stop about 7 minutes prior to the arrival of the 60′ foot articulated bus that was operating on the route.
The operator of the 40′ bus is assigned every night to removing the articulated bus from service and taking it to the HSR garage. Friday night, the HSR was operating two buses short, one missing from the 1-King and another missing from the 10-B-Line.
Instead of putting this operator into service to fill the missing 6:45pm B-Line, or taking the a 60′ articulated bus and putting it onto 1-King to carry more passengers instead of leaving people waiting in the cold, HSR upper management prioritized optics over service. 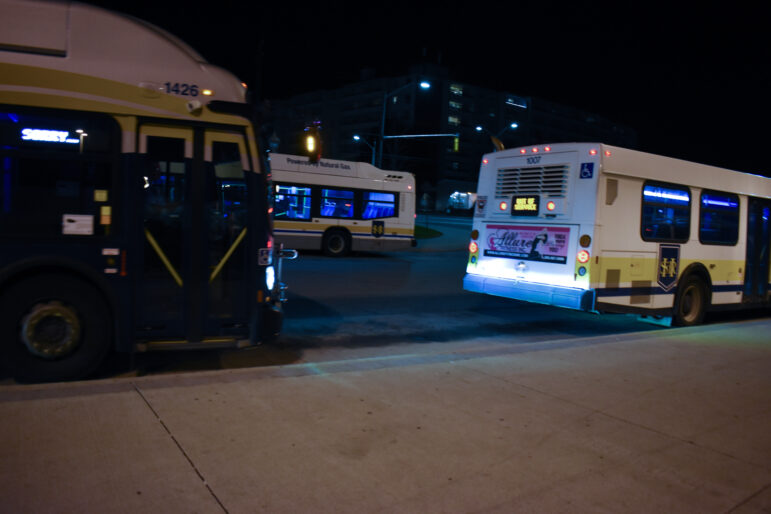 Hamilton articulated bus being pulled from service on December 1, 2017. 1-King bus in the background.

As my bus pulled out of Eastgate, I looked at a long line of people squeezing onto a 40′ bus on King, and watched the 60′ articulated bus drive away to the garage.
Technically, HSR upper management is solving the inefficiency problem of misplacing articulated buses by removing them from service.
However, once again, HSR upper management have shown themselves to be focused on hiding problems instead of actually solving them.
The solution is simple, families switch the family car and van all the time; why can’t HSR managers figure this out?