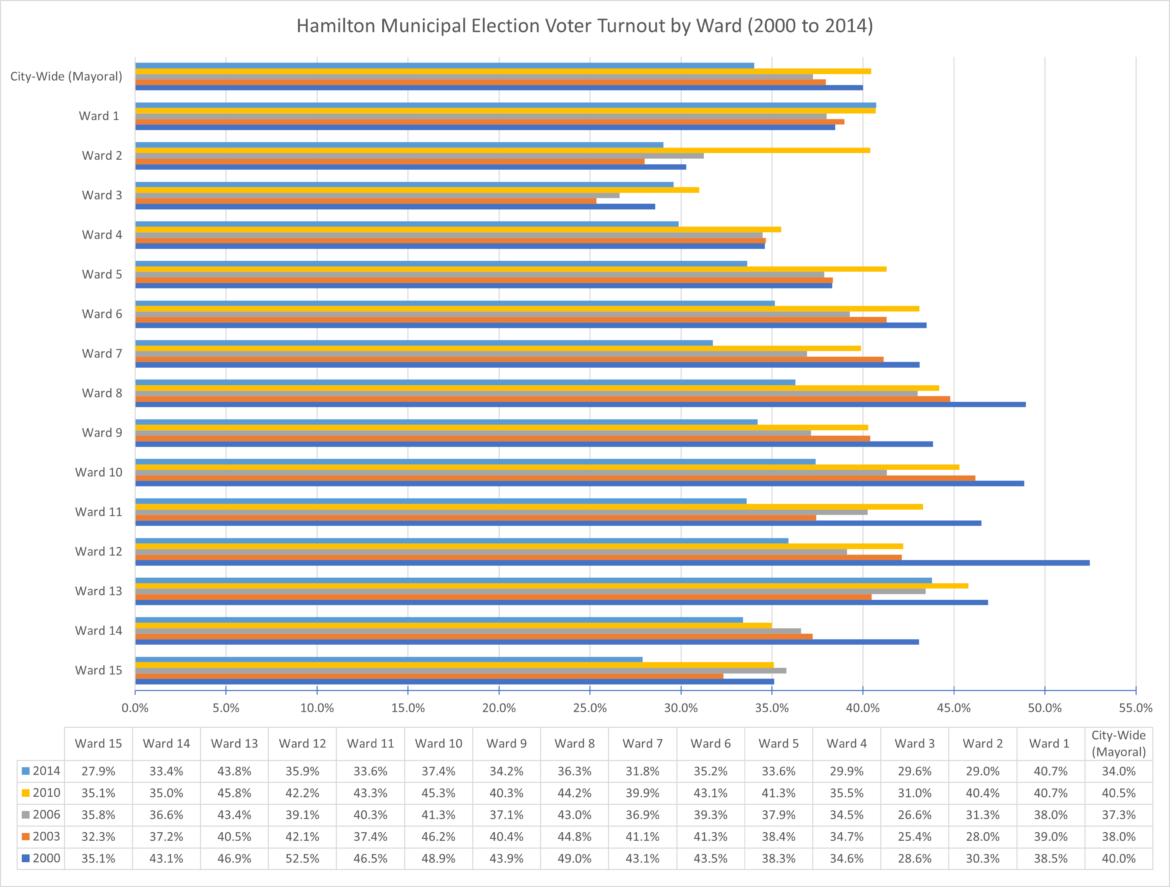 Update: CHCH reporting the City of Hamilton tells them 31,719 advance votes were cast

The City of Hamilton will likely release advance voter turnout numbers on Monday or Tuesday.

The turnout may be a new record high number of advance ballots cast.

There were 17,052 advance ballots cast in 2018, an all-time high, and keeps with Hamilton’s trend of increasing advance voting during the past decade.

There has been no correlation between advance voting and overall turnout in Hamilton since 2000.

If the recent federal and provincial elections are any indicators, we should expect record-low voter turnout.

There were approximately 1.07-million advance ballots cast in the Ontario provincial election earlier this year, up from 700,000 in 2018.

Similarly, in 2021, a record number of advance ballots were cast in the federal election. Overall turnout dropped “near historic lows.”

Voters in Vancouver voted for their mayor, councillors, and other municipal officials yesterday.

Before election day, there was a significant increase in the number of advance ballots cast compared to recent elections.

The City of Toronto, which also completed its advance voting days yesterday, is reporting a decrease in the number of advance ballots cast this year.

If you asked me a few months ago, I would have predicted record voter turnout this October.

After all, this is a change election for Hamilton.

There is always a percentage of the population which is content and does vote when their municipal government is fulfilling the basics.

There are variations of sayings that so long as the garbage is picked up, snow is removed from roads, and clean water comes out of the tap, the local politician will keep their job.

Frustration motivates people to vote, and when frustrated people show up to vote, incumbents lose.

This happened in London (Ontario) 2014, Winnipeg 2014, and Burlington 2018 – all elections which saw incumbents swept out of office by frustrated and disappointed voters.

Last election (2018), our neighbours in Burlington booted three of the four incumbents seeking reelection on their seven-person council.

Is After-COVID Voting Changes a Trend?

Ask me now what my prediction for Hamilton’s voter turnout is and I will respond that I have no idea.

If you say to me that I must place a bet, I will gamble that voter turnout is going to decrease – even if there are a record number of advance votes cast.

In 2014, the number of advance ballots cast in Hamilton increased slightly compared to 2010.

We’ll find out next week what happens.

One thought on “Joey’s TPR Election Blog: Even If Advance Voting Is Up, Overall It May Go Down”