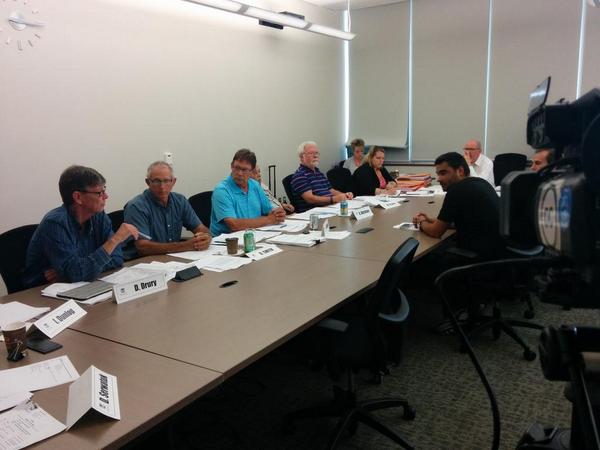 Hamilton Committee of Adjustment during a 2014 meeting on Sarcoa.

The Committee of Adjustment (CoA) approved three secondary dwelling units (SDUs), a series of severances, rezoned a subdivision proposal – despite the City’s planning staff saying it was not the proper process, and approved the final variances for the new Hamilton Urban Core Community Health Centre at 430 – 436 Cannon Street East.

The CoA announced they will resume in-person hearings on May 26, 2020. The CoA will stop streaming their meetings and no longer allow public participation by video and phone.

The CoA rejected an attempt to sever a farm property within the Greenbelt. The owner of 1130 Ridge Road (Stoney Creek) hoped to keep the existing house and sell the remainder of the land.

An application to further decrease the parking requirement at the Corktown Plaza was tabled.

The CoA approved three SDUs this week, on split votes with some members continuing to oppose SDUs because they are usually rentals. A few weeks ago, one member stated that approving SDUs will make Hamilton’s neighbourhood’s “into ghettos”.

CoA unanimously approved the conversion of an existing detached accessory building, which has a basement, into an SDU.

SDUs are not intended to have basements, and the SDU by-law sets the maximum size of a unit at 75 square metres. [Variances are usually permitted for more space, with conditions] Due to the basement, this SDU is just over twice the permitted size.

City’s planning staff wrote “SDU will not set a precedent as it is often not common to have an existing accessory building with a basement. This situation is unique as the basement unit has helped to increase the GFA of the SDU.”

Ward 10 Councillor Maria Pearson stated she is “concerned of a precedent being set. This is not an old building, this is a fairly new building … I am okay with this being approved.”

“I do notice that the basement has a full washroom in it,” Smith noted. “So two full washrooms in this.” Other members of the CoA joined in expressing concerns the owner will divide the permitted single unit into two.

The City will monitor and enforce bylaws.

CoA unanimously approved variances for this SDU. The house is located near the intersection of East 39th and Crockett Street, one block west of Upper Gage Avenue.

One CoA member expressed concern that a storage room within the unit could be converted into an additional bedroom that is not permitted within SDUs.

The owner of the property is returning for additional variances for an already approved secondary dwelling unit.

The new variances are required for a second parking spot where zoning only permits one spot to ensure at least 50 percent of the front is landscaped.

The second spot will reduce landscaping to 12 percent.

Environment Hamilton’s Lynda Lukasik spoke to the CoA seeking to make the use of a permeable service for the driveway a condition of approval.

CoA member Nancie Mleczko remarked she is concerned there is “a little bit of a lobbying process” due to an increase in public interest delegations to the committee.

The application was approved, without conditions.

This site is north of Burlington Street, with an existing small bungalow on the property.

The developer who owns the site is planning to replace it with a three-storey single-detached house as permitted in the zoning bylaw.

They plan to have an SDU within the new home, which is an as-of-right permission.

There are two variances requested:

1) 40% landscaping where 50% is required.
2) Two parking spots at the front, whereas bylaw permits only one.

Environment Hamilton wrote they support the SDU but do not support the variances due to an existing street tree at the front of the property.

EH states they oppose the decrease in landscaping in front of the house.

There is an existing street tree in the front which EH wants to be protected.

EH encouraged the applicant to use street parking instead of adding a second parking spot.

The variances were approved.

This week’s land severances, with the exception of a rural application, all sought to split larger lots to have two homes where there is presently one.

CoA denied the application at 1130 Ridge Road in Stoney Creek.

The owner sought to split a farm property that is within the Greenbelt.  The Greenbelt plan imposes strict conditions to protect farmland.

The agent for the owner tried to argue the land cannot be farmed. The agent, who is not a farmer, proceeded to argue with CoA members who are farmers.

At numerous points during the 10 minutes of this hearing, the agent interrupted members of the CoA to repeatedly state he was going to the “Ontario Municipality Board” to get approval for his plan.

[I clipped a highlight video and posted it to Twitter here] 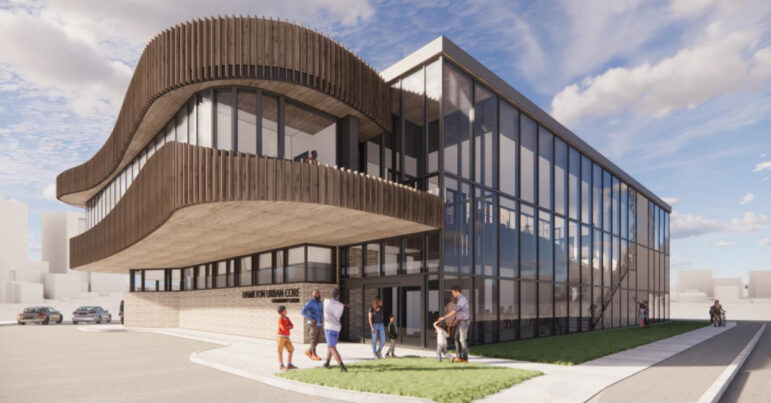 City planning staff recommended approval of the variances for landscaping waivers, sideyard setbacks, the location of the main entrance not being directly out to Cannon Street East, and parking lot design.

There was a letter of opposition from local resident, and former Ward 3 Council candidate, Laura Farr.

A nearby neighbour, who delegated by telephone, stated he is opposed to the health care centre because it serves “mental people”.

“My objection is this. First and foremost you got to have like mental people there. You have two schools. you have a high school and you have an elementary school,” the man opened. This neighbourhood is already filled with homeless people. Drug users every day, I pick up needles in front of my house.”

“Secondly, my property, the value of my property is going to go down.”

He continued to refer to “mental people”, drawing a rebut from the CoA chair.

The CoA quickly approved the application after hearing the delegate. 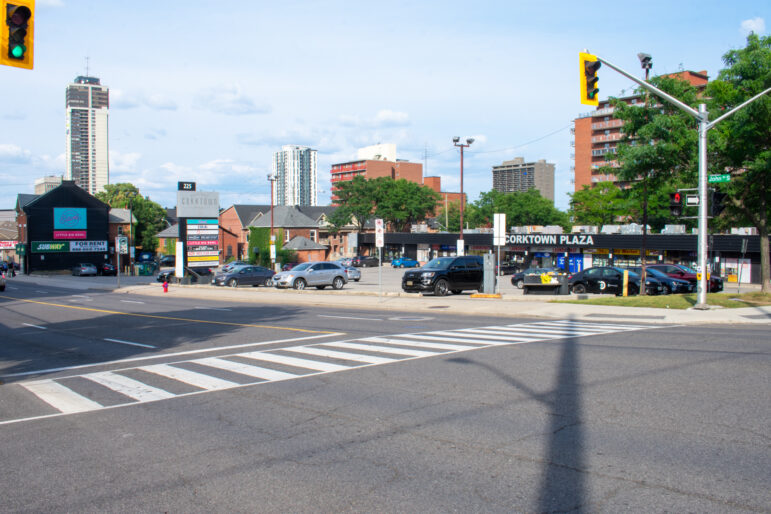 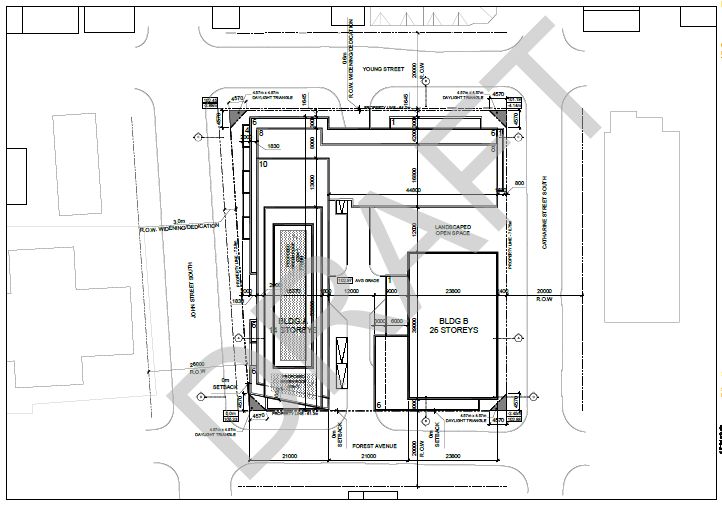 The Corktown Plaza redevelopment is seeking further parking reductions beyond what was approved by Council in February 2021.

In 2021, Council approved the two tall building redevelopment for 769 units with a parking ratio of 0.6 spaces per unit.

The developer is now seeking a rate of 0.44 parking spaces per dwelling unit.

Staff noted, “The City of Waterloo requires a parking rate of 0.65 plus visitor parking” within 800 metres of the Waterloo LRT line.

There were letters of opposition from area residents.

The developer tabled their application to negotiate further with city staff.

The owner of 130 Wellington Street South is seeking to legalize four units in this large detached house. The house is presently an illegal six-unit multiplex.

For a variety of reasons, City staff did not support the variances.

The CoA denied the application.

What makes this file noteworthy is the owner is at the Ontario Land Tribunal for a zoning by-law amendment (ZBA) to legalize the existing six units.

In February of 2021, Council voted down the ZBA application at the request of Ward 2 Councillor Jason Farr. Farr agreed with neighbours who stated there are too many rental units in the Corktown neighbourhood.

The owner appealed to the Ontario Land Tribunal. That appeal will be heard over six days beginning on Monday, May 30, 2022.

The developer, 5000933 Ontario Inc. – A. DiCenzo, is seeking ten variances which staff state are effectively an attempt to rezone portions of the site.

A full development application was submitted to the City on March 20, 2022. Staff state they are reviewing the file, the variances are premature, and that rezoning is required for a portion of the property.

The CoA, which serves at the pleasure of Council, approved the “variances” as requested by Councillor Pearson.