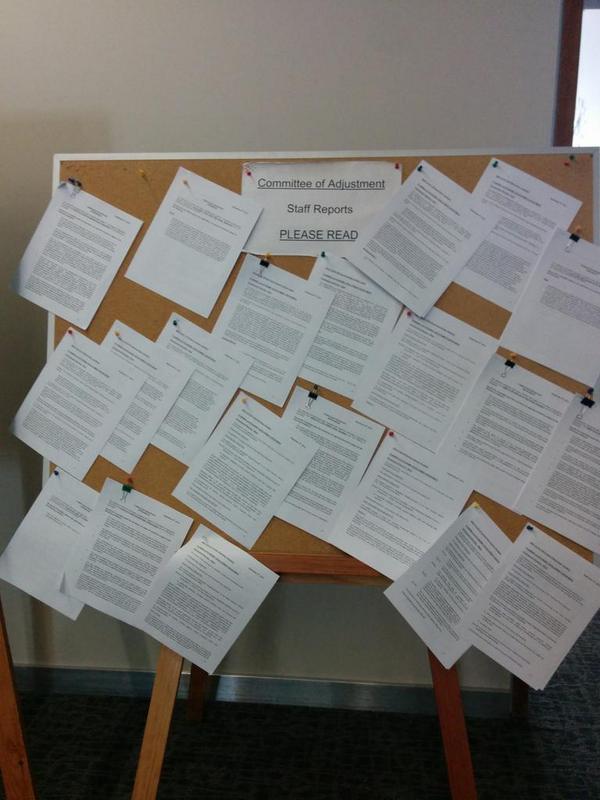 A board outside the Committee of Adjustment hearing room with the staff reports for public viewing.

Let’s quickly highlight a statement by a Committee of Adjustment member during this week’s hearings.

“I’ve found that in the last couple of meetings, I’m going to say in the last month or so we’re getting unsolicited support from people who are not neighbours and are not affected by the particular applications directly.

I guess part of me is feeling that it’s a little bit of a lobbying process.

I don’t mean that in a formal way, but I know between yourself and that particular architectural group, you guys are super, super supportive of the additional housing units. And I totally am as well.

I am just not sure how comfortable I am feeling that organizations are out there lobbying on behalf of each individual application.

Only my two cents worth doesn’t need a response.

While I do appreciate the work that you do, I just find it a little bit too much for an individual having outside agencies. As I say, advocate for them.”

Not Lobbying, CoA is a Public Hearing

Moments prior to the remarks, Lukasik spoke to an application to allow a two-car driveway in front of a house. The driveway will remove most of the front lawn, leaving only 12 percent of the property with landscaping.

Lukasik encouraged the applicant to use a permeable surface for the parking, and for the City to make this a condition of approval.

Speaking in a public meeting is not lobbying, which Mleczko seems to understand as she stated she does not “mean that in a formal way.”

The Planning Act guarantees the right of anyone to speak in front of both Council’s Planning Committee and the Committee of Adjustment.

The CoA enjoys all the same powers as City Council’s Planning Committee, the only difference is they must classify their decisions as “minor”.

A few years ago they approved a 33-storey tall building as a “minor variance” from a six-storey height limit, and just this week rezoned a property in Ward 10.

Environment Hamilton is an advocacy organization. Their submissions to the CoA are always regarding environmental concerns.

This is entirely appropriate and part of the democratic process.

Maybe Mleczko should consider writing a letter to the Minister of Municipal Affairs with her concerns. I suspect the Minister will determine Mleczko’s “two cents worth” “doesn’t need a response.”

One thought on “Joey’s Notepad: CoA Member Concerned about “Lobbying” by Environment Hamilton”