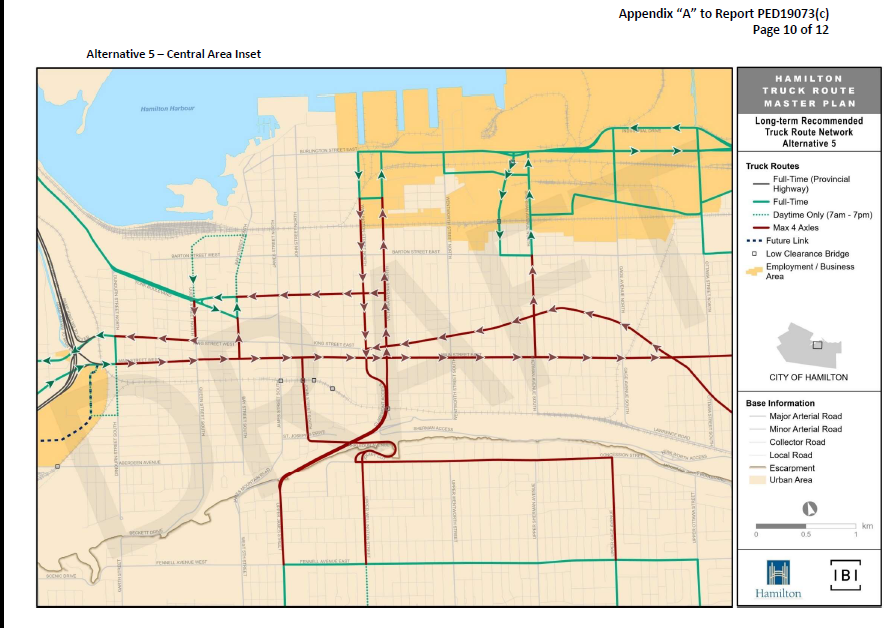 Hamilton’s agri-industrial industries say the new recommended truck route will increase their cost of business, make Hamilton a less competitive location, and they may delay, or even cancel, planned investments in Hamilton.

The new proposal restricts trucks to four axles or fewer in the Downtown Core and most of King and Main Streets in the Lower City.

Four axle vehicles include delivery vans, utility trucks, dump trucks, and cement mixers. All trucks with five or more axles will be prohibited from Downtown unless making a local delivery.

The Sub-Committee’s recommendations must be approved by Council’s Public Works Committee and ratified by the whole Council at their April 13 ratification meeting. 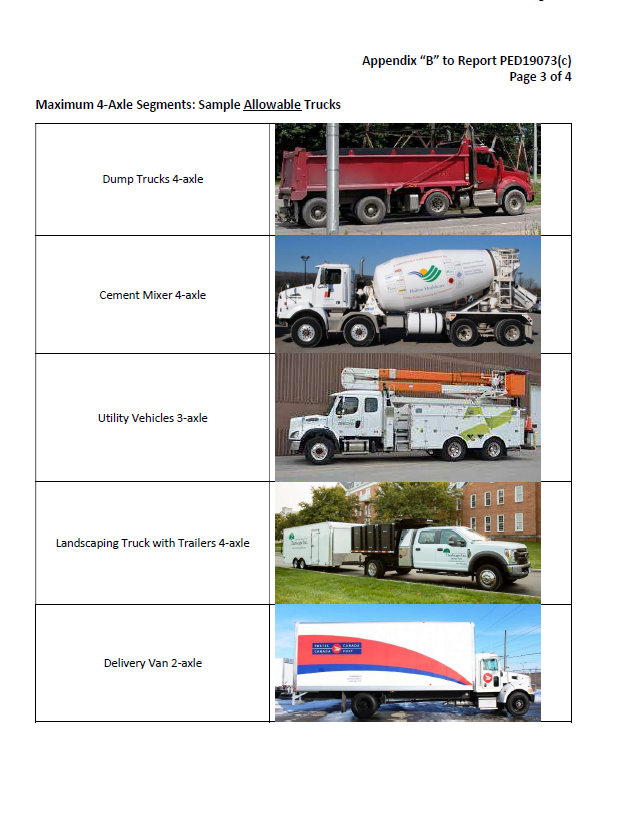 A City of Hamilton staff diagram showing examples of four-axle trucks which is the maximum weight permitted to traverse across Hamilton’s Downtown and older residential area arterial routes.

Residents of the Lower City who delegated offered varying opinions regarding the change.

Some were satisfied with the change, others say it does not go far enough – Council should ban trucks.

Bunge Canada state they are reviewing their planned capital spending, saying the new truck restrictions harm the competitiveness of their Hamilton operation.

A group of Waterdown residents, who live on Fellowes Cresent, wrote Council to state they are concerned prohibiting trucks from using Hamilton Street overnight will increase the number of trucks on Parkside Drive and generate additional noise impacts for their homes.

They are requesting the City implement noise mitigation measures, reduce the speed limit on Parkside Drive, and consider excepting trucks servicing the Fortinos and Sobey grocery stores from the overnight restriction.

In a written submission, the Hamilton Chamber of Commerce called on councillors to allow a “time-managed” allowance for larger trucks to operate in the Lower City to “maintain network efficiencies” to access Highway 403.

“Failing to provide clear options to drivers to access this critical highway link” creates the risk of trucks using “undesignated routes” to access the 403, “clearly increasing a risk to the health and safety of our community,” wrote Interim Chamber CEO Marie Nash.

Nash wrote that the Chamber is concerned the new plan will “negatively impact Bayfront businesses that the City of Hamilton is eager to court and retain.” 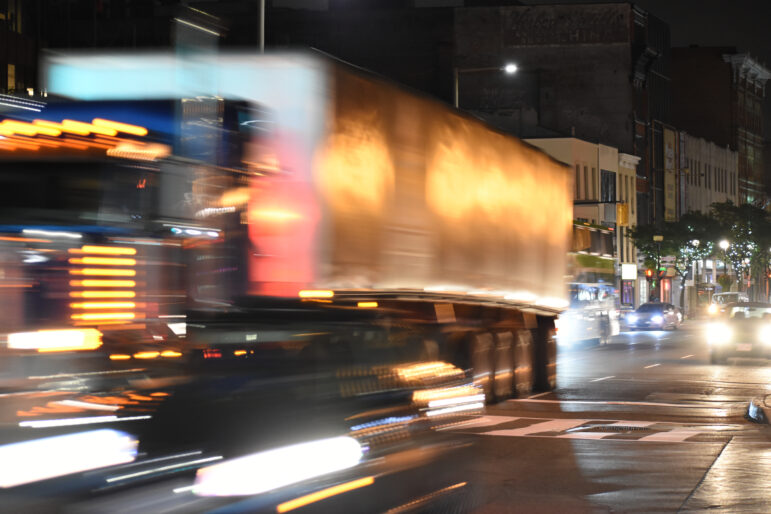 The Hamilton-Oshawa Port Authority asked Council to allow trucks to access Highway 403 from the western piers of Hamilton Harbour.

“We have to find ways to successfully share the road between truck users and other users,” Larissa Fenn, HOPA’s Director of Public Affairs, told councillors.

“The elimination of in-city routes … does create a chill on investment, disruption of supply chains … and it creates a situation that builds in higher GHG emissions in a very systemic way, contrary to the city’s own climate change goals.”

Fenn stated the Port recognizes that Victoria Avenue has both residential and institutional uses and supports measures to make “make travelling, living and working in these areas better, safer for everyone” by adding “mitigation measures like dedicated truck lanes” and “protected cycling infrastructure.”

Resident Leah Avery delegated while holding her baby in hand.

“Just this morning, my baby put his finger into black soot on the window and then licked his finger,” she stated.

“We have to worry about some of the worst air pollution in the country as a direct result of industrial trucks saving eight to 10 minutes on their route.”

Avery called on councillors to live up to the City’s motto of Best Place to Raise a Child and remove trucks from Lower City neighbourhoods.

ArcelorMittal Dofasco says they plan to seek special permits to move steel between their mills in the industrial sector and a Transcare Logistics storage facility near the CPR Aberdeen Yard beside the Chedoke Golf Course.

“Our primary presence at the Transcare facility is for coil storage, it is not necessarily constituted as being used for the purpose of trans-loading to rail.”, stated Dofasco’s Kyle Reid.

He told councillors, “We’ve also been looking at the potential opportunity of permitting the in-city route between our facilities, both AMD and Transcare, which would be intended to reduce the number of trucks required to transit through that laneway, by allowing greater payloads on each truck. Therefore reducing the number of trucks, we would actually require to transit that route. If we were to obtain said permits, the highways would then become ineligible for transit because of MTO restrictions.”

Hugh Loomans of Sylvite Agri Service is concerned Council does not realize the importance of the agriculture sector to Hamilton’s economy. He stated Sylvite wants to “minimize our impact upon the community.” At the same time, he says, they need an “east-west access route” to move goods efficiently.

The Ontario Trucking Association’s Lak Shoan says the
City needs to retain the 403 East-West Access Route to ensure the competitiveness of Hamilton industries.

He says the new restrictions will increase costs and “lead to a corresponding growth in operating costs, which simply can’t be absorbed by fleets.”

The costs will “necessitate a trickle-down effect throughout the supply chain, increasing costs for businesses carriers and consumers.”

The OTA says the City can maintain existing truck routes and should focus on increased enforcement to address speeding, emissions, and road safety.

Gabe Pitura, representing the Residents of Dickenson Road East, says the City needs to prioritize building a “bypass link” on the south end of Hamilton (Red Hill to Airport) to divert trucks moving past Hamilton to Caledonia.

“The illegal truck traffic has created a large safety risk for the residents, including children, seniors, cyclists, cycling clubs, joggers and pedestrians accessing the rail trail. In fact, there have already been two fatalities at the rail trail junction on Dickinson Road East alone.” 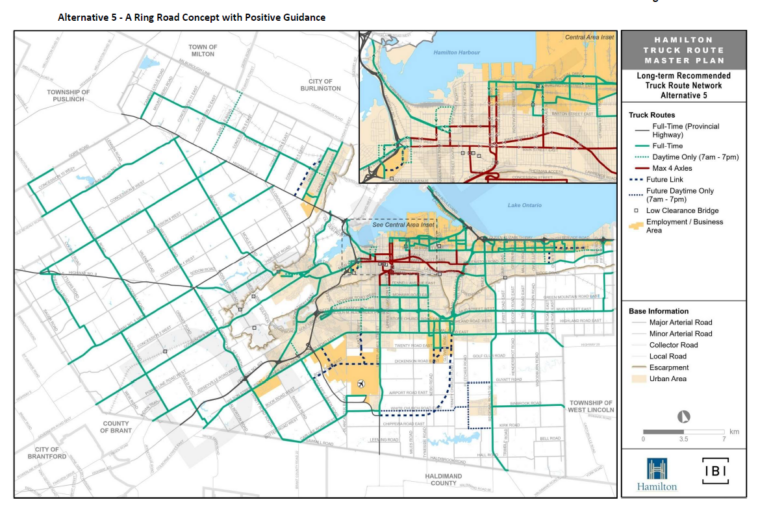 Rene Lemay, Plant Manager of Bunge’s Hamilton operation, writes that the company may decrease its Hamilton capital investments and is already delaying some spending.

“A proposed multi-million dollar project to expand one of our product lines is now delayed from 2023 to at least 2025,” they write. “Pre-approval of long lead time equipment has been pushed back until transportation and related economic consequences are better understood.”

“Cutting off direct access to and from the 403 will have negative effects on Bunge’s competitiveness by increasing transportation costs, thought increased fuel consumption and increased delivery route times.”

City staff will complete the terms of reference for the study and present it to the next term of Council as part of the 2023 City capital budget.