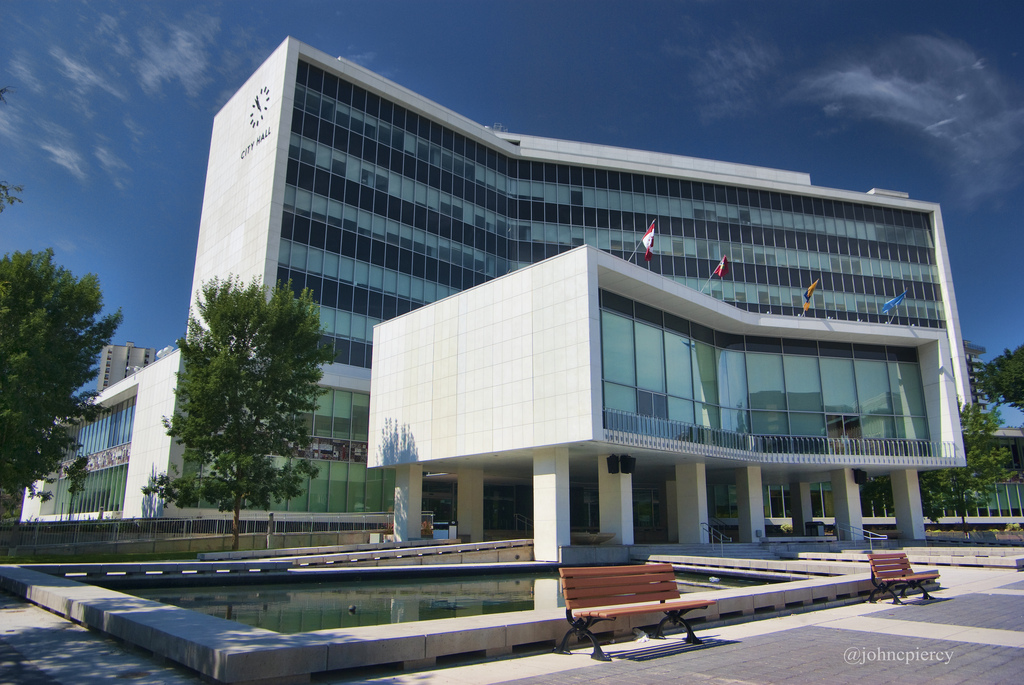 Road safety will be the dominant discussion at Council’s Public Works Committee on Monday.

There are two notices of motions responding to recent pedestrian deaths and serious injuries, the new truck routes which will forbid heavy trucks in the Downtown Core and much of the Lower City, and a staff recommendation to expand the Red Light Camera program to ten more intersections.

Also on the agenda this week: preparing for Highway 403 weekend closures, 2020 structural inspections of City of Hamilton bridges, and a few ward councillor budget spending motions for safety and sidewalk improvements.

The meeting begins at 1:30 pm on Monday, April 4, and will be livestreamed on YouTube.

There are two notices of motion following the recent deaths and serious injuries suffered by pedestrians at two of Hamilton’s most notorious intersections.

On Wednesday, March 30, 2022, a Westdale Secondary School student walking home from school “was struck by a 2016 Hyundai motor vehicle that was being driven by a 49-year-old Hamilton male,” and suffered critical injuries at the intersection of Main Street West and Dundurn Street South.

The councillors of the wards where the collisions occurred, Ward 1’s Maureen Wilson and Ward 3’s Nrinder Nann, are seeking road safety reviews. 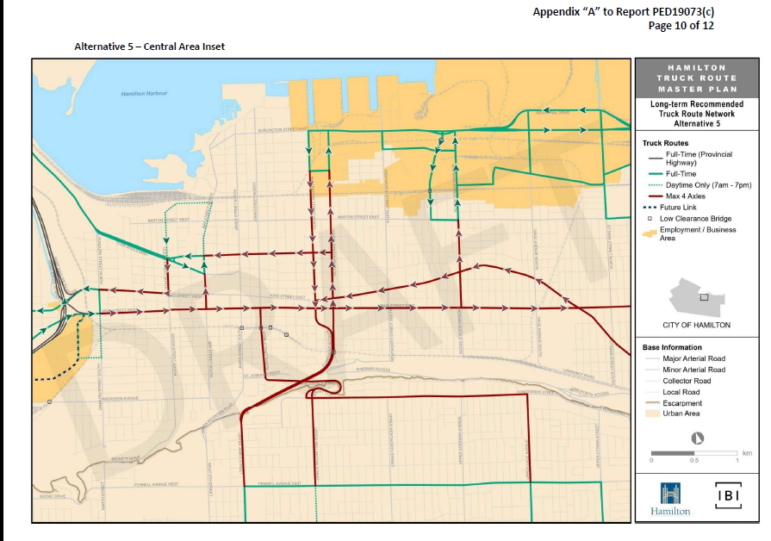 Councillors will vote to ratify last week’s recommendation from the Truck Route Sub-Committee to prohibit heavy trucks from cutting through Hamilton’s Downtown and along arterial roads in older residential areas of Hamilton.

The sub-committee voted 7-0 to approve the changes. Lower City residents who delegated last week were mostly supportive of the change, with some calling for a complete ban. Business representatives, the Hamilton-Oshawa Port Authority, and the trucking industry say the changes will harm Hamilton’s economic competitiveness. Full story on TPR here: Council’s Truck Committee Votes to Axe Heavy Truck Cut-Through Routes.

The installation of the cameras will add approximately $820,000 to the annual operating cost of the red light camera program, this includes the cost of administration and the legal/court services costs.

The City says it issued approximately 19,600 red light camera tickets during 2020 at 32 camera locations. The City says the ten new locations have a “potential for an estimated increase of approximately 6,000 additional charges [tickets] filed annually.”

Staff state red light cameras are effective at decreasing right-angle collisions by 58 percent and decrease “injury/fatal collisions associated with this type of collision” by 65 percent compared to the three-year period before cameras are installed.

Ward 2 Councillor Jason Farr is moving a motion to spend $30,000 to install a pedestrian crossover with raised crosswalk on Harbour Front Drive at the marina access road and $10,000 for a speed cushion on the Drive approximately 80 metres north of Bay Street as well as painting a yellow centre line.

Ward 6 Councillor Tom Jackson is moving a motion to install three speed cushions on Princeton Drive at a cost of up to $21,000.

Ward 1 Councillor Maureen Wilson has a motion to spend up to $240,000 to repair sidewalks, curbs, and driveway aprons along two kilometres of various streets in Ward 1. The streets named in the motion are Sanders Boulevard, Pearl Street S, Kent Street, and Breadalbane Street. 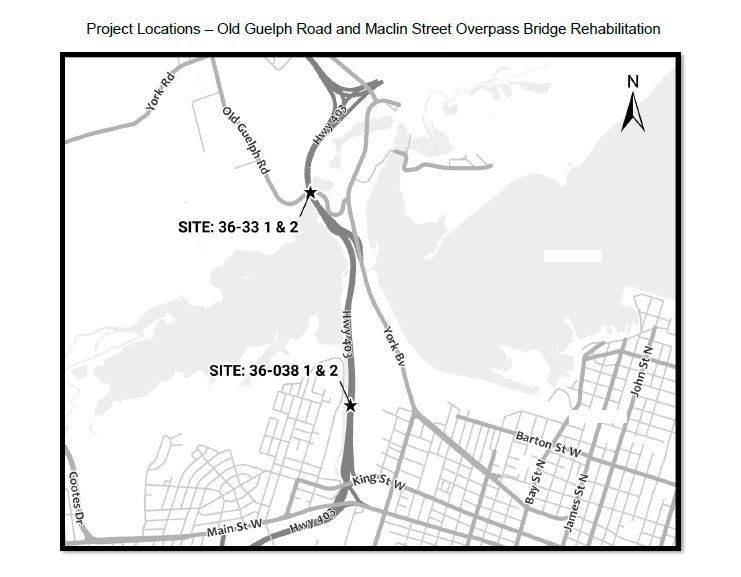 The MTO will replace the Highway 403 Macklin Street overpass and the Old Guelph Road overpass.

“Two full weekend closures, one direction at a time, will be utilized to complete the work and during the closures, traffic will be detoured onto the Lincoln M. Alexander Parkway, Red Hill Valley Parkway, York Boulevard and Queen Elizabeth Way (QEW),” writes Hamilton Acting Director of Transportation Operations & Maintenance Mike Field.

“The two full weekend closures will be coordinated with the City and the MTO and City will develop a robust communications plan to inform the public of the
construction, closure and detour.”

Dates for the closure are not finalized. 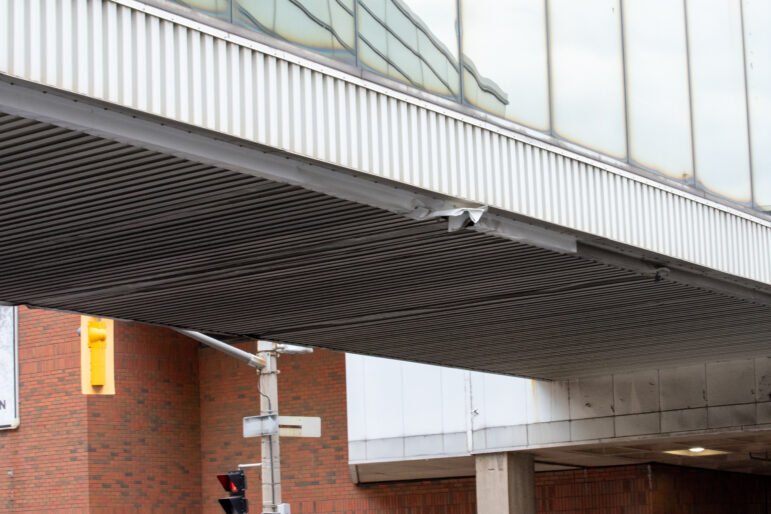 Cosmetic Damage on the Sheraton to Convention Centre Pedestrian Bridge

The City is releasing its 2020 Bridge Ontario Structure Inspection Manual summary report on the PW agenda.

Two firms were engaged to inspect both City owned and non-City owned bridges. The consultants found a total of 22 City structures and 2 non-City structures with “urgent and/or critical works as defined by inspection standards.”

The City immediately removed loose concrete on the Upper Sherman Avenue overpass above the Lincoln Alexander Parkway. Other immediate repairs were “safety issues related to performance deficiencies of the steel beam guide rail at Bridges 234 and 244, and a missing utility access hole lid at Bridge 314.”

Many of the deficiencies found were railings needing repair and broken or heaved concrete along the pedestrian walkways of bridges.

The City does not spend enough on infrastructure to keep up with road and bridge preventative maintenance. The City’s infrastructure deficit is over $3-billion and growing.