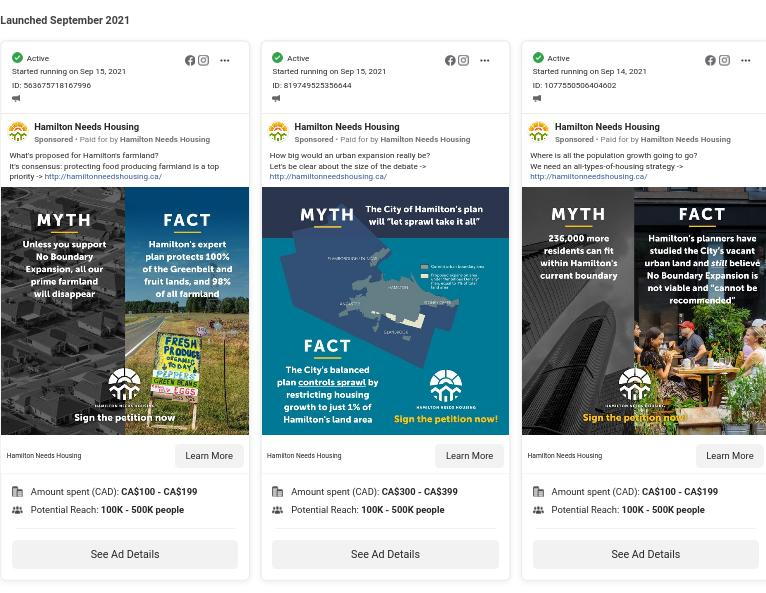 If you live in Hamilton and use Facebook, you’ve seen the ads from Hamilton Needs Housing.

You know the ones which started with attempts at memes such as “We finally bought a house. Bad news is it’s an hour away … we just can’t afford Hamilton” and are now a series of graphic ads.

Hamilton’s development industry is behind the HNH campaign, coming together to hire StrategyCorp Inc to operate their advertising and lobbying campaign.

HNH’s argues for the City of Hamilton planning staff recommendation to expand Hamilton’s urban boundary by 1,340 hectares to accommodate expected growth until 2051.

The HNH campaign is currently running five different ads on Facebook, spending around $300 per day on them.

As of Sunday evening, Facebook reports they’ve spent over $7,200 on ads, of which nearly $2,000 was in the past week alone. The amount of spending is increasing each week.

For the $7,200, the HNH ads have been seen by tens of thousands of Hamiltonians and sparked discussion. Facebook ads are effective. (To say nothing of “earned media” resulting from the ads such as this post.)

A few of the current ads argue the proposed urban boundary expansion is “just 1% of Hamilton’s land area” and “Hamilton’s expert plan protects 100% of Greenbelt and fruit lands, and 98% of all farmland.”

Another cites the City of Hamilton planning department’s position that projected population growth cannot fit within the existing urban boundary.

The ads are part of a strategy to identify potential supporters before the October 25 city council meeting which will decide the urban boundary issue.

While the majority of the responses and comments on Facebook are negative, the campaign benefits from identifying opponents to avoid spending further money advertising to them.

What effect the campaign will have remains to be seen.

You can view the ads and spending information on Facebook here.