The City of Hamilton mailed 215,822 surveys to households across Hamilton. 8,233 of the postage-paid surveys were filled out and mailed back to City Hall.

The City offered a complimentary email survey that anyone could fill out. There were 10,154 online responses.

The vast majority of online responses were generated from the Stop Sprawl HamOnt (SSHO) website. Staff state these automated emails represent 81.7% (8,299) of all email responses.

Only 1.5% of the online responses favoured urban boundary expansion, 97.4% opposed expansion, and 1.0% offered other suggestions.

City staff state respondents in favour of boundary expansions shared common themes regarding housing options, supply, affordability, and farmland values, among many. They cited demand for ground-oriented housing over apartments, increased housing costs related to supply, that land is more valuable within the urban boundary, and farmers should be able to sell their land in the proposed expansion areas.

Those opposing expansion cited themes regarding underutilization of land within the existing urban area, climate change, infrastructure costs and deficits, and farmland protection for food security.

Those selecting Option 3 provided other suggestions, including a “desire for a growth option that has higher intensification rates than the Ambitious Density scenario and therefore results in a lesser amount of land required for expansion”, development of vacant lands and buildings within the existing urban area, and the addition of secondary units. 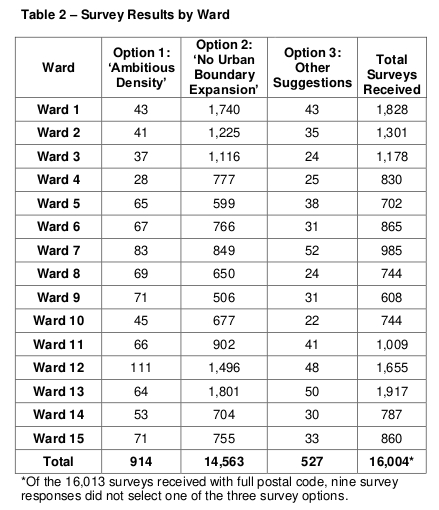 City staff say there were 1,166 responses received after the July 23 deadline to return surveys. These were 44.1% in favour of urban boundary expansion, with 5.3% selecting other suggestions.

In 2020, the Ontario Progressive Conservative government passed regulations regarding municipalities to play for urban boundary expansion up to 2051 and to include new ground-oriented housing in their official plans.

Municipalities have until July 2022 to expand their urban boundaries or face the risk of the Ontario government imposing an expansion upon them.
Hamilton is expected to need 110,320 new housing units by 2051 to meet population growth.

Hamilton City Council can vote to keep a boundary freeze and leave it to the Progressive Conservatives to decide if they wish to impose an expansion themselves.

The cost of the survey was approximately $60,000 for printing, distribution, and return postage.

Council will debate urban boundary expansion during a special meeting on October 25, beginning at 9:30 am.

The full staff report on the survey is available on the City of Hamilton website.