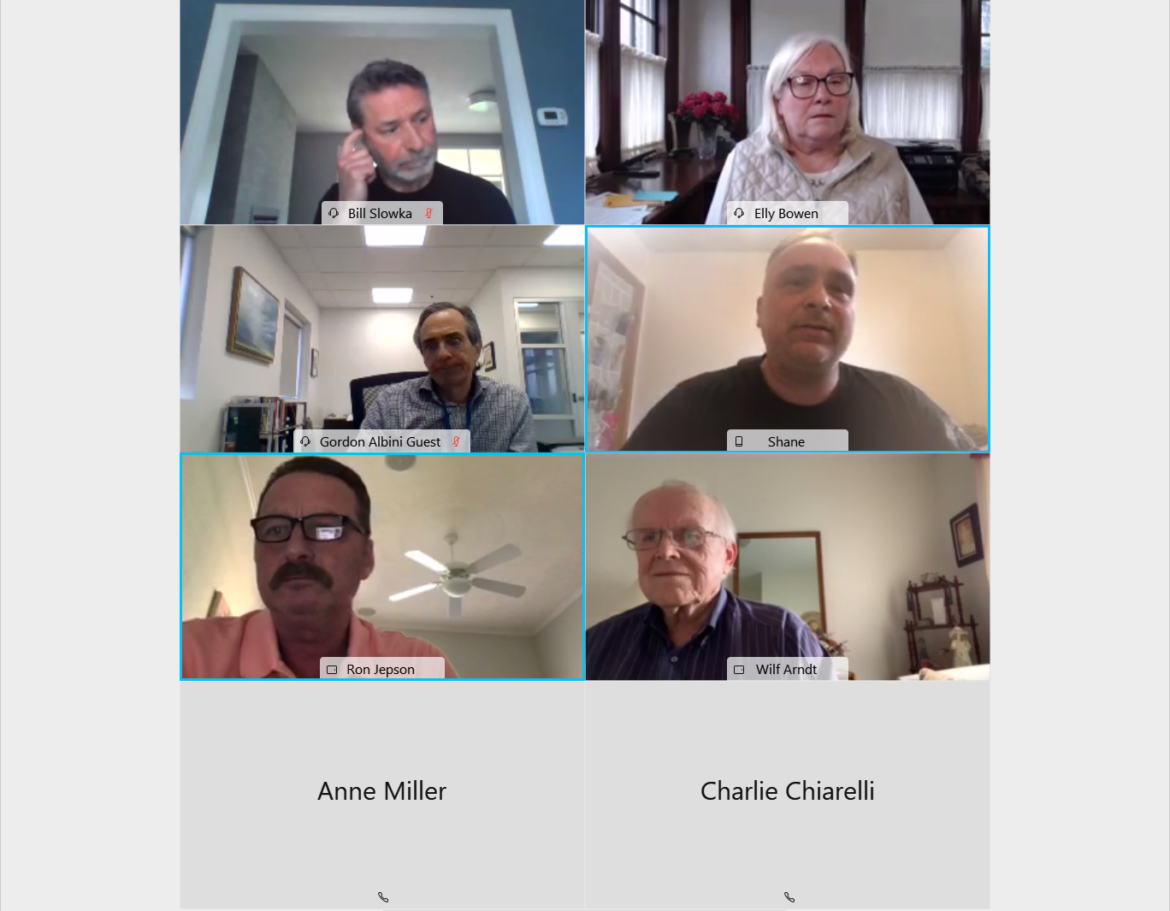 Hamilton Farmers Market Board of Directors during a WebEx meeting on April 12, 2021

The Hamilton Farmers’ Market Board of Directors blew-up during Monday’s meeting in one of the worst displays of dysfunction on a Board known for being dysfunctional.

Vendor representatives Charlie Chiarelli, Coleman, and Ron Jepson have been members of the Market Board since its creation in 2015 and have reached the six-year limit for being on the Board.

The three, who have formed a bloc on the Board, sought to have the term limit rule nullified by bringing a motion to request City Council amend the Market Board by-law.

Presently, the by-law states “no Director shall serve more than three (3) consecutive terms or six (6) consecutive years on the board”.

Chiarelli and Coleman were both involved in the by-law’s creation.

Coleman, who is chair of the Board, relinquished control of the meeting to vice-chair Elly Bowen to introduce his motion. Bowen is a citizen member of the Board.

Upon taking control of the meeting, Bowen declared that Chiarelli, Coleman, and Jepson each had a pecuniary interest in the matter and thus were ineligible to discuss or vote on the motion.

The meeting erupted in yelling between citizen and vendor members.

This is the latest crisis to engulf the Board, which has been dysfunctional for years and subject to a September 2020 consultants report calling for it to be disbanded.

The report stated the Board cannot function due to an entrenched group of three vendor representatives who are misusing their positions to advance their own interests over the greater interests of the Market. The report noted ongoing bullying and “verbal abuse” of citizen board members.

In 2019, two citizen members resigned citing this bloc’s behaviour as the reason.

The report found the bloc of three engaged in “deliberate obfuscation that drags out meetings to the point that everyone becomes frustrated and the agenda cannot be completed”.

Stu Laurie wrote of frustration “with the aggressive posturing of some of my fellow board members and the toxic environment that often inhabits our meetings and can no longer be a party to this in good conscience”.

Marisa Di Censo, a school principal who served as chair for the first two and a half years of the Market Board, wrote in her resignation letter “I can no longer, as a matter of personal integrity, be part of the Board, whose focus has shifted to the demands of one stakeholder group at the expense of the wishes and needs of other stakeholders”.

Municipal Conflict of Interest Act and the Market Board of Directors

The Market Board is a Local Board under the Ontario Municipal Act to which the Municipal Conflict of Interest Act applies. The MCIA requires members to recuse themselves from discussing any matter in which they have a pecuniary interest.

In this case, Chiarelli, Coleman, and Jepson held a personal stake in the outcome – their positions on the Board effect their business interests.

Under the MCIA, it is the responsibility of individual members to declare conflicts. The presiding person in a meeting does not have the power to enforce conflict rules. Any individual who believes a conflict exists must apply to the municipal integrity commissioner to make that determination.

Bowen did not have authority to declare Coleman’s motion out of order.

The Yelling Between Factions

What followed was a series of accusations being made by the vendor bloc against the citizen members. Coleman said the citizens have a conflict-of-interest in not being vendors.

Chiarelli accused the citizen members and market manager Bill Slowka of conspiring against the vendors by advertising market Board vacancies in the market. Four other vendors expressed interest in being vendor reps.

Chiarelli yelled at citizen member Gordon Albini for granting COVID support to customers of his businesses while the City of Hamilton is not granting rent relief in the Market. All citizen members are volunteers. Albini owns a financial services business which is completely separate from his volunteering on the Market Board.

Council opposed the rent relief with only Councillor Esther Pauls supporting the market. Albini noted this fact to Chiarelli, who continued his belligerent behaviour.

The talking over each other continued, with members accusing other members of being out of order. Not unusual for the Market Board.

Finally, a member requested the City’s managing director for the Market, Cyrus Tehrani of the City Manager’s Office, to determine if the motion was in order.

The following is the full statement delivered by Tehrani:

“I think if it’s a bylaw change that is being put forward. There are policies in the bylaws. My understanding is when this was set up five years ago, there was a group of people that came together to put these together again, it predates me.

I believe, probably there is wording around term limits, regardless of the nature of the entity itself. So, the motion that’s being put forward is reading as a request to amend the bylaw.

And I think, from the vendor perspective as well, the right to self-govern. There is a process by which this bylaw itself, or the proposed change to the bylaw, I’m hearing verbiage around, you know, the ability for the vendors to select their own representation, I guess where I’m unclear on is with the current process that was carried out last time, when Anne [Miller] was elected that same process has been mimicked this time with the nominations being brought forward and being advertised in the newsletter and etc, etc.

So, if you go off the letters of the bylaw, an amendment to the bylaw does require that two thirds change for them to be taken forward to the sole voting shareholder.”

Jepson then announced his resignation, saying he backed Coleman “100 percent”.

Quickly, Bowen announced the meeting would continue with her assuming the chair upon Coleman’s resignation.

Coleman declared the vendors will no longer work with the Board and they were leaving.

Cyrus Tehrani refuses to stream board meetings to the public. Tehrani has not released the recording of the meeting.

The Public Record filed complaints to the Office of the Ontario Ombudsman regarding Tehrani’s violation of Municipal Act open meeting requirements. An investigation by the Ombudsman of the closed meeting complaint is ongoing.

Additionally, TPR will file a freedom of information demand for the meeting video when City Hall reopens.

One thought on “Hamilton Farmers Market Board Blows Up in Dysfunction, with Vendor Reps Storming Out”