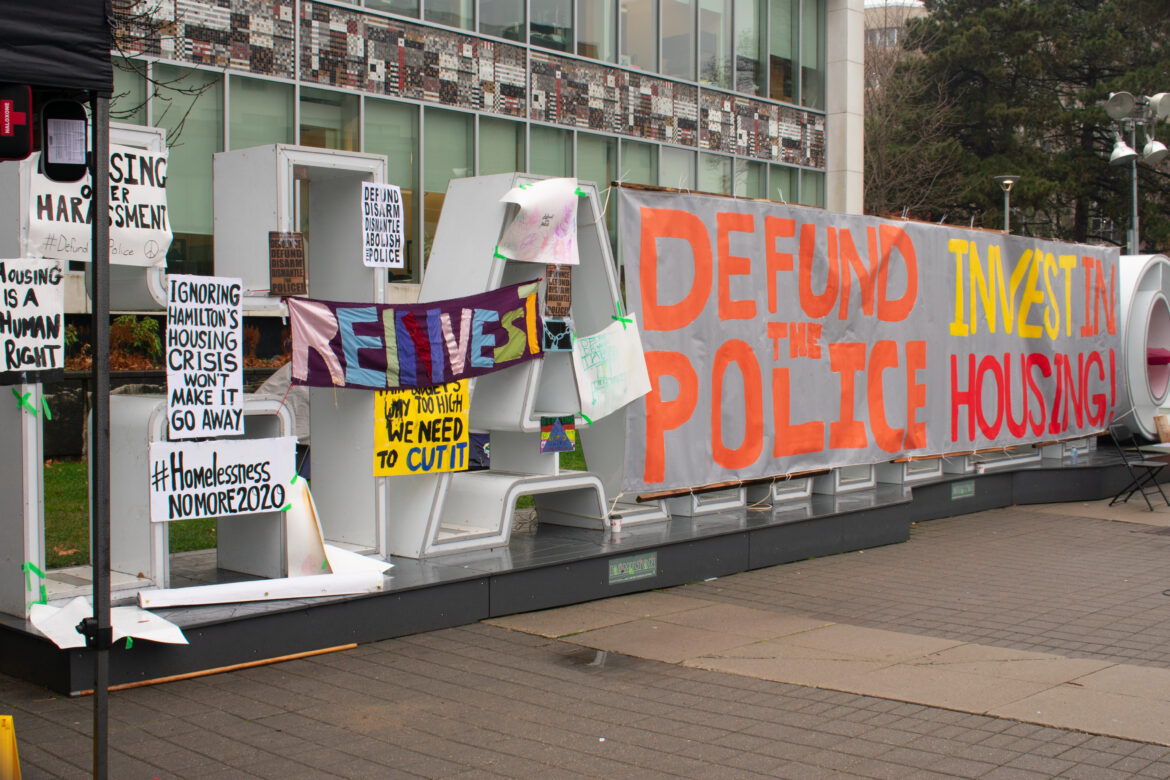 The HAMILTON sign covered with protest messages during a Defund Police protest at Hamilton City Hall on November 26, 2020

Hamilton Police and the City of Hamilton’s municipal bylaw enforcement acted against one of the organizers of a Defund Police protest in front of City Hall Monday, the first day of the ongoing protest.
Sarah Jama is charged with “Fail to comply with a continued section 7.0.2 order as per Ontario Regulation 364/20, of the Reopening Ontario Act, 2020, section 10.1(1)” which carries a minimum fine of $10,000.
Jama is expected to challenge the ticket, and this case contains all the necessary elements for the Courts to give us an answer on where the line between health orders during a pandemic and the Charter of Rights and Freedom’s fundamental guarantees is drawn.
The question to be answered by the courts? Can the government impose a public health limit on the number of people involved in an outdoor protest which follows all other public health regulations?
For the past eight months, there have been various large protests. At the same time, there are pandemic laws which restrict the size of gatherings. This is a case of competing interests and rights.
At some point, these competing interests will be litigated.
For those who are concerned about the infringement of political speech by COVID regulations, today’s arrest provides a strong case to pursue to seek a ruling favourable to their interests.
The litigant, Sarah Jama, is sophisticated and took many public health precautions in organizing the event. The speech is clearly a matter of public interest, and her sincerity in the expression of her beliefs is impeccable.
Before we continue, it must be noted that Hamilton authorities are citing the incorrect Ontario Regulation for laying the charge.

Ontario Regulation 364/20 are the Stage 3 rules, which permit gatherings of up to 100 people outdoors for a meeting or event. (A protest is an organized event, and arguably a meeting as well).  Hamilton Police state “during the course of the day, the number of participants in attendance ranged between 80-100 people in the forecourt at City Hall”, thus the gathering did not violate the limits of Reg 364/20.
Ontario Regulation 263/20 is the Stage 2 rules which apply to Hamilton. [Ontario Regulation 363/20 states which COVID state a region is in based upon its health unit]
The limit set in O Reg 263/20 for outdoor gatherings is 25 people.
There are numerous options for City Hall to correct the provincial offences ticket, and they can issue a new charge citing the proper regulation.

The Charter of Rights and Freedoms guarantees freedom of expression (Section 2(b)) “subject only to such reasonable limits prescribed by law as can be demonstrably justified in a free and democratic society” (Section 1).
The test used by the Courts is referred to as The Oakes Test. The burden is upon the state (in this case the City of Hamilton and the Province of Ontario) to prove that the limitations serve a ‘pressing and substantial objective’ with ‘minimal impairment’ to rights. The impairment must be tied to the objective.
Where is the line of impairment for public health objectives? This is the question which the judiciary will have to answer when Jama argues against the ticket.
The burden is upon the City and Province to prove the necessity of prohibit the kind of protest Jama led.
Both sides will submit evidence to advance their arguments.

There is not yet any Ontario decisions challenging tickets issued which I could find in CanLII’s database.
The large protests in the United States following the death of George Floyd, who was killed by Minneapolis police officer Derek Chauvin on May 25, have been studied by academics trying to determine if they contributed to increases in COVID-19 in the weeks which followed.
Due to the complexities of how the virus spreads, poor contact tracing, and numerous other factors; there is not yet conclusive literature regarding the spread of COVID (or lack thereof) during protests.
Many medical professionals, and some Ontario Medical Officers of Health, stated support for protests which took public health precautions during the anti-racism protests in late May and June in Canada.
At the time, Hamilton’s Medical Officer of Health Dr. Elisabeth Richardson stated that her medical advice remained the same, people should not have gatherings, that the advice was difficult, nonetheless, that was her medical advice.
Monday’s event at Hamilton City Hall was physically distanced, with face masks, and other COVID precautions.
The COVID public health violation is the number of people who gathered, greater than 25.

The Canadian Civil Liberties Association has repeatedly expressed concern about government using COVID regulations to preclude public dissent.
Court rulings are precedent, and consistency in decision-making is valued by judges. A group such as the CCLA is very careful to avoid advancing a bad case in front of the courts as the “test case” – the first litigation involving a law.
This case has many of the elements of a good case. As noted earlier, Jama is sophisticated and took all public health advice in organizing the protest. The protest is clearly on a matter of public interest.
This makes it a greater burden for the state (in this case the City and the Province if it intervenes) to prove that the impairment of the Charter Right to protest in this instance is minimal to achieve the objective of preventing the spread of COVID.
The fine of $10000 is substantial, especially for someone of modest or lower income as is common for younger people, especially those with mobility impairment such as Jama.
An additional bonus for those who wish to argue against the fine is that the City of Hamilton has a terrible track record of obeying the requirements of the Charter, and a lack of attention to details that matter in legal proceedings. (As evidenced in this case by citing an incorrect regulation)

2 thoughts on “Protest, Police, Pandemic, and Rights: Why the City Fining Sarah Jama Makes for a Charter Test Case”