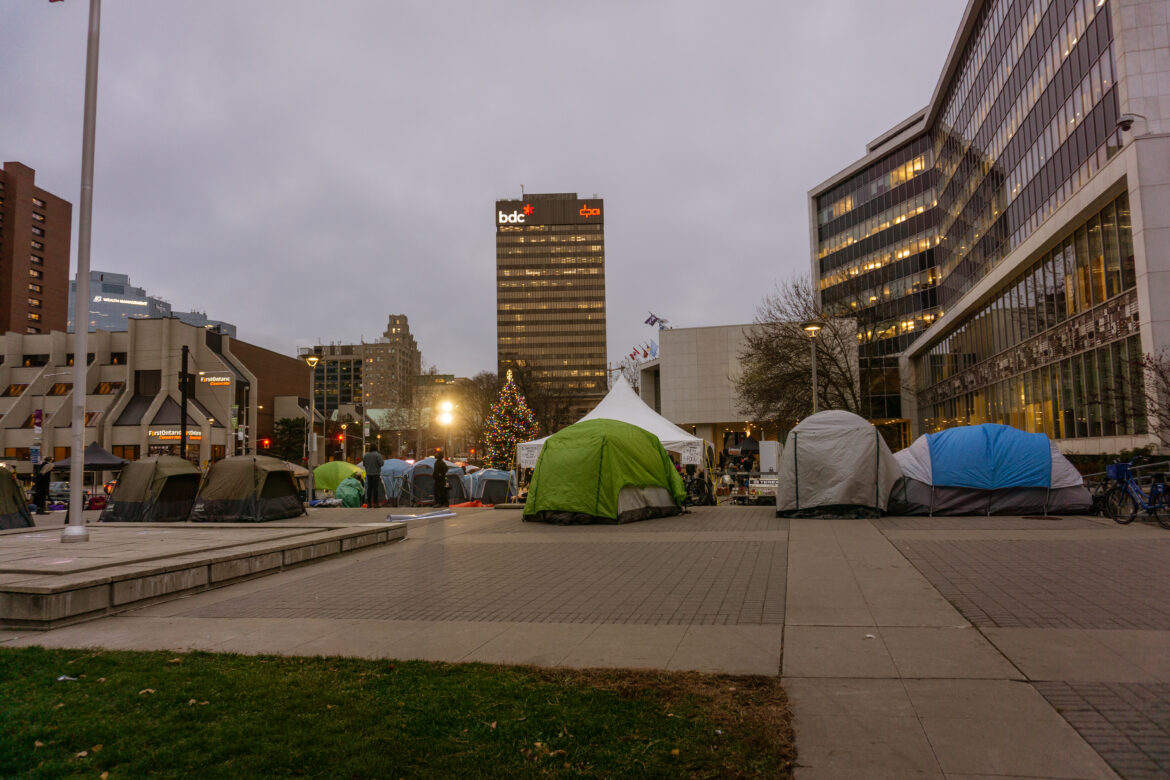 A protest camp in favour of defunding police in front of Hamilton City Hall on November 24, 2020

Hamilton’s movement to defund police are camped in front of City Hall on the forecourt. It is a well organized camp, with provisions and sanitation.
The protesters state they will remain until encamped until “money is divested from municipal, provincial, and federal police, and invested into free permanent housing“.
The City of Hamilton is seeking the removal of the protest camp.
During the City Council meeting on Wednesday, Hamilton City Manager Janette Smith stated additional tickets and charges have been issued for the ongoing protest which includes people camping overnights in tents. The City states it is considering further charges.
On Monday, one of the protest organizers was charged under Ontario’s emergency COVID regulations.
I wrote why the charge against Sarah Jama is a good test case for determining the balance between the right to protest and the government’s ability to enact regulations to prevent the potential spread of COVID-19: Protest, Police, Pandemic, and Rights: Why the City Fining Sarah Jama Makes for an Interesting Court Case.
The ongoing protest camp raise different considerations, and the legal distinctions between a short protest and protest camp are significant. Hence each is a separate article.

Protest Camps and The Charter

Case law regarding protest camps is that government can remove protest camps. Generally speaking, governments quickly issue ticket and then wait to take the enforcement action of removal.
The most instructive case is a 1994 Federal Court of Appeal decision Weisfeld v. Canada, (1994), 171 N.R. 28 (FCA).
This case involved a peace camp on Parliament Hill in Ottawa in protest of cruise missile testing. The protest began in 1983 and lasted until April 1985 when the Federal Cabinet ordered the removal of the camp. The group attempted to form a new camp in the fall of 1988, which started the litigation.
The Federal Court of Appeal held that while the protest camp was protected expression as per Section 2(b) of the Charter, the actions of removing the camp were justifiable under Section 1 of the Charter.
For the purposes of this article, I’ll use Batty v. Toronto (City) 2011 ONSC 6862 as the example case as it is an Ontario application of the case law involving protest camps and more recent. This involved a Occupy protest camp at St. James Park in downtown Toronto. The camp was removed by the City of Toronto under the Trespass to Property Act and the Toronto’s Parks By-law.
The Canadian Civil Liberties Association intervened as a friend of the court.
The case is instructive, as the City of Hamilton is following similar processes in responding to the protest camp.
In Batty, Superior Court Justice David M. Brown (as he was then) wrote:
“The Charter does not permit the Protesters to take over public space without asking, exclude the rest of the public from enjoying their traditional use of that space and then contend that they are under no obligation to leave. By taking that position and by occupying the Park, the Protesters are breaking the law. Such civil disobedience attracts consequences. In this case, the civic authority which represents the Toronto community now seeks to enforce the law  …  I conclude that the Trespass Notice is constitutionally valid. The City may enforce it.”
In this case, the Court accepted the submission of the City of Toronto that “the number of people at the occupation site varies during the day: typically low in the early morning (20 or so), rising during the day to around 70, and occasionally up to larger crowds in the hundreds”.
The Court noted the organization of the Occupy camp, including provisions for health and safety. Nonetheless, Justice Brown upheld the City’s issue of trespass and allowed the City to remove the Occupy protest camp.

City Hall managers are advancing an argument that the protest camp is a risk to the heritage features of Hamilton City Hall. The building and forecourt are designated heritage features.
“There can be no question that the area in front of a Town Hall is a place where free expression not only has traditionally occurred, but can be expected to occur in a free and democratic society. The literal town square is paradigmatically the place for expression of public dissent”, wrote Ontario Court of Appeal Justice Bradley Miller in Bracken v. Fort Erie (Town), 2017 ONCA 668.
The heritage designation of the City Hall forecourt is a cultural one due to its historical significance to Hamilton’s as a place of civic gathering for celebrations, commemoration, and protest.
As for the City’s newfound concern for the heritage features of City Hall. In 2012, City Hall installed planters on this forecourt in violation of its heritage status. During the City Hall renovations in 2009/2010, City Council removed the heritage white Cherokee marble from the sides of the building and replaced with cement. The marble was sold at a discount, grind by the new owner, and now line a drainage ditch in Ancaster.
The heritage claims are without merit.

COVID changes everything, and that includes that a protest camp results in a different measure of the potential spread of COVID.
Thus balancing between the right of protest and public health measures will differ.
Camping also engages a different sections of Provincial pandemic bylaws.
Hamilton is subject to Ontario Regulation 263/20 as we are a “Red Zone” under the Province’s COVID-19 public health framework. “Social bubbles” no longer exist as an exemption to public health guidance to maintain physical separation.
While the protest camp is not a campground, it is worth noting that campgrounds “are closed to the public” unless they comply with conditions which the protest camp is not meeting. [Schedule 2 Section 27 O. Reg 263/20]
As a result of COVID, Hamilton’s Medicial Officer of Health can issue a Section 22 Order under the Health Protection and Promotion Act directing the protesters to disband their camp.
Considering that courts have consistently ruled that protest camps can be disbanded, a Court is likely to grant injunctions to enforce any public health orders issued against the protesters.

Performances and Entertainment During COVID

The protest camp includes sound amplification and video projection equipment use for performances and film screening.
The performances are a form of protest expression. Outside of COVID, they are clearly protected expression, with minimal restriction.
Ontario Regulation 263/20 prohibits outdoor performances except at a drive-in, and the key distinction of a drive-in is that households are contained within their vehicle.  Schedule 2 Section 18 of the regulations states “Each person in attendance at the drive-in cinema or the drive-in or drive-through concert … must remain within a motor vehicle designed to be closed to the elements”.
Similarly, Reg 263/20 prohibits outdoor film screenings.