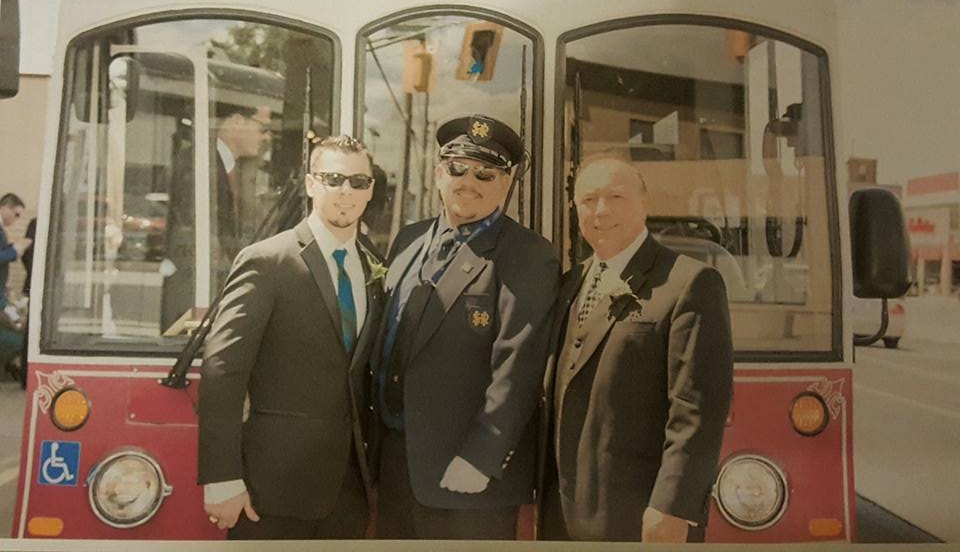 Editors note: this was originally published on my personal blog. It is republished on The Public Record – Joe Rouleau was actively engaged at City Hall and regularly attended Council meetings. His engagement at City Hall, and beyond, will be sadly missed.

Opening the bus doors and shouting a loud “Hey Joe!”, that’s how Joe Rouleau would greet me as I walked by his Delaware bus at Main and MacNab.

His unique accent, and friendly manner distinctive as anyone could be.

His vehicle was struck on Upper James shortly before midnight. He had just ended his shift, and was driving home to his wife and their one year old son Joseph.

The tragic news spread today among HSR operators, a sense of shock was evident. You could see it in the entire organization.

Joe was known by everyone.

He was very active in the Amalgamated Transit Union 107’s political action committee, attended company events, marched in the Labour Day parade, and regularly engaged in conversations Downtown between his split shifts.

Joe was a regular at City Hall, sitting in the gallery during meetings. Honestly, it’s hard to think of a week that went by that I didn’t see him.

Our last conversation, only a few weeks ago, was about his desire to get more involved in Hamilton. He had an thoughtful opinion on most things, and could talk my ear off. He was regularly questioning me on documents. He seemingly read every Council agenda cover-to-cover, I knew one day, he would run for City Council, it was clear he had the passion for it, and that he wanted to serve the public more.

This morning, I saw HSR Director Debbie Dalle Vedove at City Hall shortly after she learned that Joe had died. She was clearly shaken by the news. Dalle Vedove and I were meeting at 9:30am, she did tell me she may have to step out, that the collision the night before had taken the life of a HSR operator. She knew the operator.

The HSR is a large organization, there are over 700 employees, this is how much bigger than life Joe was, everyone knew him.

Later in the day, at the MacNab Terminal, a HSR operator says: “One moment you’re waving goodbye to your buds at work, and then the next your vehicle is struck a block away. Life is so fragile, so short”.

I listen, then he shows me the photo. I’m stunned, shocked. I’ll never hear that distinctive greeting again, never win the argument of trying to get him to call me Joey.

It’s a bigger loss, we’ll never see Joe get more involved in our community, his contributions had only begun.

Today I was devastated at the news of Brother Joe Rouleau’s passing in a horrific automobile accident on his way home from work. Brother Rouleau is survived by his wife Megan and 1 year old son Joseph. Our thoughts and prayers go out to them. Joe was such a key member of our ATU family and such a special friend to so many of us his passing leaves a great empty void in our hearts. Now we must be there to support his wife Megan and son in whatever way we can. May you Rest in peace my brother your strength and conviction lives on in Solidarity.

Funeral arrangements for Joe have been announced with visitation on Monday, September 4, and funeral the next day. Details here.

ATU 107 has created a memorial fund to support Joe’s family, you can contribute on GoFundMe here: https://www.gofundme.com/4cxxe3s