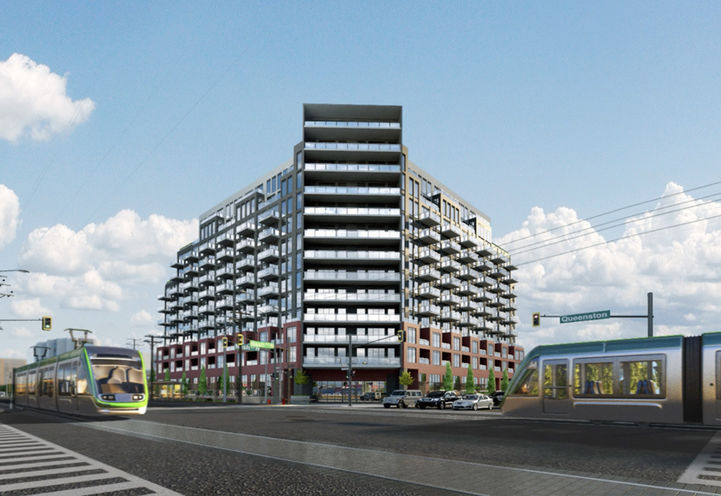 Ward 5 Councillor Matt Francis is supporting a proposed sixteen-storey 316-unit proposal on the northwest corner at Nash and Queenston.

Last week, staff came forth to Council to state they cannot support the current proposal because it is double the permitted eight storeys for the site in the Centennial Neighbourhood Secondary Plan.

The proposal does not meet the stepbacks required by the City-Wide Corridor Planning Principles and Design Guidelines and “encroachments into the angular plane above the seventh storey.”

The Ontario Land Tribunal will make the decision. The developer, LJM, filed a non-decision appeal 205 days after they filed their application.

Council had a 120-day deadline to make a decision.

Francis’ comments at Council Planning Committee were concise, which is proving to be his style during meetings.

There was no political hedging, no weasel words.

With the ward councillor in favour of the height and density, what remains is negotiating water and sewage services.

I spoke with Francis after Wednesday’s Council meeting to learn more about his land-use planning philosophy.

But first, let’s go back to his election statements.

Here is a selection of his statements during his The 155 Election Podcast interview:

“I’ve seen a troubling trend of over intensification, traffic and parking concerns that are coming forward from residents. Because of this over-intensification and over-development, people are seeing a drastic change in the way that their established communities function. And it’s troubling to me I know we’ve got growth is inevitable, but that has got to be done in the right places and not at the expense of our residents.”

“I want to keep taxes low and not overdevelop our city.”

“I will never support proposals that negatively impact our residents and their property values. Growth is inevitable, but it must be done in the right places, and our major transit corridors should be the first place we start. Before we even consider changing the way our established neighbourhoods.”

Why He Supports 16 Storeys at Nash and Queenston

Francis says he supports this proposal because sixteen storeys is appropriate for the site because of the planned LRT and that it is not over-development.

He says it is “a lot more palatable for the community” than the forty-two storeys proposed at Eastgate Square 500 metres to the east on Queenston Road.

“I’m trying to make the example that eight to sixteen is much more appropriate than twenty to forty-two,” he says.

Does Not Support Two Tall Buildings at King and Centennial

Francis does not support a proposal for two tall buildings at 2900 King Street East. This site is on the south-west corner at Centennial Parkway.

“Unless there’s some sort of solution that I’m unaware of, there’s no way that one’s going to be very problematic.”

Asked about his present position regarding the proposed redevelopment of Eastgate Square, Francis stated:

“There’s a lot more discussions that need to be had with the community. I do think the community spoke very loud and clear during the election. That the current proposal is way far out of line with what’s acceptable for that intersection and for those for that community.”

Francis’ statement on the LJM Nash Road project does not, on its own, create a precedent.

Precedent requires a Council vote to adopt the position when the City’s planning lawyers go in front of the Ontario Land Tribunal for a settlement hearing.

It signals to the landowners of the large commercial sites between the Red Hill Parkway and Eastgate Square that the ward councillor is willing to support mid-rise development.

This is the stretch of the B-Line LRT with the greatest uplift potential. It is important to Hamilton’s economic and housing goals to see it redeveloped into mixed-use higher density uses.

The Eastgate proposal can be argued at the Ontario Land Tribunal with its current proposed height and density.

We’ll have to watch and see what happens.

The Nash and Queenston appeal remains at the Ontario Land Tribunal.

Notice of first pre-hearing has not yet been issued.

One thought on “Ward 5 Clr Matt Francis on Planning: What He Supports What He Does Not”