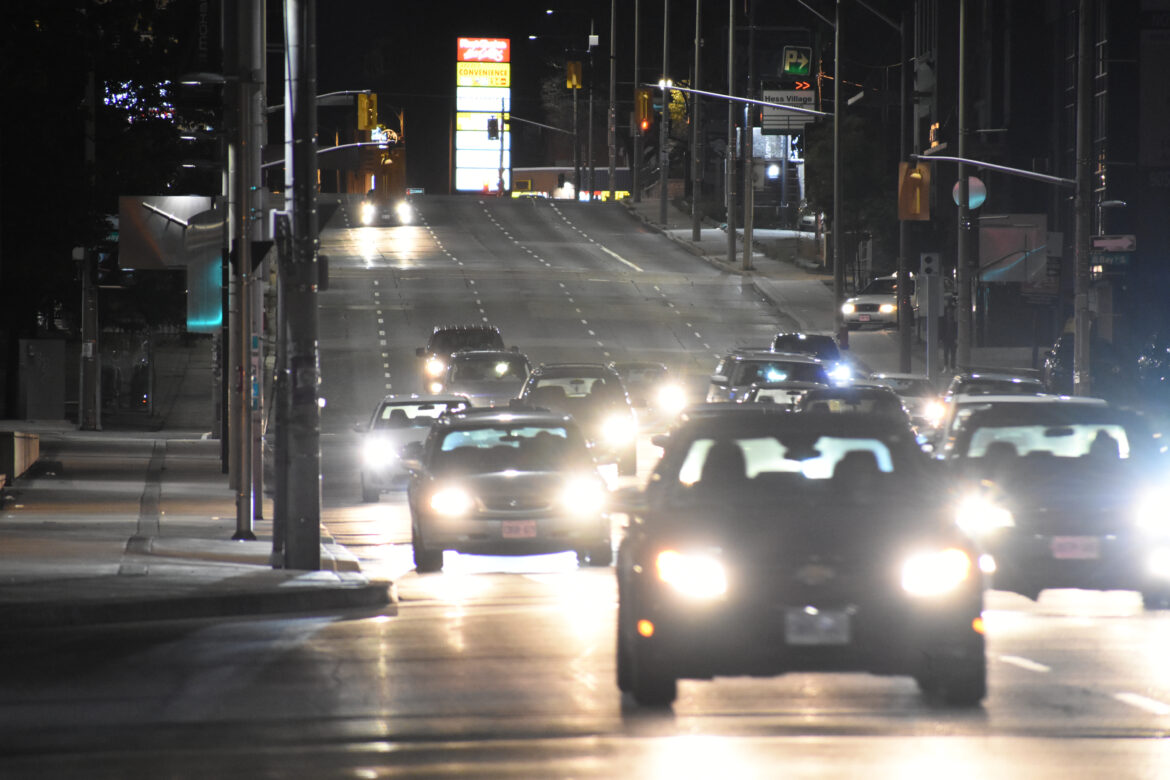 The changes follow a May 11, 2022 vote at City Council directing staff to act immediately to decrease the number of pedestrian deaths and fatalities along both King and Main Streets.

Hamilton recorded its 14th road fatality thus far in 2022 earlier on Tuesday, a few hours before the City released this report. 11 of the 14 fatalities involved pedestrians. 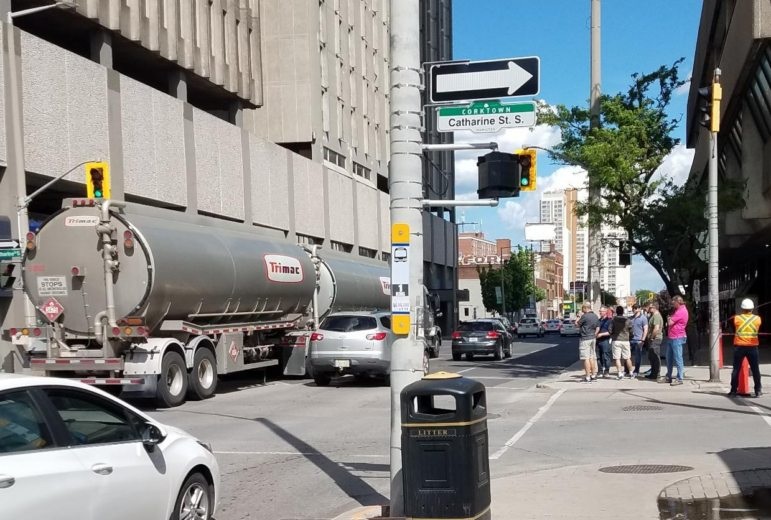 The City’s own speed data includes that speeding is the norm along Main Street. The City recorded average speed data which found cars at the 85th Percentile Speed exceeding the posted speed limits.

Along Main Street, the 85th percentile speeds recorded were:

The posted speed limit along Main Street is 50 km/h.

Soldo writes the City will repaint lane markers along Main Street between Dundurn Street and Sherman Avenue to be four lanes from the existing five lanes.

“This measure will help reduce the number of side swipe collisions throughout the corridor due to substandard lane widths and provide a pedestrian buffer adjacent to the south side sidewalk,” Soldo writes.

The repainting is “scheduled to be completed by the end of August.” 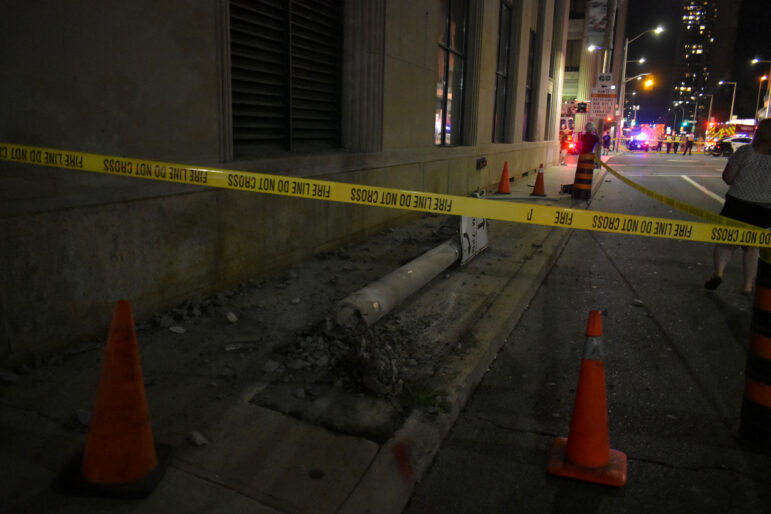 Restricting Right Turns on Red Along Main, But Not at the Busiest Most Dangerous Intersections

The City plans to prohibit right turns on red at all intersections along Main Street between Dundurn Street and Gage Avenue with the exception of four.

Public Works staff’s report states this pedestrian safety enhancement will cause queuing delays for public transit at the intersections of James Street, John Street, and Wellington Street. This is the reason staff will not implement turn restrictions at these intersections.

The intersection of Main Street and John Street is Hamilton’s most dangerous according to the City’s own annual collision statistics.

The annual collision report states “the intersection of John Street South and Main Street East experienced the highest number of fatal and injury collisions [across Hamilton] from 2017–2021 (28). Of the 28 collisions, none were fatal.”

Due to the frequency of collisions at the intersection, the City stopped replacing collision bollards there.

The intersection of Wellington Street and Main Street is Hamilton’s second most frequent location for collisions, with a five-year average of 26 collisions between 2017 and 2021.

“This will make the pedestrian crossings safer as drivers will not be blocking crosswalks due to limited sight lines at many of the intersections,” Soldo writes as the reason for implementing no right turns.

Soldo’s report to Council does not include any statement regarding restricting left turns on red between one-way streets.

Soldo’s report states he will be recommending restricting right turns on red along King Street with the “exception” of “intersections with transit stop locations”. The King Street changes will be made public in August.

The City will implement leading pedestrian intervals “at all the signalized intersections along the Main and King Street corridor.”

This will allow pedestrians to begin crossing intersections before vehicles get a green signal.

The City of Toronto states this “is particularly helpful for older pedestrians, as they may take longer to occupy the crosswalk following the start of a “walk” indication, making them less obvious to turning motorists.”

Soldo’s report states the City will be adding “temporary bump outs in order to provide protection for parking along the north side of Main Street and shorten the crossing distances across intersections for pedestrians.” The locations of bump-outs are not listed in the report. 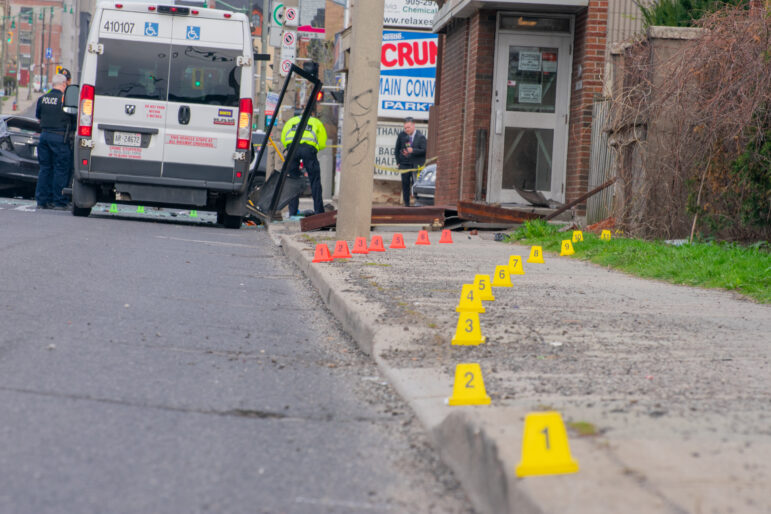 Police reconstruct the path of a speeding vehicle which mounted the sidewalk along Main Street West resulting in the death of a DARTS operator who was standing on the sidewalk beside her vehicle.

Paid parking metres will be removed “outside of the downtown core” to encourage vehicles to park along Main Street. There will be a two-hour time limit during daytime hours.  Overnight parking will be permitted.

To improve pedestrian safety for people crossing to and from City Hall, the City will “add additional 2 hour paid parking near City Hall on the north side.”

As well, paid parking will be added on both sides of Main Street between Gage Avenue and The Delta intersection where King Street and Main Street cross.

Soldo writes the City will make the pedestrian crossing in front of City Hall a “pedestrian scramble.” Soldo does not explain how a pedestrian light can be a scramble intersection. Summer’s Lane, the driveway in front of the Convention Centre, only permits one way of traffic northbound towards King Street. Cars cannot enter Main Street from Summers Lane.

Pedestrian scrambles are most easily described as four-way intersections where all vehicle traffic is stopped to allow pedestrians to cross in all directions, including diagonally.

The intersection of Yonge Street and Dundas Street is a proper scramble crossing.

Soldo writes he will present ASE options to Council on August 10, 2022.

The report can be read here.