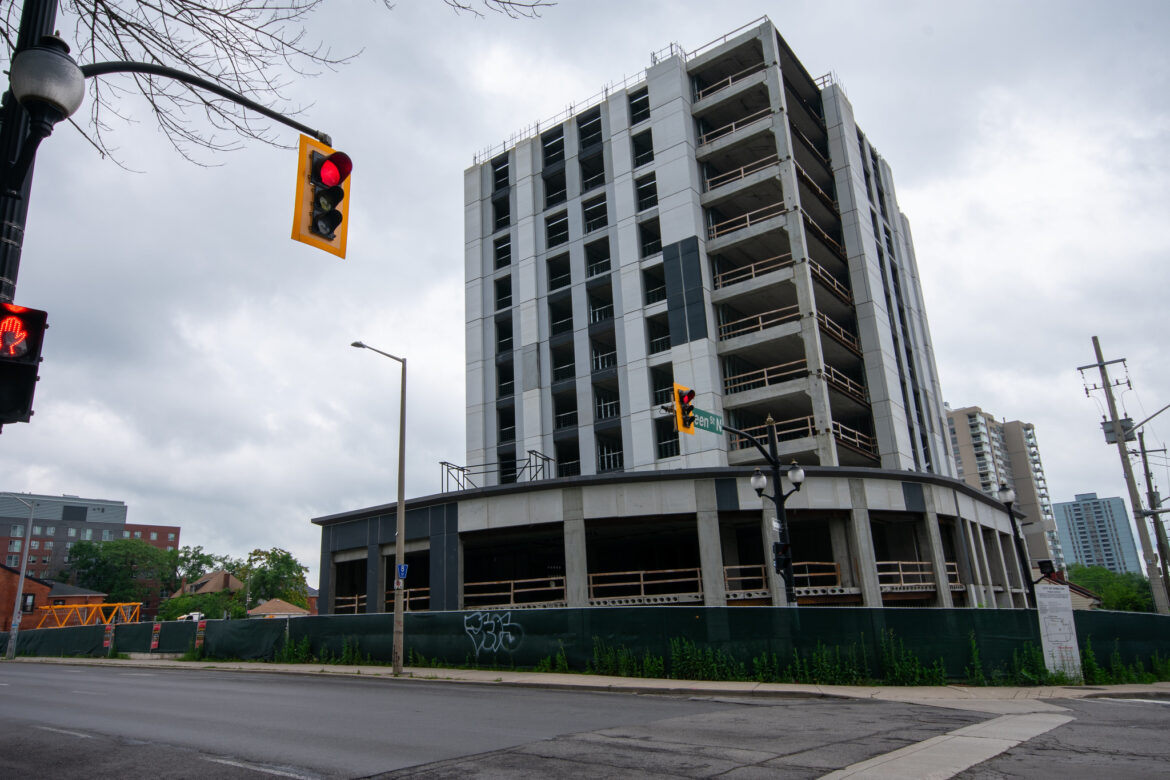 The City of Hamilton and Vrancor developments agreed to a settlement allowing a 25-storey tall building on the northwest corner of the intersection of King Street West and Queen Street. The property is within the Strathcona neighbourhood, but across the street from the Downtown Secondary Plan zone and at a planning Light Rail Transit system.

Council approved the settlement in closed session on May 25, 2022. Ward 1 Councillor Maureen Wilson was the only councillor to vote against the settlement.

The deal allows Vrancor, the property company of Darko Vranich, to construct a 25-storey tower on the northwest corner of Queen Street North and King Street West. The revised building will comply with the City’s tall building guidelines.

During the Ontario Land Tribunal settlement approval hearing last Monday, the City’s planner on the file stated the changes represent good planning because of the location of the tall building being on a primary corridor beside the planned Queen Street B-Line LRT stop.

The City’s position is that the tower would be approved by the OLT and the settlement now represents good planning.

Since that time, the Provincial Growth Plan has changed to require significant intensification in Major Transit Station Areas, which are the areas within 500 to 800 metres of LRT stations.

The primary change is the creation of a six-storey podium below the tower, with the tower now including some step back in conformity with the City’s tall building guidelines.

The agreement states the podium shall be cladded with materials complementary to the historic Scottish Rite across King Street, have recessed balconies to decrease overlook of neighbouring houses, and no more than 60% glazing for energy efficiency.

Local neighbours in the Strathcona community, who organized against the proposal as the Strathcona Shadow Dwellers, state the settlement failed to protect their neighbourhood and the concessions from the developer are “all table stakes and hardly tough concessions on the part of Vrancor.”

Spokesperson Wayne MacPhail states the concessions are all items that should’ve been expected of the developer in an initial submission.

MacPhail distributed a document comparing the City’s expert witness statements of May 6, when the City was opposing the development, to their statements on May 27, after the City agreed to the settlement.

On May 6, the City’s expert stated “It is my opinion that in the above noted considerations, scale and massing should be given a greater weight than the other elements, as a reduction in scale and height would have a much more substantial impact on reducing the impacts on adjacent uses than providing landscaping, trees and fencing (particularly on the Subject Proposal). While useful, these considerations should not be considered as an alternative to a meaningful reduction in the building scale and massing.”

On May 27, the opinion changed to “It is our opinion that the revised design:
Provides reasonable regard for the intent of the UHOP and Strathcona Secondary Plan
policies, as well as the relevant urban design guidelines, subject to a future site plan application.”

Vrancor has applied for a zoning bylaw amendment and official plan amendment for their property one block north of this site.

The proposal for 200 Market Street is “To rezone to permit a mixed-use development comprised of two 15-storey towers and two 27-storey towers above a 3 to 7-storey base building (82m max height). Includes a total of 762 dwelling units, 1,003 m2 of commercial space and 369 parking spaces.”

The Market Street plan was submitted to the City on January 19, 2022.