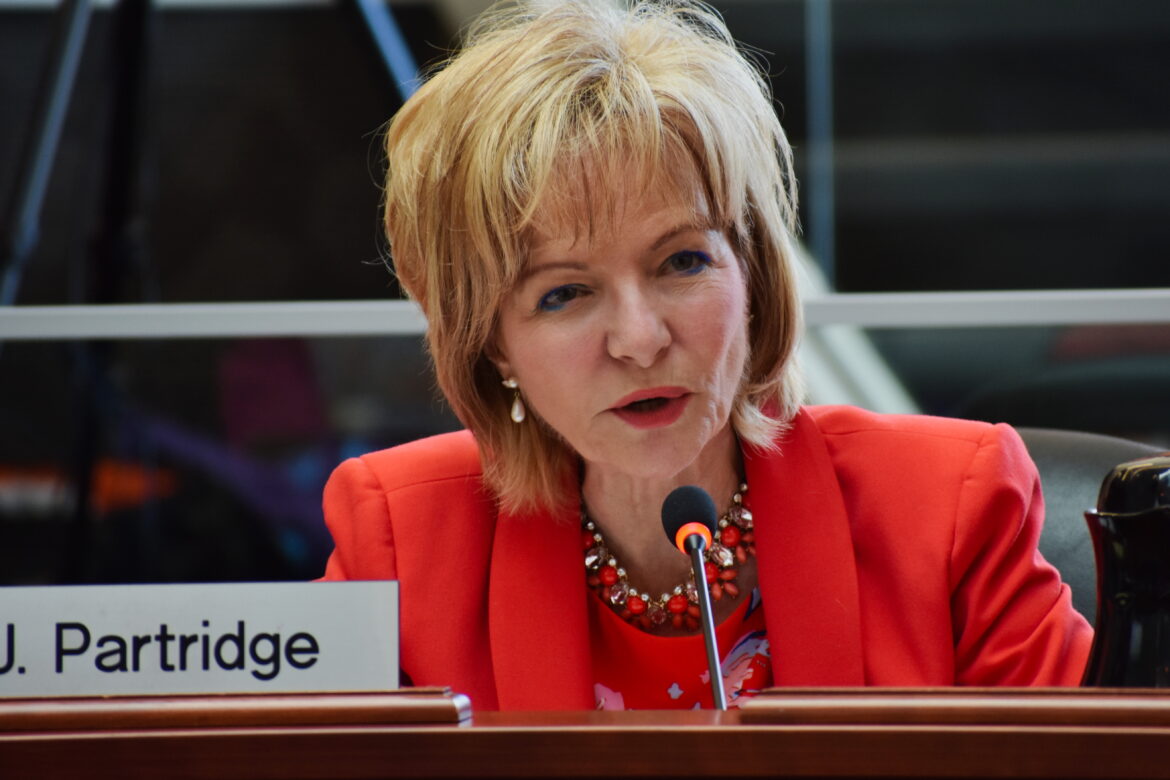 Ward 15 Councillor Judi Partridge announced today that she is not seeking re-election.

“I’ve decided I am not going to run. I’ve served three terms. It’s 12 years,” Partridge stated to CHCH reporter Sean Cowan. “In my first term, I said that I believed in term limits, and I still believe in term limits.” [Watch the full remarks at approximately 23:00 in the full interview posted by Cowan.]

Among the achievements Partridge lists are new businesses in the Flamborough Business Park, improvements to public parks, road upgrades, and new municipal community facilities including new library branches in Waterdown and Carlisle.

Partridge was first elected in 2010. The incumbent, Margaret McCarthy, did not run for re-election. Partridge ran in 2006, in what was a two-person race.

The Ontario Municipal Act [Section 275] restricts outgoing municipal councils from making major decisions if less than three-quarters of incumbent councillors are seeking re-election or not re-elected.

In Hamilton, this means that if 11 or fewer incumbent members of Council are running for re-election, Hamilton City Council becomes lame-duck.

Ward 4 Councillor Sam Merulla and Ward 11 Councillor Brenda Johnson have announced they do not plan to seek re-election. Ward 5 Councillor Russ Powers, who was appointed by Council after Chad Collins was elected a Member of Parliament, pledged to not run for the elected.

If these four do not register, and at least one more member of City Council joins them in not seeking re-election, Council becomes restricted “Lame Duck” at the close of municipal election nominations on August 19 at 2:00 pm.

Impacts of a Lame Duck Period at City Hall

During the restricted period between August 19 and the beginning of the new Council term on November 15, the outgoing council is prohibited from passing any bylaw that allocates spending more than $50,000 or creates a liability for the municipal corporation greater than $50,000.

Spending authorities delegated to staff remain in place. The City Manager can spend up to $250,000 per item during the restricted period.

Developers can appeal to the Ontario Land Tribunal for non-decision, and lame-duck periods still count against the deadline for municipal councils to make a decision despite Council being prohibited from deciding.

This means some projects without deadlines, such as the ongoing comprehensive residential zoning review, will be delayed.

This is not to be confused with the Urban Boundary Expansion review, which planning staff will be present at a special council meeting during the first half of May.

The comprehensive review is a long-term project which began before the boundary review. While related, it is separate.

Because a lame-duck period does not pause decision timelines under the Building Code and Planning Act, the outgoing Council will still need to meet.

If only to discourage developers from applying for things such as demolition permits for buildings of heritage interest or listed on the municipal heritage registry.

[Wilson-Blanchard filed for demolition periods during the 2012 Council Christmas break in an attempt for the Gore buildings, WB backed down under public pressure]

In 2010, then Ward 15 Councillor Margaret McCarthy stopped attending council and committee meetings. It created challenges for the Council as a whole in reaching the 50 percent plus one threshold for quorum. There are no indicators Partridge will act in a similar matter.