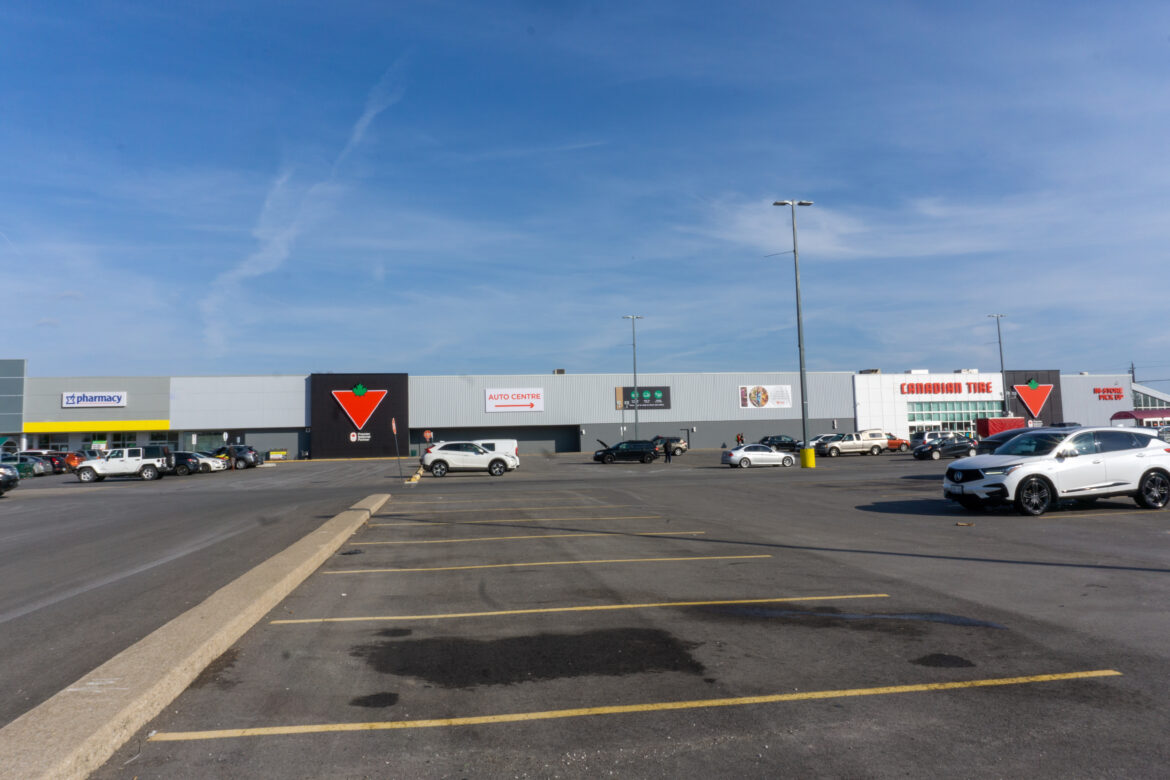 The Canadian Tire at 777 Upper James, its landscaping was a detail of the CMZ Settlement Agreement

The two large real estate holding companies and the City of Hamilton agreed to a series of site-specific amendments for properties owned by the companies, clarification on language in the city-wide C3 zoning, and allowing a much wider range of commercial uses at Clappison’s Corner in Waterdown.

Robichaud describes the outcome as positive for Hamilton, especially as it brings the CMZ, passed in November 2017, into force and effect across the City of Hamilton.

As part of the Minutes of Settlement, CTREL and Choice have agreed to withdraw their other appeals of the CMZ bylaw.

He says the settlement protects the public interest, especially “in light of the current climate at the OLT [Ontario Land Tribunal],” that favours landowners over municipalities.

Canadian Tire is one of the first businesses in Hamilton to add EV charging stations to their properties, Robichaud noted.

He states CTREL discussed more active transportation (cycling) connections as part of their planning during negotiations.

CTREL and Choice gained site-specific exemptions to allow them to build new one-storey buildings on their properties, count existing surplus parking spots towards parking requirements for new buildings, and expand existing buildings by up to 10 percent as of right.

Robichaud says this will enable them to continue reinvesting “until such time as the market conditions change to enable a fundamental rethinking of their sites” such as conversion into new residential communities.

Choice Properties is converting many of its strip plaza locations into mixed-use communities, such as 685 Warden in Scarborough. 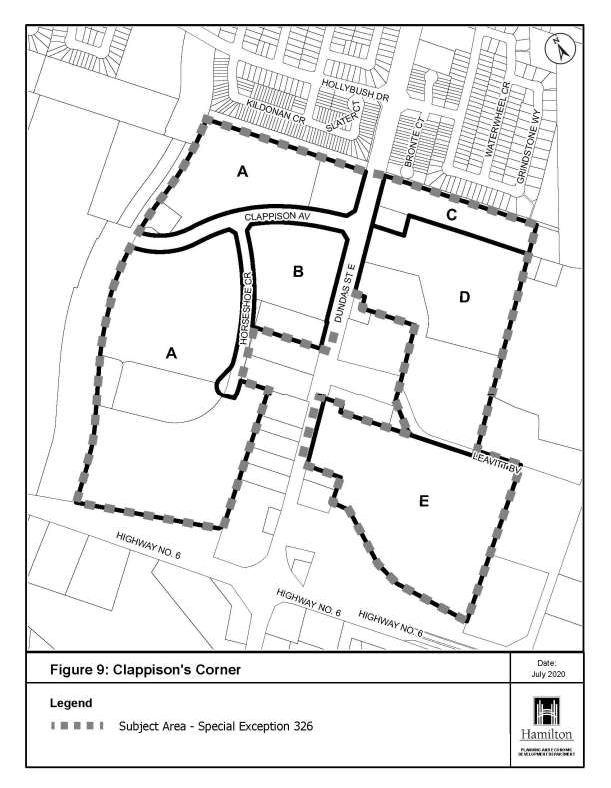 Map of the special schedule for Clappisons Corners in Waterdown

The commercial “power centres” on the east sides of Clappison’s Corner [Highway 5 and Highway 6] in Flamborough are now subject to a separate Schedule being added to the CMZ.

The area will be allowed a wider range of uses, with nearly all types of commercial services now permitted. A maximum of one self-storage facility is now a permitted use.

The new Waterdown Transportation Master Plan calls for Clappison’s Corner to become a pedestrian-friendly area to facilitate active transportation use.

A development proposal for the north-east and south-east corners of Clappison Corners plans to build mid-to-high density residential with a dense urban form. The proposal is at the Ontario Land Tribunal on appeal.

TPR asked Robichaud how self-storage, traditionally a suburban land use, fits into the mid-term vision for this area.

“People have too much stuff,” he says as people move into more intensified small living units, they need storage. Companies are now building five and six-storey storage facilities in urban areas. People commonly store bulkier items in these facilities, such as winter sports equipment.

[The City is already reviewing an application for a five-storey self-storage building in the rear of 1550 Upper James.]

Hamilton’s Commerical Mixed-Use Zoning was approved by Council in November 2017.

TPR asked Robichaud if he expects appeals of the City’s proposed new city-wide residential zoning bylaw, that will go to Council in either Fall of 2022 or Winter 2023, to require a similar length of time for the OLT appeals that will follow.

Robichaud states COVID cause a delay in negotiations between the City and both Choice and CTREL.

Delays resulted from both challenges conducting complex negotiations by electronic means, and uncertainty in the commercial real estate market following changes caused by the pandemic.

Robichaud says both Choice and CTREL discussed long-term visions to convert their Hamilton properties to mixed-use.

There remain some site-specific appeals of the CMZ which are being dealt with in separate hearings.