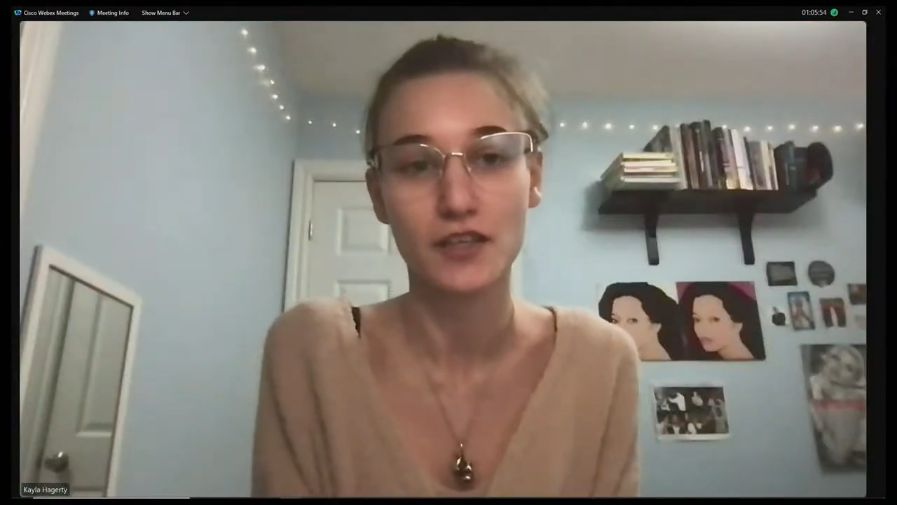 Kayla Hagerty delegating to Hamilton City Council's Board of Health meeting on March 21, 2022.

Kayla Hagerty is calling on Hamilton City Council to call for the decriminalization of simple drug possession as part of a broader strategy to end overdose deaths in Canada.

Hagarty, a Hamilton resident who is completing a Masters’ degree in sociology at Carleton University, delegated to City Council’s Board of Health meeting on Monday.

“I’m here to represent over 24,000 Canadians that have lost their lives to opioid-related overdose deaths since January 2016,” she stated.

Following a deep breath, “One of which was my father, Ian Harrington, who passed away in May 2020. I’m sorry.”

Hagerty held back emotion as she spoke of her father’s death.

“I soon discovered through my research that my father’s death was not an isolated issue.”

“In fact, public health Ontario reported that within the first 15 weeks of the pandemic, Ontario experienced a 30 percent increase in opiate overdose deaths. The Government of Canada reported between April and June 2021 that there were approximately 19 opiate toxicity-related deaths a day.”

Hagerty is asking Hamilton’s Board of Health to endorse the work of the Canadian Drug Policy Coalition, seeking the decriminalization of drug use – addiction is not a criminal matter, and to adopt best practices to respond to the ongoing opioid epidemic in Hamilton.

Mayor Fred Eisenberger agrees, “the issue of decriminalization of simple possession, which I think is a very unique distinction, I think is an important step.”

“I would admit that we’re treading water on those issues,” adding the City is “very aggressively pursuing” adding more safe consumption sites.

Ward 3 Clr Nrinder Nann added that Council voted three years ago to ask Public Health staff to prepare a report on decriminalization. Like nearly all public health matters, it was put aside in March 2020 due to the COVID pandemic response.

Staff state it remains on their outstanding business list for a future report back.

Hagerty’s delegation begins at 20:30 in the meeting video.

Additional: Hagerty produced and directed a documentary, in honour of her father, entitled How the COVID-19 Pandemic Affected the Pre-existing Opioid Epidemic in Canada. It is available to view on YouTube.