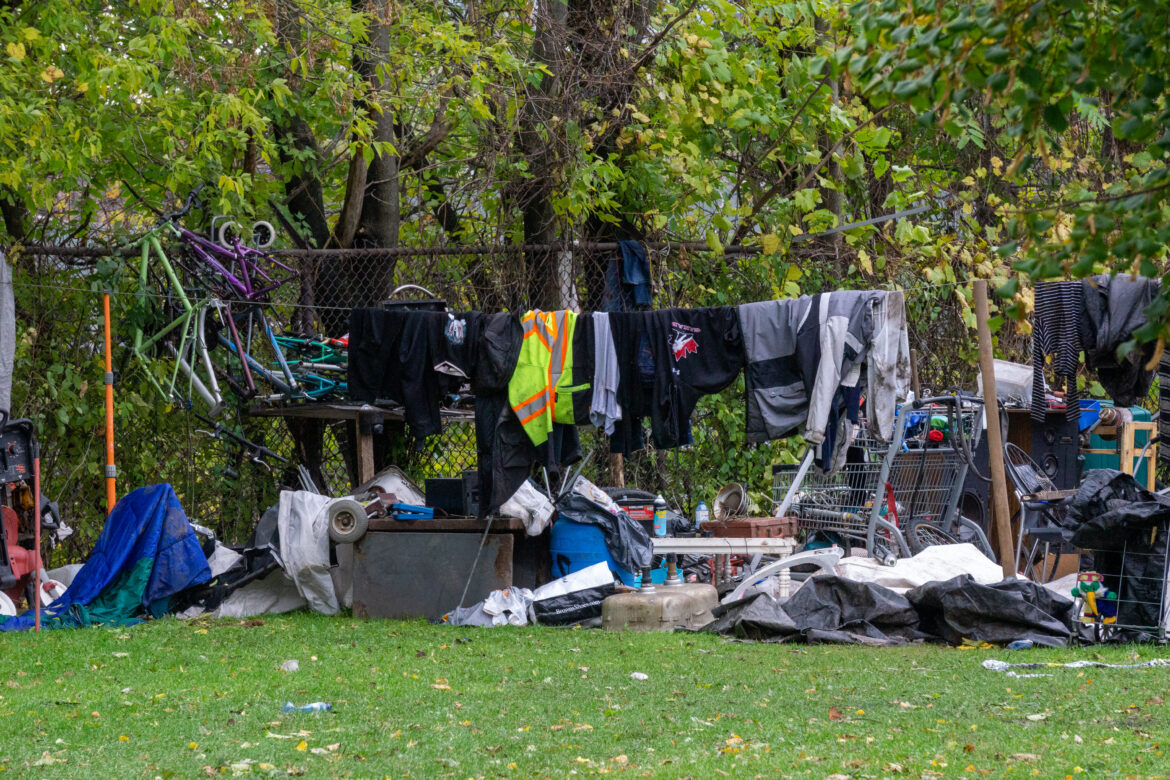 Ward 2 Clr Jason Farr wants the City’s staff and Hamilton Police to remove homeless encampments immediately upon the City learning about a new one, within 12 to 72 hours of the City becoming aware of an encampment.

On Tuesday, he succeeded in passing a motion that calls for enforcement seven days per week, including Sundays.

Hamilton’s Municipal Bylaw Enforcement Director, and the Director of Housing, both stated the new policy direction, if approved by Council, will result in city staff providing quicker notification to the Hamilton Police Service.

However, they stated the City cannot direct police enforcement operations and it does not guarantee police will increase the priority of support to city officials who clear encampments.

“I see there’s some 45 delegations requested,” Ferguson stated. “If they take five minutes each with a question that’s around four hours,” adding, many of “names look very familiar to me.”

Ferugson asked the meeting clerk to “make sure that we’re hearing something new as required under our rules of order, because four hours is a long time to sit here if we’re going to hear the same thing over again over and over again.”

As Chair of Planning Committee, Clr Brenda Johnson handled a few tense moments during the 37 delegations, including cutting microphones on occasion.

“Too many lives and all of our community relationships are at stake every single time the city commits, and recommits to violence instead of meaningful supports and investments,” delegate Vic Wojciechowska told councillors. “I’m running out of words to try and convince you into compassion into care into transformative policies that choose life for people.”

Members of the Hamilton Encampment Support Network, Wojciechowska among them, filmed their delegation videos at various locations where the City removed homeless individuals and encampments.

Other delegates state the City should not remove encampments until it provides safe housing and shelter options that fulfil people’s needs.

“There are variants of COVID-19 still around,” stated Jim Quinn. He said the City should stop “removing people from encampments and forcing them into shelters where they risk infection.”

Quinn added, “shelters do not allow houseless people to have pets and separating them from this support is harmful.”

“I know that there’s a camping bylaw, and that’s what we’re talking about. But I would argue that these people are not camping,” Quinn continued. “They’re trying to protect their lives … trying to avoid inclement weather. They’re living in small communities for friendship and safety. And they look out for each other in these settings.”

Delegate Wynne Baker directed a comment at Ward 2 Clr Jason Farr, stating, “Your willingness to advocate for your constituents is contingent on them having an address Councillor Farr.”

Chair Johnson intervened, “I’m sorry, I’m going to have to interrupt you, please. You speak through the chair. You don’t point out anyone, with all due respect.”

Farr called a point of order, “I would also argue vehemently that what has been just stated is completely inaccurate and the record …”

Johnson interjected at this point, stating, “Stop the argument. This is not a debate.”

Baker continued “I would like to remind the councillor that he works for us, we pay his wages and we vote him in and this is a performance review.”

Eventually, Farr called another point of order. Baker and Farr began to debate.

Johnson directed the Legislative Assistant running the video meeting to “cut their mics please.” The two were silenced.

Delegate Joanna Aitcheson stated, “these meetings are an example of a white supremacist ladder climbing and another kind of controlling of people and I’ve frankly had enough of it.”

Clrs John-Paul Danko and Johnson both object to being referred to as white supremacists.

Aitcheson responded, “not saying that as an individual, anyone here is a white supremacist, but the amount of fragility that it must take to hear that and to take that into your own personal as a personal attack speaks to the fact that work needs to be done here. ”

Delegate Sarah Imrisek displayed the photo of her ex-husband John, “he died homeless,” she stated to councillors.

“He was living and staying at a homeless shelter at the time of his death. And I put him up there to explain how I became educated about the problems that people face.”

“John was a renovation carpenter who became addicted to prescription oxycontin during the big oxy push,” she stated that once his Doctor began pulling back on his prescription, John began buying pills from “non-official health sources.”

This “escalated into a really bad addiction that I couldn’t continue to support him through.”

Imrisek described how the medical system failed him.

“He came from a good family, his father was a judge,” she continued, it “could have been any of us.”

“When people end up in encampments, it is because they do not have other choices.”

Imrisek asked councillors to “not to harass them and take their last belongings away.” She added, “trying to sweep it under the rug” is not a “real solution” to homelessness.

She stated John “was robbed multiple times in shelters. He had conflicts with the staff. There were a lot of reasons why that was not a very safe place for him.”

Other delegates described the unaffordability of housing in Hamilton, especially for those who rely upon Ontario Works and the Ontario Disability Assistance Program for their income.

Clr Farr began the Council debating saying his motion is necessary because he is hearing “ongoing concerns from residents and businesses” in Ward 2 asking “why encampments are growing? Why are they remaining entrenched?”.

“We cannot be the only city with an enforcement process that often results in encampments entrenched in parks, every competitive city I corresponded with, enforces their bylaw within a few days or sooner,” Farr stated.

He stated the previous encampment protocol, which Council ended during an emergency no-notice meeting on August 9, 2021, “was a disaster in many of my parks.”

The protocol limited where encampments were located, and capped the size of encampments at five tents.

Farr says Hamilton is doing more to assist homeless people than other cities.

“We are nationally recognized with our work on housing and homelessness,” Farr stated for “an effort unmatched anywhere else. Nobody went as long, nobody tried as hard, in no other community.”

Beginning his remarks, Clr Danko stated that he opposed ending the encampment protocol and appreciated the delegates genuinely care about those experiencing homelessness.

Danko said he “heard a lot of what I feel are really unfair characterizations of both the Ward Councillor and Council as a whole.”

One of the themes Danko stated he observed was the “idea that encampments are benign” and a “tendency to gloss over some of the really true issues in terms of community safety and the impacts on neighbourhoods.”

He stated he could not support Farr’s motion because of concern that councillors are “getting involved in operational issues” and directed enforcement could “lead to confrontations, as we’ve already seen.”

“I really don’t want to be seen or to have any part in directing operations.”

Farr told his fellow councillors they must act to end incidents related to encampments.

“We can’t avoid the conversation of what these impacts are,” he said. “140 plus fires in our neighbourhood parks for the most part, a kid exposed by a homeless gentleman, and a mother told that F-off when bringing it up with the individual, the public sex, the drugs, the crimes of all sorts, on and off encampment sites, the violence, the public urination and defecation the all-night parties, and there’s lots of those, threats that have occurred and on and on and on.”

During the debate which followed the delegations, Clr Maureen Wilson revealed city staff informed councillors last week, in a non-public email, the General Manager of Healthy and Safe Communities advised Council “that we were at capacity in our shelter system for families.”

The City did not disclose this information to the public.

Ward 8 Clr John-Paul Danko opened his remarks reminding watchers he supported the previous encampment protocol, ” respecting that the majority of council did make that decision to revoke that and then move forward with enforcement”

“Listening to the delegates today, it’s pretty clear that there’s a lot of genuine care in the community, but also heard a lot of what I feel are really unfair characterizations of both the Ward Councillor and Council as a whole,” Danko states.

During questioning, city staff were asked how the motion would impact the separate work of housing support outreach efforts and bylaw enforcement.

Edward John, Director of Housing, says “Obviously, trying to do more in a shorter period of time is a challenge.”

He stated he “will have to monitor as to what staffing pressures that puts upon staff to achieve those timelines and what that means for the engagement process.”

Monica Ciriello, Director, Licensing and By-law Services, stated the chance does “not substantially change the process we will be following” and that it gives “a little bit more direction to timeframes in order to achieve compliance”.

Homelessness and encampments are a challenge across North America at present.

Kitchener has an encampment that has grown to “nearly 20 people”, New York City’s Mayor announced plans to clear encampments, while Louisville in the US state of Kentucky is opening a “secure outdoor space” with insulated tents, portable washrooms, and showers.

Later in the meeting, after the 4-2 encampment vote, councillors unanimously approved
Demolition Control By-law exemption for a rapid housing initiative at 221-223 Charlton Avenue East that will create 17 new units of affordable housing.