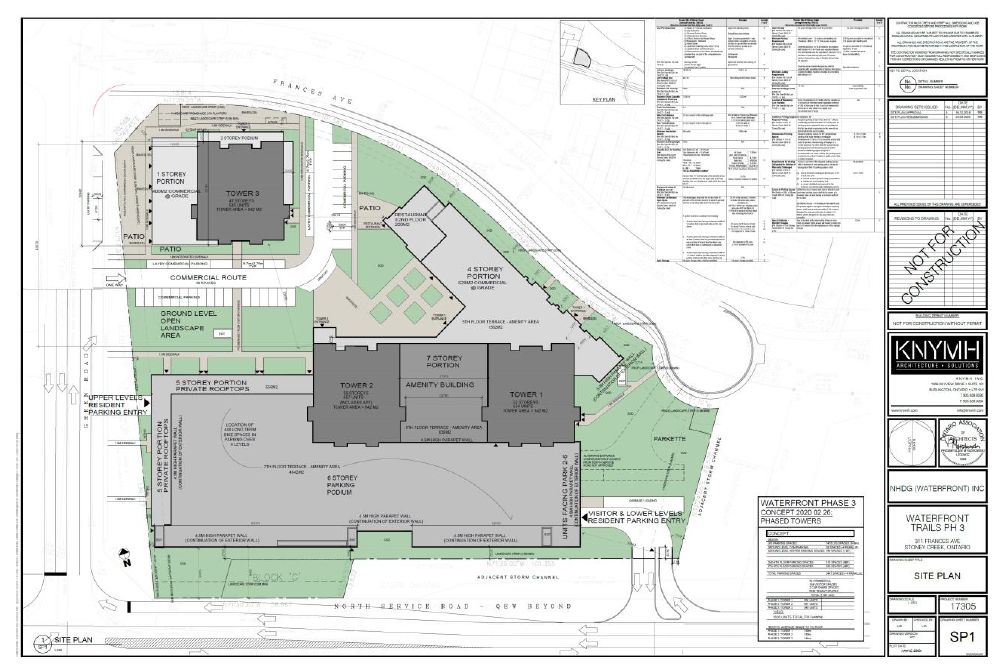 Render of the Site Plan layout for 310 Frances in Stoney Creek, which is now before the Ontario Land Tribunal on appeal.

New Horizon is appealing the decision of Hamilton’s Committee of Adjustment to deny minor variances sought for the development.

City of Hamilton staff opposed the minor variances, and will be participating in the OLT hearings to defend the denials.

Staff say the parking is insignificant for an area without transit service, are not in favour of the reduced amenity space, not in favour of the developers request to have amenity space on the ground level instead of commercial space as envisioned in zoning bylaws, opposed only 36% of the site being landscaped where zoning requires 50%, and asked the Committee of Adjustment to hold the line on planting strips abutting a flood plain, among the variances requested.

New Horizon is also appealing the staff denial of its site plan application.

“It is a monumental development, this is somewhere between 600 million to a billion in sales revenue. It’s going to take deep pockets to defend [the denial],” said Vivian Saunders of the Lakewood Beach Community Council. “We want to be part of that. But we will want to also be realistic going forward.”

Saunders stated it is realistic for the City to talk about mediation during the Tribunal process. The LBCC wants to be at the table.

Tuesday’s staff update was for information. Staff will return to Council at a future date for formal direction regarding the appeal, during the interim, the City’s internal legal counsel will oppose the appeal at the OLT.

The OLT files numbers for the CoA appeal is OLT-22-001995. The site appeal is being processed with a file number to be assigned.