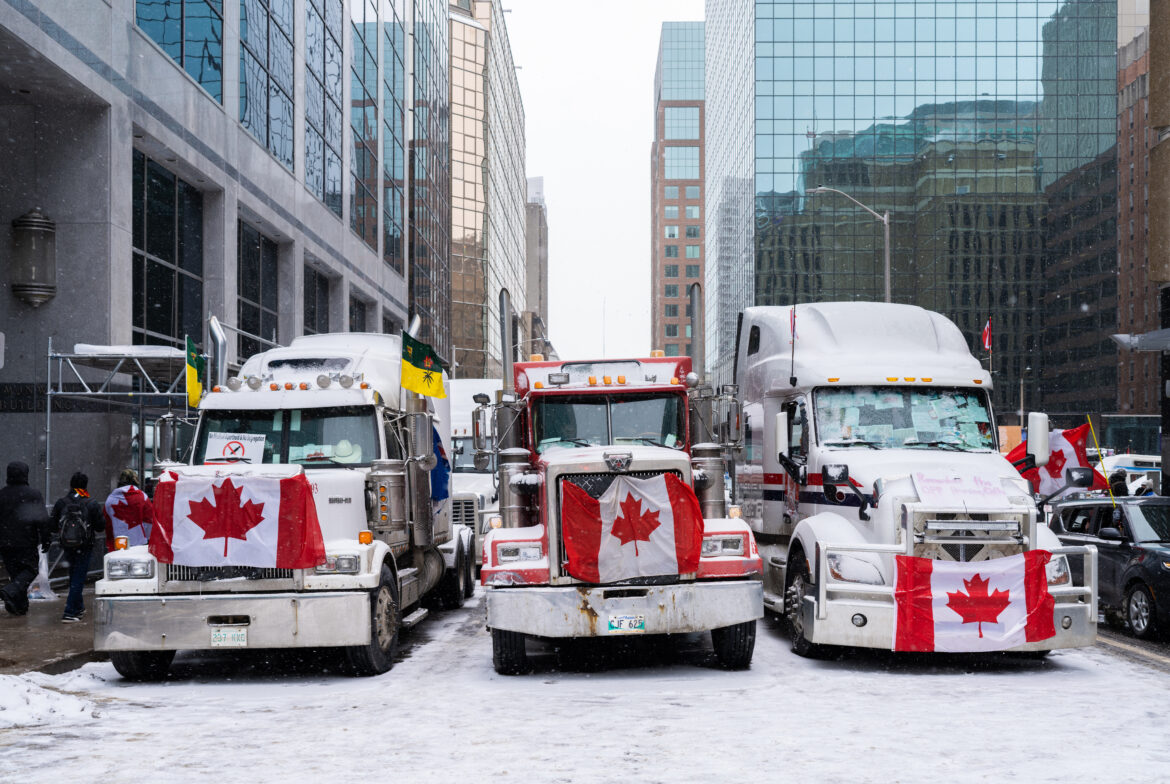 A group of trucks parked in Ottawa as part of Freedom Convoy occupation of the nation's capital city.

Funds from the campaign have been frozen by the order of Ontario’s Superior Court following a request from the Government of Ontario to stop the funds from supporting the ongoing occupation in Ottawa.

TPR analyzed the donor list to better understand who donated, and potential reasons that motivated some of the top donors.

Only one of the Hamilton donors used a government email, a Hamilton Health Sciences Corporation employee who donated $10.

What Neighbourhoods Donated Most

Financial support for the “Freedom Convoy” was most pronounced in rural areas of Hamilton, Ancaster, Dundas, Flamborough, and the West Mountain.

All amounts are in US dollars, GiveSendGo does not operate in Canada.

A handful of large donations tied to commercial addresses near Nebo Road account for most of L8W‘s $1885 in donations. Two donations account for $1425 of this total.

The largest single donations were $1000 each, with four donors giving this amount.

Many of the top donors own their own businesses, with many donating using their corporate postal codes.

Three of the donors appear to be academics or authors.

TPR looked at their online footprints for clues why they donated.

TPR is not revealing individual identities because we have not been able to confirm with the individuals they made the donations in question.

Numerous names on the Canada-wide list, which TPR is using, have been confirmed by other journalists across Canada, the aggregate data is valid.

Many of the Top 35 donors have profiles showing them obeying COVID regulations during the first year of the pandemic.

During the first week of March 2020, a $1000 donor retweeted a few threads calling on governments to act to contain the spread of COVID by implementing measures to flatten the curve, including social distancing and prohibiting non-essential activities.

After March 31, this person would not tweet about COVID again until November 2021, at which time they began retweeting videos questioning the motivations of government officials for continuing restrictions. They begin posting links on Facebook questioning vaccines, public health restrictions, and linking to the disinformation website The Epoch Times.

An $800 donor posted a video to Instagram from Parliament Hill on January 30.

A $500 donor posts to Facebook multiple times every day linking to anti-Trudeau and anti-vaccine stories on RebelNews, True North, Russia Today, and other sites. They support the Canada Unity MOU calling for the Senate and Governor General to remove Parliament.

Donor comments are included in the hacked list. Many of the Top 30 donors reference “tyranny” and express anger at Prime Minister Justin Trudeau.

The Instagram profile of another donor ($400) shows them following COVID rules, including only allowing one person at a time for outdoor pickup at their small business, during the first 15 months of the pandemic.

In August 2021, this person post negatively about restrictions on the number of people who can attend funerals. They write her 90+-year-old mother’s death is imminent. There is obvious anguish in having to decide which family members to exclude from attending the funeral.

They express frustration that only those vaccinated can attend in person, and question what they see as inconsistent COVID rules. Why can people attend church services without vaccination, but not a funeral in that same church, they ask.

The emotional sentiment of other donors shifts in fall 2021. A few begin questioning continuing restrictions following most of the population being double-vaccinated against COVID.

Posts expressing frustration increased in December when the Ontario government announces new COVID regulations in response to the spread of the omicron variant.

TPR choose to limit our search to these top 35 donors.

“Peaceful protest continues to effect global political change. The science supports this. Thank you for your sacrifice and courage,” reads a Feb 5 $100 donation.

“One of the most worthwhile causes in the world right now, literally fighting for our human rights against a tyrannical government. I wish I had a truck and could be there myself. I hope this helps!,” reads a Feb 5 $1000 donation.

“Keep on trucking – an inspiring pro-freedom movement against tyranny and corruption,” reads a Feb 7 $400 donation, the second donation by a person who also gave $400 on Feb 5.

“Once you understand that Justin Castro is but a puppet of his radical-left handlers, and that they want to destroy our successful Canadian culture, everything he does will make perfect sense,” reads the comment of a $200 donation.

How did we get here, and why?

The donors’ list will be used by social scientists who will conduct deeper research in the coming months and years to better understand how a “convoy” organized by alt-right radicals grew into a catalyst for disenchantment related to range of issues, and ultimately caused both the provincial and federal governments to declare states of emergency.

6 thoughts on “Analysis: Looking at the 547 Hamilton “Convoy” Donors on the Hacked GiveSendGo List”