An encampment on Ferguson Avenue North in July 2020

The City of Hamilton can enforce its Parks By-law to remove homeless encampments following a Ontario Superior Court today declining to grant an interlocutory [temporary] injunction against the City filed by five homeless or recently homeless individuals.

The five applicants are challenging the Parks By-Law prohibition against overnight camping and the erection of encampments as a violation of Charter of Rights Section 7 guarantee of the right to “life, liberty and security of the person.”

Lawyers representing them sought an injunction until the Courts hear and rule on the Charter challenge – which is not likely to be heard until at least the middle of 2022.

In a 257 paragraph ruling, Justice Andrew Goodman explained the issue in front of him was the injunction, not the broader societal issues regarding homelessness.

“No reasonable person in Canada would disagree with the proposition that homelessness, wherever and however it occurs, is a tragedy in Canada. However, the narrow issue before me is whether the City’s enforcement of the By-Law should be restrained by court order. It is not a wide-sweeping review of the underlying issue of whether more should be done to help the homeless,” Justice Goodman writes.

“The plight of the homeless, and marginalized members of society continues to be a pressing social, health and resource issue in Hamilton and across this country,” he wrote. “People experiencing homelessness is an unfortunate reality, and many homeless people lived and continue to reside on the streets and in city parks even before the advent of the COVID-19 pandemic.”

Following the ruling today, the City of Hamilton issued a statement that enforcement of the Parks By-law is resuming.  The City has a six-step process for removing encampments, and requires the Hamilton Police Service to remove any encampments which do not voluntarily disperse.

In its statement, the Hamilton Community Legal Clinic, which is counsel for the five applicants, states it is “disheartened that the Court considered the desperate act of sleeping in an encampment as a choice. We are concerned that this decision risks perpetuating the stigmatization of the unhoused population. By the City’s own admission, shelters are full and are unable to meet peoples’ disability related needs. This gap often results in people being denied entry or kicked out.

The Clinic adds, “the City must refrain from the aggressive and heavy handed displacement tactics seen in Toronto. It must ensure that people have an actual indoor space option before being told to move along.”

In the ruling, Justice Goodman finds the City of Hamilton is doing enough to provide shelter and support to the homeless population, and that people are not forced to encamp due to a lack of severe shortage of shelter spaces.

He ruled encampments are causing negative impacts upon the broader community, including attracting crime, disorderly behaviour, and some encampments are a risk to public health due to discarded syringes, public defecation, and other problems. 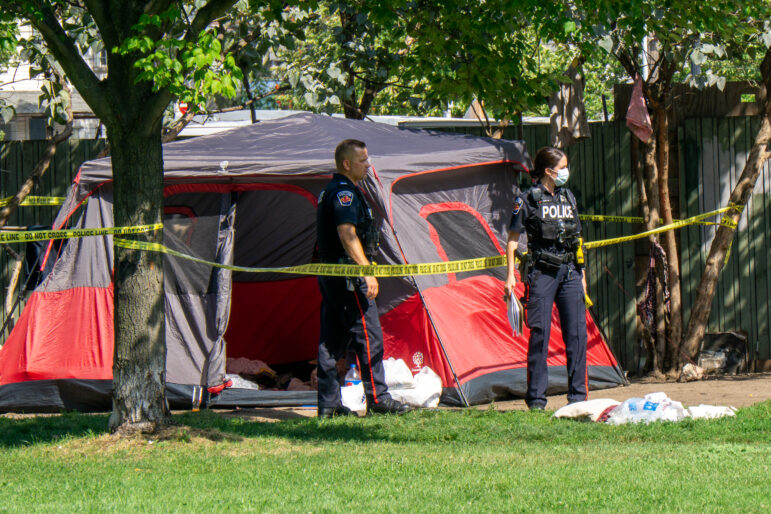 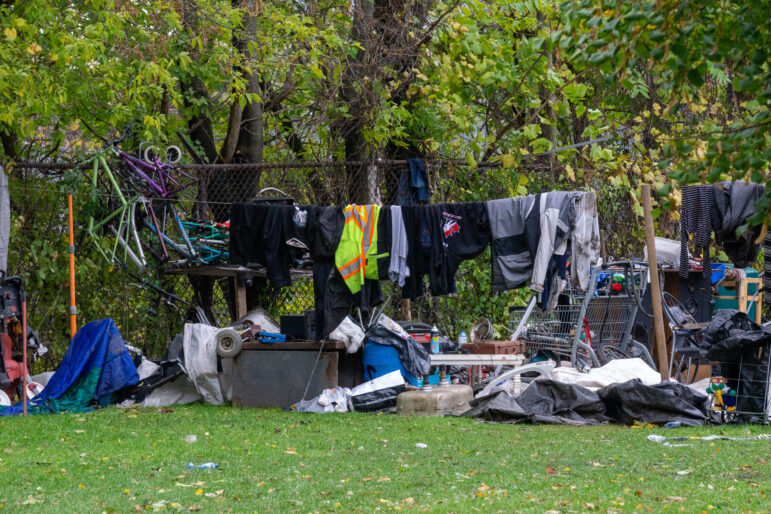 “Overall, there is reliable evidence of criminal activity, nuisance, health and sanitation concerns, illicit drug use and violence at or associated with some of these encampments,” the ruling reads. “There is a strong nexus between the reported crimes and other issues to the fact of the encampments … overall, I am persuaded that these areas of the parks are not safe.”

Justice Goodman distinguished the Hamilton case from cases in British Columbia. The B.C. Courts have granted limited injections to allow for some overnight erecting of tents, and most recently, a single encampment in Prince George.

The B.C. cases involve severe shortages of shelter spaces and encampments on vacant lots. In Hamilton, Goodman finds the City provides sufficient shelter spaces, and the encampments are in parks and green spaces.

The ruling states the applicants failed to show they would suffer irreparable harm from being forced out of encampments into homeless shelters or other options provided by the City of Hamilton.

“All of the named applicants have either received shelter or have been otherwise offered supports, accommodated or declined such overtures. Four applicants are no longer in an encampment,” Justice Goodman wrote. “Based on the record before me and the current status of the five named claimants, I am not persuaded that irreparable harm to these specific individuals arises to the appropriate legal standard and the applicants have not met their onus.”

Justice Goodman writes that shelters are safer environments for people than encampments, that the evidence showed “People sleeping outdoors experience a higher prevalence of medical conditions when compared to those staying in city-funded shelters and the unsheltered experience higher mortality.”

The evidence before the Court included an April 28, 2021 fire at the Kay Drage Park, which involved approximately 30 propane tanks and caused extensive damage. The Court was provided logs of paramedic responses to encampments, including several overdose deaths.

The applicants’ affidavits stated their concerns and fears regarding emergency shelters.

“The applicants’ fears or concerns related to shelters due to COVID-19 or for other stated reasons have been reasonably addressed by the City such that there are some adequate safe alternatives to sleeping in encampments. One is left with a situation where a limited – or even a larger group of people – such as these five applicants, may continue to resist using the shelter system despite the City’s best efforts to accommodate them,” the ruling states.

In the conclusion of the ruling, the Justice repeated comments he made during oral arguments two weeks ago that the Courts cannot make public policy decisions. “This case involves important, complex, and challenging social, economic and policy questions affecting homeless and marginalized members of the community. There are no easy solutions. These issues ought to be left to elected officials, health care and other professionals, social agencies and experts who are best equipped to address the welfare and needs of the homeless.”

The Charter challenge is pending. No dates are yet set for hearings.

Hamilton City Council will discuss the City’s homelessness response and shelter strategy at their Emergency and Community Services meeting on December 7.

[Editorial Note: the decision is not yet on CanLII. I am not posting a copy as search index this website. I do not wish for I do not wish some of the personal details to be the first result for the names of those involved.]

One thought on “Ontario Court Rules Against Injunction, City of Hamilton Plans to Resume Enforcement at Encampments”