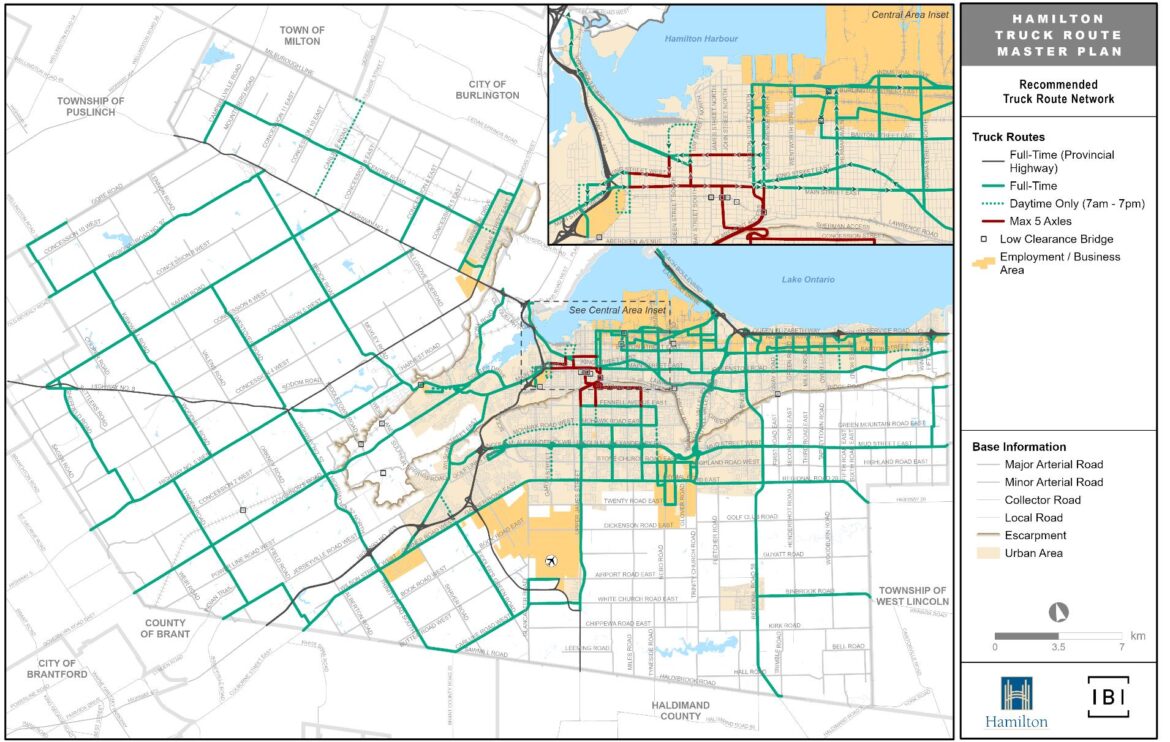 City Council’s Truck Route Sub-Committee will meet Monday beginning at 9:30 am to deliberate.

There are 33 registered delegations for the meeting.

A primary focus of the debate will be trucks in the downtown.

Some delegates are asking for a blanket ban on trucks traversing the downtown. Industry interests state a new proposal to restrict trucks to five or fewer axle trucks in the downtown and north Mountain is too restrictive and costly to their businesses. 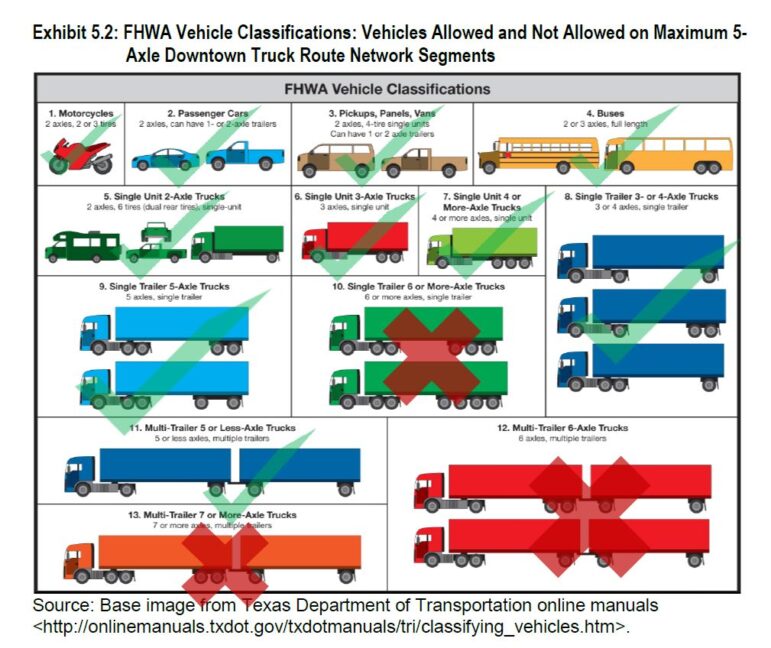 A City of Hamilton diagram showing truck types by axels.

The City report states trucks with more than five axles will be allowed to operate with a “special truck travel permit.”

The report does not detail any information about these permits.

City staff state the five-axel limit will “serve to divert large longer-distance trucks to routes that do not traverse the downtown area.”

Major port industries are opposed to the prohibition on their double trailer trucks.

“The limitation to 5 axels effectively eliminates our ability to operate within this area of the City or to use western/southern routes to access highways in that direction without first taking a more circuitous route to the east,” writes Mark Hebert, National Transportation Manager for Parrish & Helmbecker Milling Group.

P&H states the restriction will be costly for their operations, “P&H receives and ships a high volume of grain and flour, which involves hundreds of truck movements per day.”

City staff estimate the cost to P&H to be between $8.37 to $19.55 per round trip for trucks that currently travel through downtown to Highway 403.

The Hamilton Port Authority and Bunge will also delegate to Council. 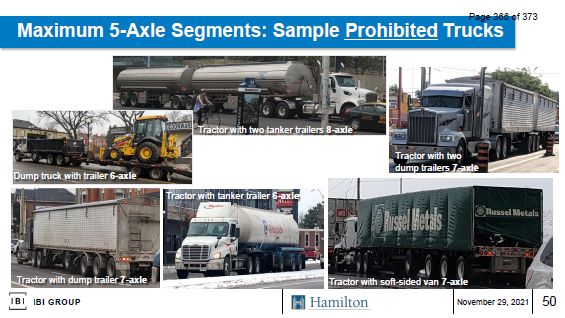 A City of Hamilton staff diagram showing pictures of trucks with six or more axels that will be prohibited from downtown truck routes.

“This balance is important so that business can continue to provide important tax revenue and remain profitable.”

He says if there is a limit, it should be six axels. He writes Fluke is concerned limiting trucks from passing through downtown will “create significant congestion and pose a safety risk” in East Hamilton.

“Our opposition to the original TRMP was focused on the 11th Concession East and Milburough Line in the northwest section of the city,” writes Greg Ryan of the group Respect Our Rural Roads (RORR).

“Given that both these roads have been removed from both the near term and long term TRMP, and given the long list of delegates, our presence at the Sub-Committee is no longer required.”

Residents north of the QEW in Stoney Creek plan to speak against allowing trucks to use the North Service Road between Grays Road and Centennial Parkway to access the QEW.

They state trucks should be required to only use the South Service Road to avoid residential areas.

“We hope that you, like us, places the value of human life as your top priority,” write Anna Roberts and Nancy Bleakley of the Lakewood Beach Community Council.

Ward 2 resident Frances Murray writes Council calling for a removal of trucks from downtown streets to enable a “vibrant street life” and encourage more small businesses such as cafes in the downtown.

Residents along Dickenson Road, near Hamilton’s airport, are opposed to additional truck routes in their neighbourhood. Airport logistics businesses are growing on the north side of the airport, and staff write new routes are required to manage truck traffic.

Ward 11 Councillor Brenda Johnson, who represents the area, will move a motion this week for the City to begin environmental assessments for a potential new highway link from the Upper Red Hill Parkway to the airport. Johnson says a dedicated highway will move truck movements away from roads with residential uses.

City staff state approximately $120-million in goods are moved by trucks to and from Hamilton each day.

Staff state the additional truck travel resulting from the five-axel regulation will equate to “higher levels of
greenhouse gasses (GHG) emissions and increased potential for motor vehicle collisions, which are contrary to the goals of the City’s Strategic Plan, climate change,
and Vision Zero Action Plans.”

They believe the restrictions will help enable “economic growth opportunities within the Downtown Secondary Plan Area” from improving “walkability, bikeability, liveability, public and environmental health in the downtown community and adjacent residential neighbourhoods.”

Earlier drafts of the plan included prohibiting trucks in many residential areas overnight between 7:00 pm and 7:00 am. Staff write that upon further study, the prohibition be difficult to enforce as many trucks conduct local deliveries at night.

Trucks with more than five axels, such as double-length fuel tankers delivering fuel to gas stations downtown, will be exempt as local deliveries.

Geographical limitations and one-way streets are two major factors in staff stating a truck route loop is needed to allow all trucks to travel on Barton Street East between Wellington Street North and Victoria Avenue North along the parameter of Hamilton General Hospital despite a desire from Council to remove trucks from the hospital zone where they have been fatal collisions involving trucks striking pedestrians.