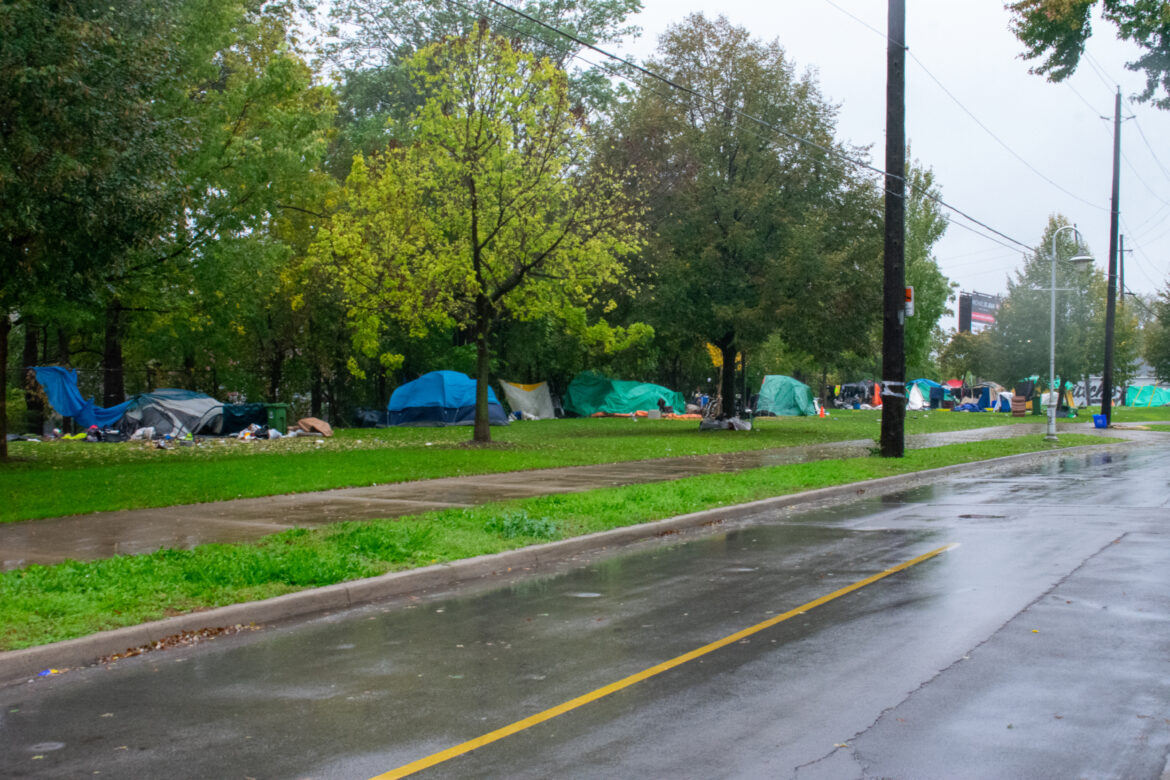 Ontario Superior Court Justice Andrew Goodman must decide if the Court will grant an interlocutory [temporary] injunction to restrain the City of Hamilton from using its Parks Bylaw to remove homeless encampments on public lands.

The Hamilton Community Legal Clinic (HCLC) is challenging the legality of the bylaw, arguing its blanket prohibition banning homeless individuals from encamping violates Section 7 of the Charter of Rights and Freedoms which states, “Everyone has the right to life, liberty and security of the person and the right not to be deprived thereof except in accordance with the principles of fundamental justice.”

The Superior Court is unlikely to hear the challenge until well into 2022.

The question in front of Justice Goodman is what should happen in the interim – should the bylaw be frozen, enforcement restrained by a temporary framework, or should the City be able to enforce the bylaw at its sole discretion with no direction from the Court?

If encampments are allowed in the interim, under what conditions would they exist?

Goodman states he will issue his decision as soon as practically possible.

Final written arguments from lawyers representing the City of Hamilton and the applicant homeless individuals were due today.

The HCLC lawyers represent five homeless Hamiltonians who state they have no other option beyond sleeping in tents for various reasons. [Since the challenge filing on October 4, one of the five gained stable housing]

Similar decisions in British Columbia and one other case in Ontario are informative to helping us understand what Justice Goodman will consider, and how the lawyers choose the points they argued during last week’s two days of oral arguments.

(My Twitter threads of each day last week are here: Monday & Thursday)

In determining if he will grant the injunction, Justice Goodman must apply the legal tests articulated by the Supreme Court of Canada in 1994’s RGR -MacDonald Inc. v. Canada (Attorney General) and Manitoba (A.G.) v. Metropolitan Stores Ltd.

The test consists of three conjunctive parts. They are: 1) there is a serious question of law to be tried; 2) the applicant will suffer irreparable harm if the injunction is not granted; and 3) the balance of convenience favours the interlocutory injunction.

If the injunction motion fails any of the tests, it will not be granted.

Justice Schabas found the challenge met only two of the three tests.

He agreed there is a serious question to be tried [the constitutionality of bylaws prohibiting the erecting tents to sleep in public places is a serious question of law that is not conclusively decided in Ontario]. He also agreed homeless individuals would suffer irreparable harm from being decamped.

He wrote in his ruling [para 75], “I find that the irreparable harm branch of the RJR test has been met here, and discuss the City’s responses below in my discussion of the balance of inconvenience.”

The City of Toronto successfully argued the encampments prevented some people from using public parks. The purpose of the park’s bylaw is to ensure public use of parks as a commons. The City showed it was actively engaged in providing indoor accommodation to those in encampments.

Justice Schabas quoted extensively from Batty v. City of Toronto, a 2011 ruling regarding the “Occupy Toronto” camp in a park.

“When read as a whole, the objective of the Parks By-law is quite clear and sensible – it is an attempt to balance, in a fair way, the different uses we wish to make of our public parks so, at the end of the day, we all get to enjoy them,” reads paragraph 95 of that decision.

In paragraph 143 of his decision last October, Justice Schabas writes, “In my view, the public interest purpose of the By-law, to make parks available to everyone, outweighs the interests of the applicants who seek a sweeping order preventing enforcement of the By-law in all City parks. The City cannot have its hands tied and be prevented from managing its parks so that they are safe and accessible to everyone.”

These decisions are conditional upon circumstances in B.C., the key being a significant shortage of shelter beds. It is noteworthy that B.C. Supreme Court Chief Justice Christopher Hinkson in Abbotsford (City) v. Shantz, 2015 BCSC 1909, determined there is no Charter Right to housing.

In Shantz, Justice Hinkson wrote, “The obligation to provide housing for the homeless, if it exists, is not a burden that the City must discharge in these proceedings.”

[Note: the B.C. Supreme Court is the trial level court in B.C., equal to the Ontario Superior Court. The B.C. Court of Appeal has ruled once regarding encampments in Victoria (City) v. Adams, 2009 BCCA 563.]

The B.C. rulings, prior to Friday’s new decision in Prince George (City) v. Stewart, 2021 BCSC 2089, involved situations where the number of homeless individuals substantially exceeded the number of emergency shelter spaces provided by the municipality.

[The Prince George ruling will not be considered in this case.]

The B.C. rulings held homeless individuals could erect temporary shelter (tents) overnight while there was a shortage of shelter beds. The rulings require tents be removed during the daytime hours. As Justice Hinkson wrote in Shantz, “I conclude that allowing the City’s homeless to set up shelters overnight while taking them down during the day would reasonably balance the needs of the homeless and the rights of other residents of the City.”

Two paragraphs prior to this sentence, Justice Hinkson explained his reasons for not permitting a sustained encampment: “The evidence about the Gladys Avenue Camp satisfies me that it is unsafe for the homeless and other residents of the City to permit any sustained occupation of a particular space by the homeless. The sustained presence of the homeless at the Gladys Avenue Camp has resulted in the accumulation of between 100 and 500 used syringes in a matter of days, human feces and rotting garbage left throughout the encampment, the presence of rats, and violence and criminal activity following the establishment of the encampment.”

In their arguments, lawyers for the City of Hamilton repeatedly referred to evidence of used syringes, concerns about human feces, and pests such as rats and skunks.

HCLC lawyers argued there is a shortage of, and unpredictability to, existing shelter spaces, that rules are too restrictive, and people are being denied shelter. They added an overnight-only tent protocol ( as in B.C. ruling) is unjustly onerous for homeless individuals with disability-related and health limitations.

The applicants argued the ongoing COVID outbreak is a factor the Court should consider because shelters close to new admissions during COVID outbreaks. These closures put pressure upon other shelters, such as in August when two of the three men’s shelters had outbreaks, and the third was full.

Lawyers for the City cited the B.C. rulings to argue against the applicants’ request for an injunction allowing encampments to stay in one place. They noted the B.C. cases only allowed overnight tents, and only when there was an extreme shortage of shelter spaces.

They repeatedly argued the Hamilton situation significantly differs from the B.C. cases where the shortage of beds numbered in the hundreds and municipalities cannot meet the need for spaces.

HCLC lawyers argues Hamilton is short around 100 beds of the actual need.

City lawyers argue each of the five named applicants have alternatives to encampments. They stated that the City is expanding shelter spaces and does not have a severe shortage like exists in parts of B.C. They added that only one of the applicants had been turned away from a shelter.

The other court decisions do not bind Justice Goodman. They are persuasive precedent, the Ontario Court of Appeal has not considered the issues of homeless shelters and encampments.

Justice Goodman is unlikely to deviate much from those decisions, especially Black et al. v. City of Toronto from last October.

This gives context to Justice Goodman’s questions regarding the present COVID situation, and if he could take “judicial notice” of the fact people are ‘learning to live with COVID’, “We are in court, kids are back in school again.”

While the Justice decided against taking judicial notice and will only use the COVID statistics provided in evidence, the current statistics show COVID is a lesser concern with vaccinations available than in the late summer of 2020 when the Black et al. decision was made.

Ultimately the injunction will be decided upon the third test, the balance of convenience.

The City of Hamilton parks bylaw arguments differs in two potentially significant ways from Toronto’s last year. Hamilton did not provide police reports, and most of the inconvenience evidence was circumstantial. The Hamilton encampments are smaller, tend to be on the edges of parks, and the most contentious encampment is along the greenway of Strachan Street West.

To the extent the sizes of encampments have grown in the past two months, the HCLC lawyers cited City Council’s decision to end the previous encampment protocol settlement, which for a year held the size of tent groupings to a maximum of five.

In this case, Justice Goodman is considering if he needs to conduct the balance of convenience test with the broader homeless community in mind or only the five named applicants.

HCLC lawyers noted it is impractical for them to bring the 150+ people living in encampments before the Court. The City lawyers cited case law which suggests Justice Goodman should only consider the five named applicants.

Of the five, one is now housed, one is incarcerated, one has not tried to access homeless shelters, and two have complex histories in homeless shelters. The City entered evidence that efforts to support them have continued consistently.

Justice Goodman expressed reluctance for the judicial body of the Court to substitute its judgement for that of the legislative body that is City Council. “I have trepidation with telling an elected body how to [act/govern] … you are in effect asking me to bury a law,” he stated asking the HCLC lawyers to address this concern.

The HCLC lawyers are asking Justice Goodman to allow encampments of up to six tents at least 50 metres from any playground, school, or child care centre, and at least 200 metres from another grouping of tents.

Justice Goodman stated, “relief is usually black or white. We are trying to get creative. It is not my place to get into public policy or social policy. I must be careful.”

The lawyer for the City, in their closing remark, stated that if a broad injunction is granted, it will enable anyone to set up a tent until the primary Charter challenge is before the Court at an undetermined date in the future.

In closing, the HCLC lawyers stated, “removing tents will not end homelessness.”

A decision is quickly expected in the coming weeks.

4 thoughts on “Will the Superior Court Grant an Interlocutory Injunction Preventing Removal of Encampments in Hamilton?”