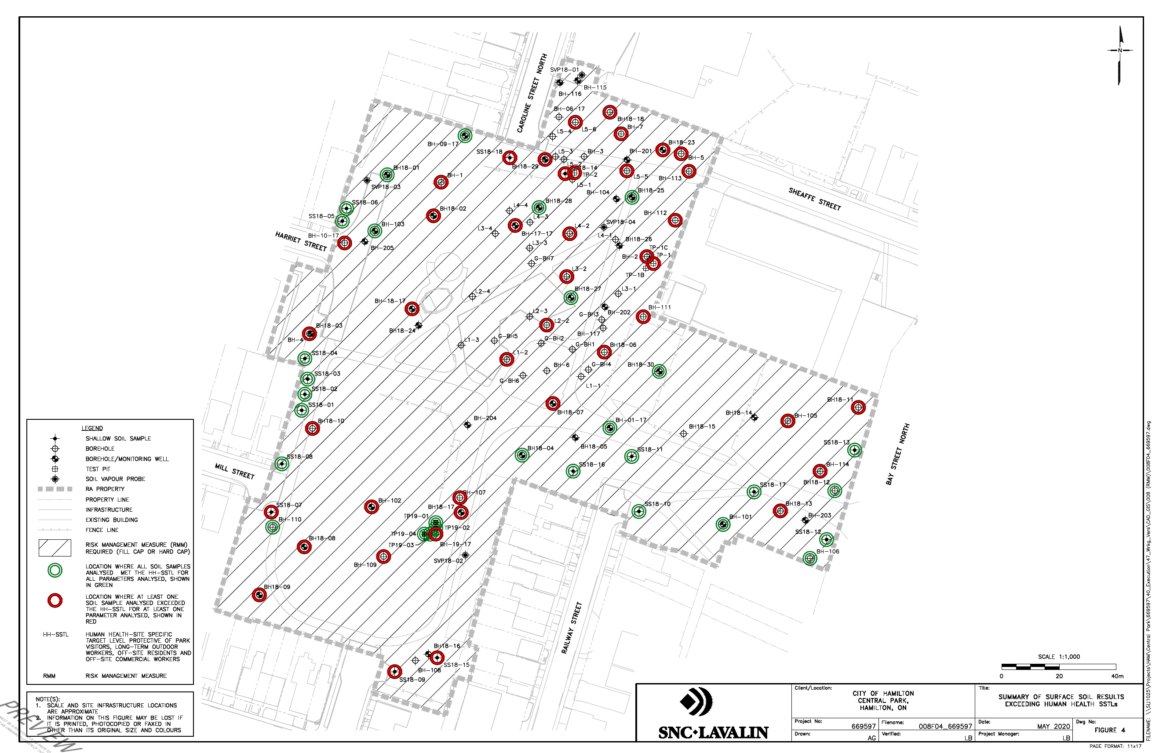 The soil under Hamilton’s Central Park, off of Bay Street North, is severely contaminated with various chemicals, including benzene, a carcinogenic substance linked to blood cancers.

Some of the park’s soil must be removed and disposed of as hazardous waste. Much of the removal is already complete.

A clean soil cap is needed to separate users from the contaminated soil, and a groundwater drainage system built to protect neighbouring homes from further contamination.

The park was created in 1981 after the old City of Hamilton expropriated the property from Currie Products in 1979. Currie operated a tar processing plant on the site and often stored toxic chemicals on-site as well.

Residents near the park warned of contamination for decades. Ontario’s Ministry of the Environment became involved in late 2012 after residents reported substances oozing out of the ground in the park.

The Ministry ordered the City of Hamilton to conduct testing, which found chemicals in the soil resulting in further testing.

“Concentrations of one or more of benzene, toluene, ethylbenzene, xylenes, PHC F2, and/or F3 exceeded the selected MECP Table 5 standards in subsurface soil samples,” reads a report on the testing.

The results will not surprise nearby residents who’ve warned about the pollution for decades.

Steve Rudaniecki, who had stage IV chronic lymphocytic leukemia in his 50s and was age 61 in 2013, spoke extensively to local media at the time, sharing how others in his home and nearby houses died of brain cancers.

Rudaniecki lived in his home bordering the Central Park site his entire life.

Speaking to The Hamilton Spectator’s Steve Buist, Rudaniecki stated his mother ‘had had a breast removed because of cancer, and she also had a brain tumour. His stepfather died from a combination of lung and brain cancer.”

He told Buist of people experiencing cancers in neighbouring houses and is quoted stating, “Coincidence? I don’t know” “But seven people and four houses in a row?”

The park’s contamination is detailed in recent environmental assessments commissioned by the Hamilton City Council and released to potential contractors last week.

There have been no public discussions of the contamination at City Council, nor has the City Manager’s Office released the reports in public statements nor media releases.

It is unknown how many closed meetings have been held by City Hall to discuss the reports during the past two years.

The 2019 and 2021 Environmental Site Assessment reports state the park requires an engineered groundwater mitigation system “to mitigate risks to neighbouring properties through indoor air inhalation from a groundwater source.”

The ESA is not a study of health impacts. No studies have been done regarding the health outcomes and effects for nearby residents.

The Central Park ESA reports became public last week when City Hall shared them with potential bidders for the contract to complete removal of the most contaminated soil, remediation of the ground, installation of groundwater drainage systems to stop underground toxins from continuing to endanger neighbouring residential homes and complete construction of the new Central Park before the municipal election in fall 2022.

The reports confirm the City of Hamilton has known of some contamination for decades.

In 1994, during the construction of a children’s play structure, workers found “just one foot beneath the surface, a foul-smelling, tar substance was discovered over an area of about a square yard,” reads a November 23 Hamilton Spectator article from that year.

The ESA reports cite a 1994 City of Hamilton memo and state at the time, “The City retained Golder Associates Ltd. to collect one sample from the excavation. Laboratory analysis identified exceedances of MECP residential/parkland land-use guidelines for arsenic, total petroleum hydrocarbons (TPH), benzene, ethylbenzene, PAHs and oil and grease current at the time of the assessment.”

In addition to the contaminants in the soil, it is suspected that a rail car is buried under the park.

In 2013, responding to Ministry of Environment concerns, the City conducted a ground-penetrating radar search in the northeast portion of the park.

“The findings identified several metallic buried objects, including one that had dimensions comparable to that of a rail car,” reads the 2021 SNC Lavalin report. “No other information was available at the time to confirm the presence of the rail car, or its contents.”

The suspected rail car site is marked 14 in the satellite image map below, and the rectangular shape in the image below that which maps data collected by ground-penetrating radar tests. 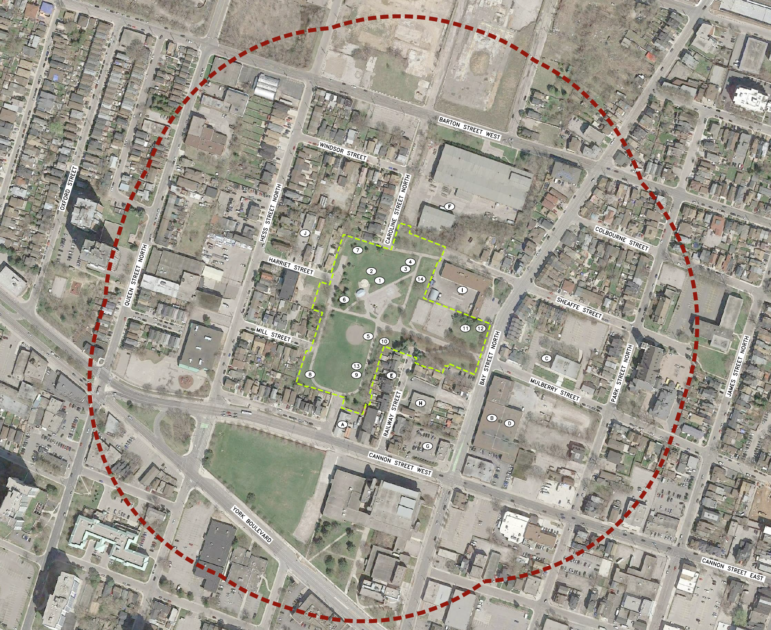 A figure from the Hamilton Central Park Environmental Assessment Report. Point 14 is where it is suspected a rail car may be buried underground 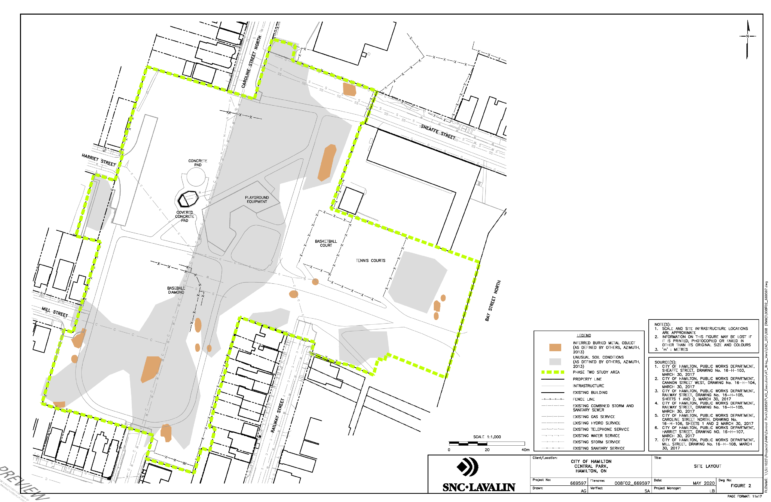 A figure from the Environmental Site Assessment for Hamilton’s Central Park which shows suspected & detected underground buried materials, including potentially a rail car.

“On reviewing the documents, it was shocking to me to learn about the extent of the contamination at the site,” she says. “If I have learned anything, it is that community members who have lived in an area for a long time know the area best, and they are usually right when they raise alarm bells about problems around them. Long-time residents should be listened to.”

Environment Hamilton says the City of Hamilton needs to share more information with the public, especially neighbours to the park.

“Given the issues at this site, there should be detailed information available to the public explaining the issues,” Lukasik says. “It’s not too late for the City of Hamilton to put some energy into being open and transparent about the situation at Central Park and the measures being put in place to resolve the legacy contamination issues there. Given that this is a public space and that the remediation is being paid for by the city, it is not unreasonable for details regarding this work to be shared with the public.”

EH is calling on the City to create a Community Liaison Committee for the remediation process consisting of neighbours, experts, city staff, and contractors. 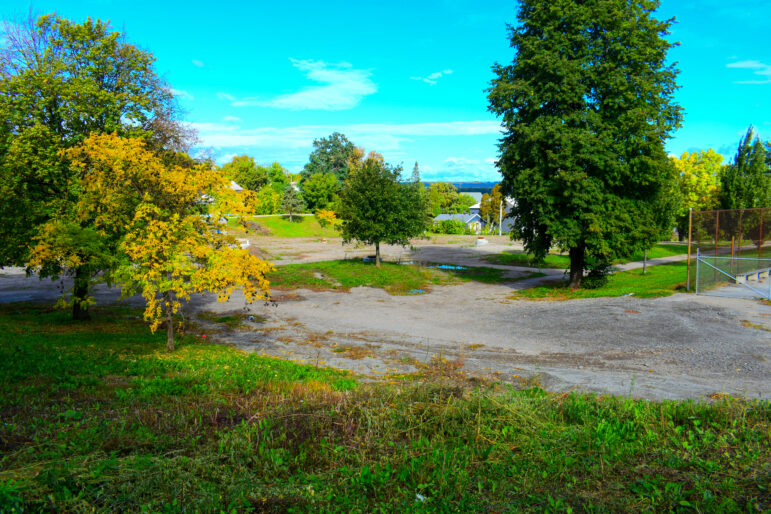 The City must construct a groundwater recovery trench “with at least two groundwater extraction wells” to stop the flow of contaminated groundwater into neighbouring properties. The system will require permits from the Ministry of the Environment. The provincial Environmental Registry of Ontario does not list a permit being issued yet.

Once all underground work is complete, the City must install a fill cap of at least 1 metre for most of the park, with 1.5 metres required for the most contaminated sections.

The planned community garden will use raised beds with a further separation from the ground soil, and soil will be brought in for the gardens.

The Environment Site Assessment is limited to Central Park and does not assess neighbouring properties. The ESA states they are likely contaminated due to past industrial and waste uses in the neighbourhood.

Bids for the Central Park contract close on November 3, 2021.