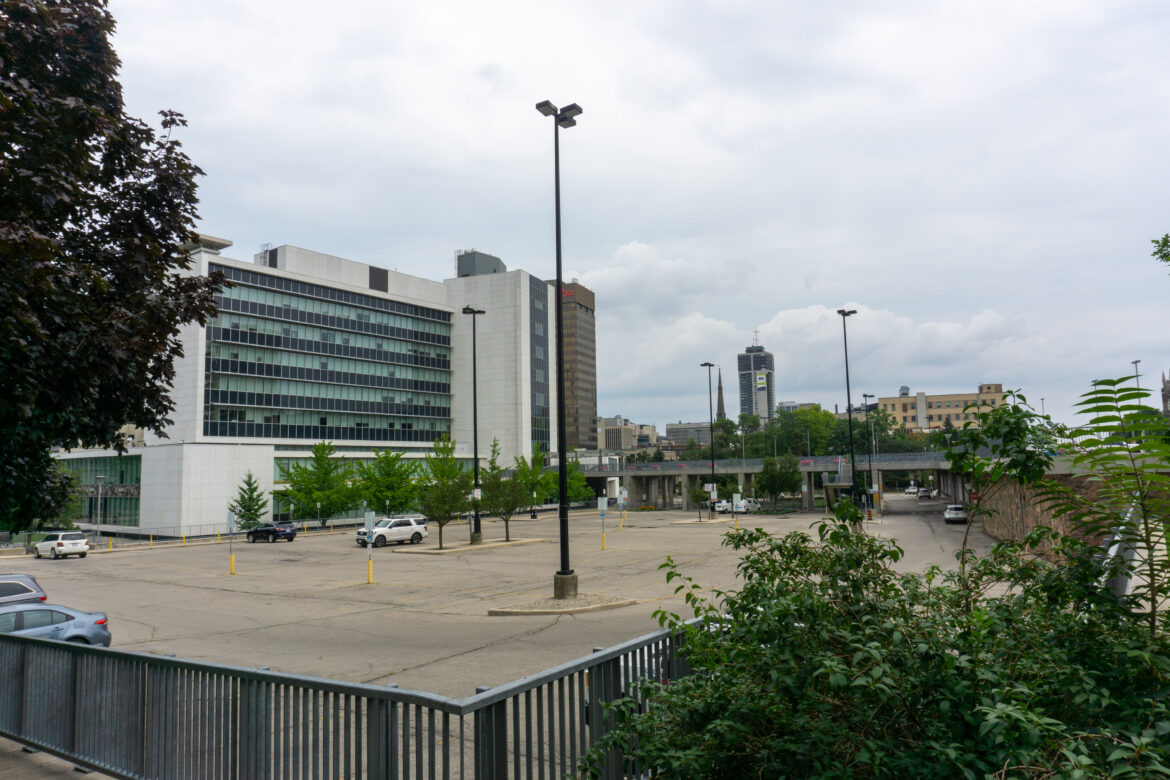 The lands behind Hamilton City Hall at 71 Main Street West

Hamilton needs Class A office space. City Hall hears this loudly, realtors say they have clients looking for it, and mid-rise commercial buildings are in the approvals process. What is missing are large office building applications.

Corporations are looking to have secondary headquarters in different economic regions.  Downtown Hamilton offers a great location within the regional economy of the Greater Toronto Area, and provides more amenities than comparable locations in Peel and York regions.

Entrepreneur Paven Bratch’s Metro Partners group was one of five parties to respond to a 2016 City of Hamilton request for interest in developing the rear portion of Hamilton City Hall.

In early February 2020, Metro Partners delegated to City Council asking for a process for the private sector – preferably their consortium – to bid to develop the city-owned parking lots behind City Hall at 71 Main Street West.

“We’ve been working on this since 2016,” says Bratch. “We have a lot of talent, but it is driving to Toronto.”

Bratch says Metro Partners will pay fair market value for the land, give the City of Hamilton first rights to lease office space, and provide community amenities such as green space, a grocery store, and wellness facilities in the new development.

Metro Partners wants to build three office buildings behind City Hall, a 12-storey, a 20-storey, and a 24-storey.

The group envisions the buildings being a “tech hub” attracting numerous information technology and systems companies by creating the critical synergies this sector seeks in locating offices.

Hamilton’s proximity to Toronto is a crucial advantage, Bratch says.

“Everyone from the world’s top real estate firms are frankly surprised at how much [development] KW [Kitchener-Waterloo] has, despite being so far from Toronto

Bratch says the proposal enjoys the support of leaders in the surrounding Durand neighbourhood.”

City staff are asking Council for approval to spend up to $100,000 to hire experts and consultants to prepare a strategy for the sale or long-term lease of the City Hall Precinct Lands.

In February 2020, Council discussed the Metro Partners proposal at length, and Ward 2 Councillor Jason Farr passed a motion directing staff to study the feasibility of a tech hub on the City Hall lands and report back upon next steps. The work was delayed by the COVID-19 pandemic.

A staff report in front of Council today confirms the feasibility of a tech hub in Hamilton.

The February 2020 debate provides insight regarding the positions of individual council members.

Ward 6 Councillor Tom Jackson said he would only vote for a long-term lease of the land to “preserve this entire city hall block as a public place in perpetuity for generations to come,” adding the plan lacked public space. The latest proposal responds by adding connected greenspaces on top of the parking podium.

Ward 9 Councillor Brad Clark said he wants the deal to be a sale of the lands, “I have tremendous trepidation that it includes the option for lease, I think that’s a mistake. I think we should be upfront that we’re talking about the sale, the dollars that come in from that sale can go into reserves, and we could put those dollars towards the future tower behind City Hall.”

Mayor Fred Eisenberger noted past Council discussed what to do with the lands behind City Hall and voted to retain them as public assets.

Farr said he is open to a sale of the land or long-term leasing, saying his support is “conditional on ensuring complimentary compatibility with City Hall parking, green space accessibility, green building design and amenity requirements.”

Clark, a former provincial cabinet minister, said he hears the demand for Class A office space. “If you talk to, as I have, some large proponents out of the Toronto area, they’re very clear. I’m not bringing a head office to Hamilton because you don’t have class A buildings. They are very upfront on it. They’re not interested in coming in and renovating an old building, they want to come in turnkey.”

This is the demand Bratch says Metro Partners are responding to, “Despite COVID having some significant impact on commercial space and the world, time is of the essence, we have an opportunity to move forward quickly.”

Metro Partners is seeking “financing and tax incentives matching or greater than that offered to Amazon subject to tenants meeting standards of quality of Amazon though preferably Canadian,” reads their latest letter to City Council.

Staff plan to report in early 2022 regarding steps.

A competitive bidding process may be required by the Canada-EU Comprehensive Economic and Trade Agreement (CETA).

In 2016, City Hall put out a “request for consultation” to see what interest exists in the possible redevelopment of the City Hall lands.

During the February 2020 debate, many council members said they want a competitive bid process for the redevelopment. 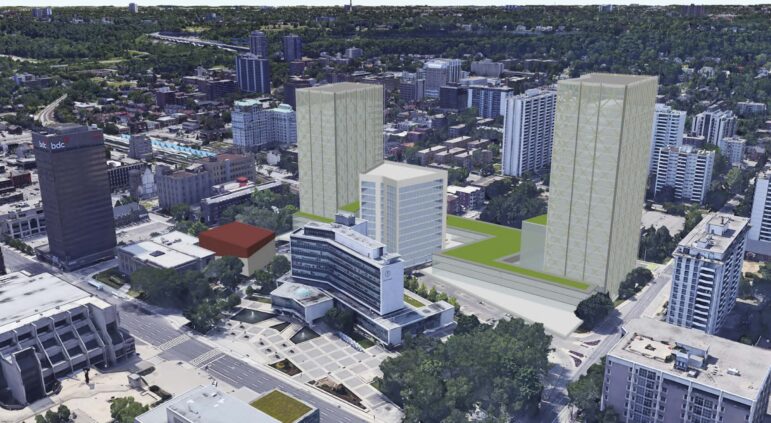 Metro Partners render of their proposal in August 2021