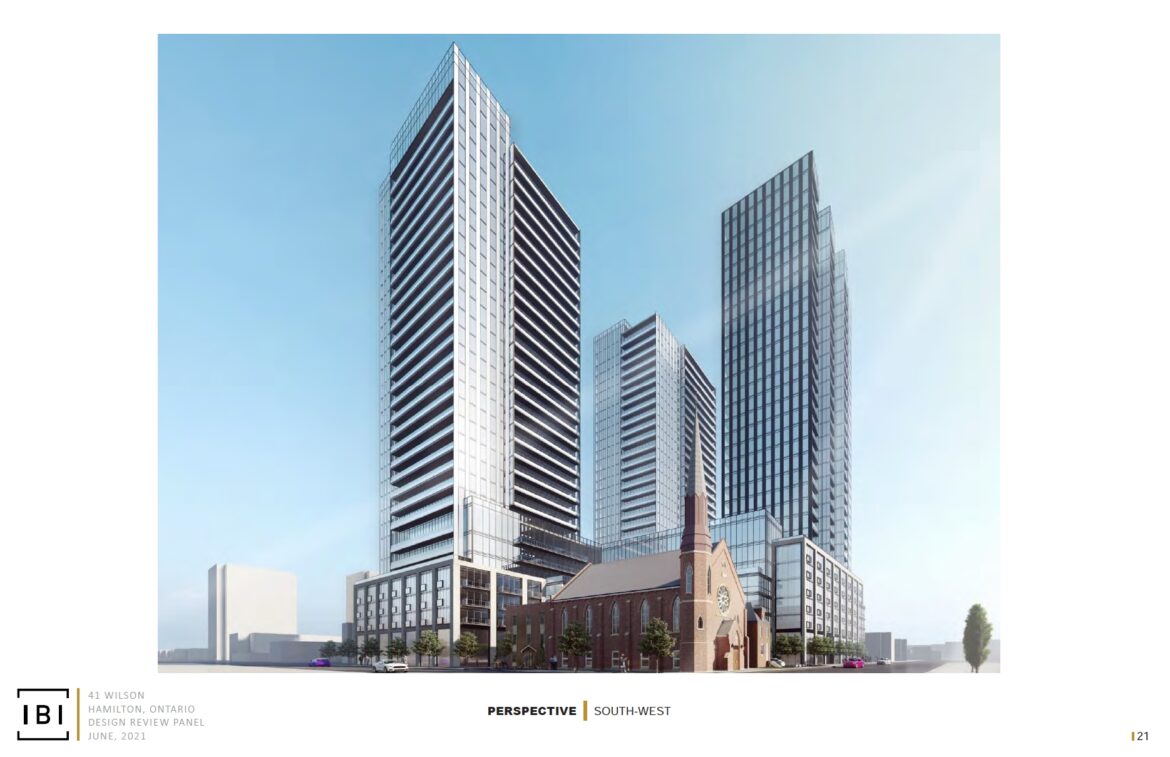 Rendering of the proposed three tall building development at John and Wilson in Downtown Hamilton as presented to the Design Review Panel in July 2021.

The current proposal is 908 residential units with 1,784 m2 of retail on the ground level of a proposed seven-storey podium. The podium will internally contain 505 motor vehicle parking spaces and 469 bicycle parking spaces.

Hamilton’s Design Review Panel praised the plan with some reservations about the bulk of the podium, the public realm surrounding the buildings, and the podium’s relationship with the Lutheran church on the northeast corner at Hughson and Wilson. 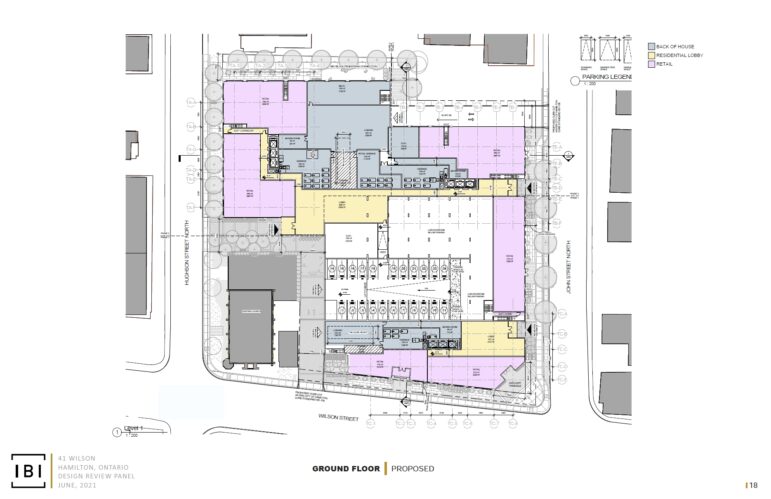 Ground-level floor plan the proposed three tall building development at John and Wilson in Downtown Hamilton as presented to the Design Review Panel in July 2021.

“I do appreciate your very thoughtful and appropriate response to the City’s tall building guidelines,” stated DPR member Dayna Edwards. Edwards is a planner and urban designer. “I think it’s a strong development in that the parking is wrapped in the podium with active uses, you have good ground floor retail, and I do appreciate the three-bedroom units … I think that allows for families to also move into downtown Hamilton.”

“I agree with the others around the opportunity for a podium that better responds to the scale of the church, and I think there’s a couple of ways that you could do that,” stated Edwards. “You could also look at more brick on the podium that would fit in better with the heritage context.”

“This proposal is not very sympathetic to the historic buildings and the public realm,” said DPR member Jana Kelemen. Kelemen is a planner and urban designer. “I would strongly suggest that the podium along Wilson [Street] should be lowered and both of the podiums around the church along Hughson [Street] and Wilson should be pushed a little bit farther into the site, even if just a little bit to give that church the prominence and the views that it deserves.”

The project’s architect, Mansoor Kazerouni, explained how their design relates to the church.

“The church obviously occupies a very prominent location, a prominent presence at the corner. In terms of the materiality, we were keen to let it stand on its own and not try to mimic the red brick,” Kazerouni stated. He said they plan to use Winham brick “which has this vertical expression that really came out of the vertical buttresses that prominently occupy this face of the church” that picks up on the “rhythm of vertical piers interrupted by windows”.

A single-family home and an automotive garage business on John Street will be demolished to make way for the development. DRP member Joey Giaimo, an architect with a specialization in heritage, suggested a focus on salvaging and reusing materials from the existing buildings instead of conventional demolition.

DRP Chair David Clusiau, an architect, encouraged the developer to use underground parking to lower the podium as this be “more in keeping with the fabric” of the surrounding area.

“It’s extremely solid submission,” Clusiau stated. “We do have a sense of quality that this development will have in the long run and will encourage you to go further.”

Emblem is presently building a 14-storey condominium tower at 1 Jarvis Street. Construction at John and Wilson is expected to start after that project is complete.

The developer’s submissions to the DRP are available on the City of Hamilton website. 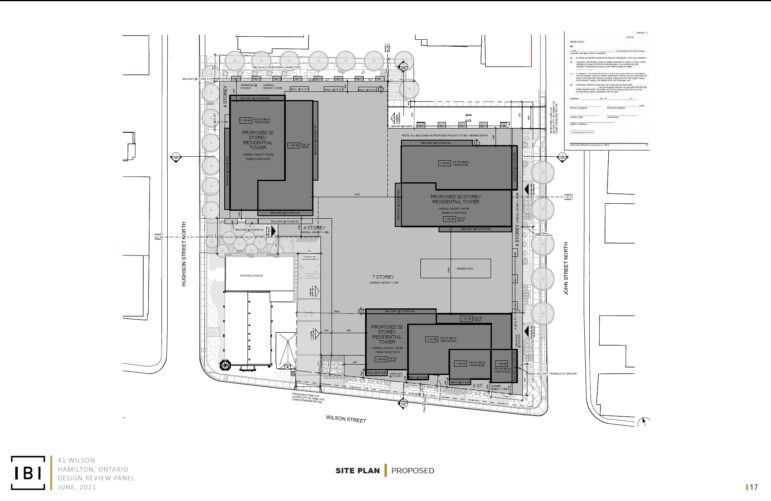 Floor plan of the proposed three tall building development at John and Wilson in Downtown Hamilton as presented to the Design Review Panel in July 2021.