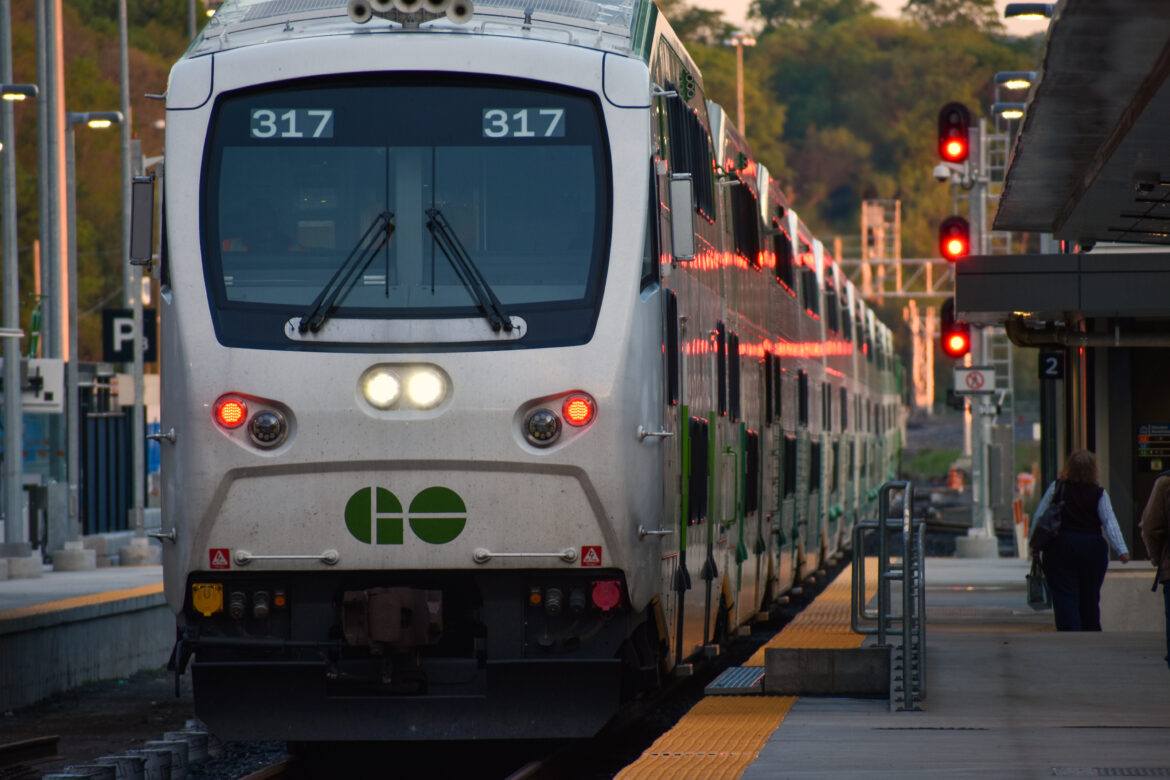 A GO Train pulling into West Harbour Station in May 2017

There’s a deliberate campaign to fix public transit to and within Hamilton.

The federal and provincial governments have announced over $3.8-billion in new funding for transit in Hamilton: 100% funding of LRT, significant funding for the new HSR maintenance and storage facility (the bus barn), many smaller pots for transit initiatives, and now all-day train service to West Harbour.

What does it mean for GO riders?

Travel time is one hour and 17 minutes. The full schedule is here.

All four trains out of the Hamilton Downtown (Hunter Street) station are back in service. These four trains are stored overnight on the tracks just east of the station and are critical to GO returning to 15-minute peak service between Oakville and Oshawa.

The trains will serve all stops. Prior to the pandemic, peak service trips of Hamilton operated express from Clarkson station to Union Station. The additional stops add 12 minutes to travel time.

We may see further schedule changes in September.

[Due to much lower passenger levels, the dwell time in each station is shorter than usual. This decreases the journey’s length.]

What does it mean for Special Event Extras?

GO operates extra trains during special events, and those “extras” have resumed in recent weeks for Toronto FC soccer games and to respond to increase leisure travel during weekends.

Even if the extras continue to end at Burlington GO or Aldershot GO, the hourly West Harbour service remains attractive for going to events in Toronto.

As a bonus for non-event Hamilton riders, the hourly West Harbour service provides an alternative to over-capacity buses which did not previously exist.

Will the HSR provide coordinated service between West Harbour and Downtown?

Mayor Fred Eisenberger states the HSR will review the A-Line schedule and he hopes it will integrate with GO’s West Harbour service.

“There is an intent to expand and improve the service frequency and in volume, and that will directly connect to this GO station”, the Mayor stated.

What is the cost of operating trains to West Harbour?

The question was asked by CHCH to Minister of Transportation Caroline Mulroney.

Mulroney responded, “the overall cost is part of our overall budget for Hamilton.”

I asked Metrolinx what is the hourly operating cost of a ten-passenger car train, and if they consider the additional service a 30-minute cost (13 minutes each direction from Aldershot GO) or the added cost of a full train set on the Lakeshore line to provide the service.

The response by email was “a breakdown of operating costs by train isn’t available.”

[If you wish to read about the challenges of determining operating costs from budget statements, here’s a recent academic attempt to do so at the University of Toronto]

Further Notes from the Press Conference

MPP Donna Skelly (Flamborough-Glanbrook) took the opportunity to contrast her Conservative Party from the previous Liberal Party government stating the Liberals repeatedly promised all-day GO service and it is being delivered by a Conservative government.

Minister Mulroney praised Skelly for securing the all-day service, spoke about the importance of all-day GO service, and how happy she is to be announcing transit funding for Hamilton again.

Hamilton Mayor Fred Eisenberger thanked them for the latest funding announcement and jokingly ended his thanks with “Phil, that, you know, we do have a Confederation Station down the road. What have you done for me lately?”

The joke was delivered well and people chuckled with everyone enjoying a good news event.

During media questions, one of the young journalists who recently moved to Hamilton asked when service will extend to the “Centennial” and Grimsby stations. Metrolinx CEO Phil Verster answered that GO is working to add the tracks out of West Harbour and improvements needed to get all-day train service to the “Confederation” station and beyond.

The reporter politely followed up stating their question was about the “Centennial” station. People quickly noted Centennial/Confederation are the same station. Centennial may be a better name for the station as Centennial Parkway is a better-known landmark than Confederation Park.

[The present group of early-career reporters in Hamilton are excellent and are learning Hamilton. They are interested in our localisms, curious about our city, and happy to be here.]

To Metrolinx, I asked how they will deal with service interruptions noting Lakeshore West trains often terminate at Burlington GO instead of Aldershot GO due to freight trains having priority on the rails at the CN yard in Aldershot. Adding to the logistical challenges of servicing West Harbour, the extremely bus rail interchange between CP and CN at Bayview Junction.

How will GO get people to West Harbour during service disruptions?

Metrolinx CEO Phil Verster stated they are working on the details of those service interruption plans.

“Our ownership of our lines really ends at Burlington”, Verster stated. “The work we’ve done at Bayview Junction, which was both track and signalling to separate freight lines, [the CN] yard, and our own services was really crucial.”

Verster says Metrolinx is working to add its own tracks between Burlington and Aldershot. Of the answers today, this is the most interesting. When GO owns all the track into West Harbour, Hamilton will be able to see trains every 15-minutes.

We can all easily imagine a near future with an efficient reliable HSR service connecting to trains that leave every 15-minutes going to both Toronto and Niagara.

Onwards to the future. 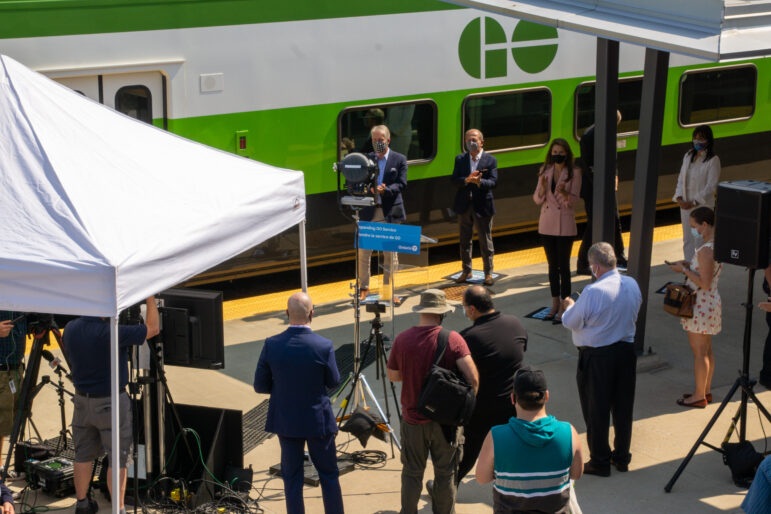 The announcement of all-day GO service to West Harbour.