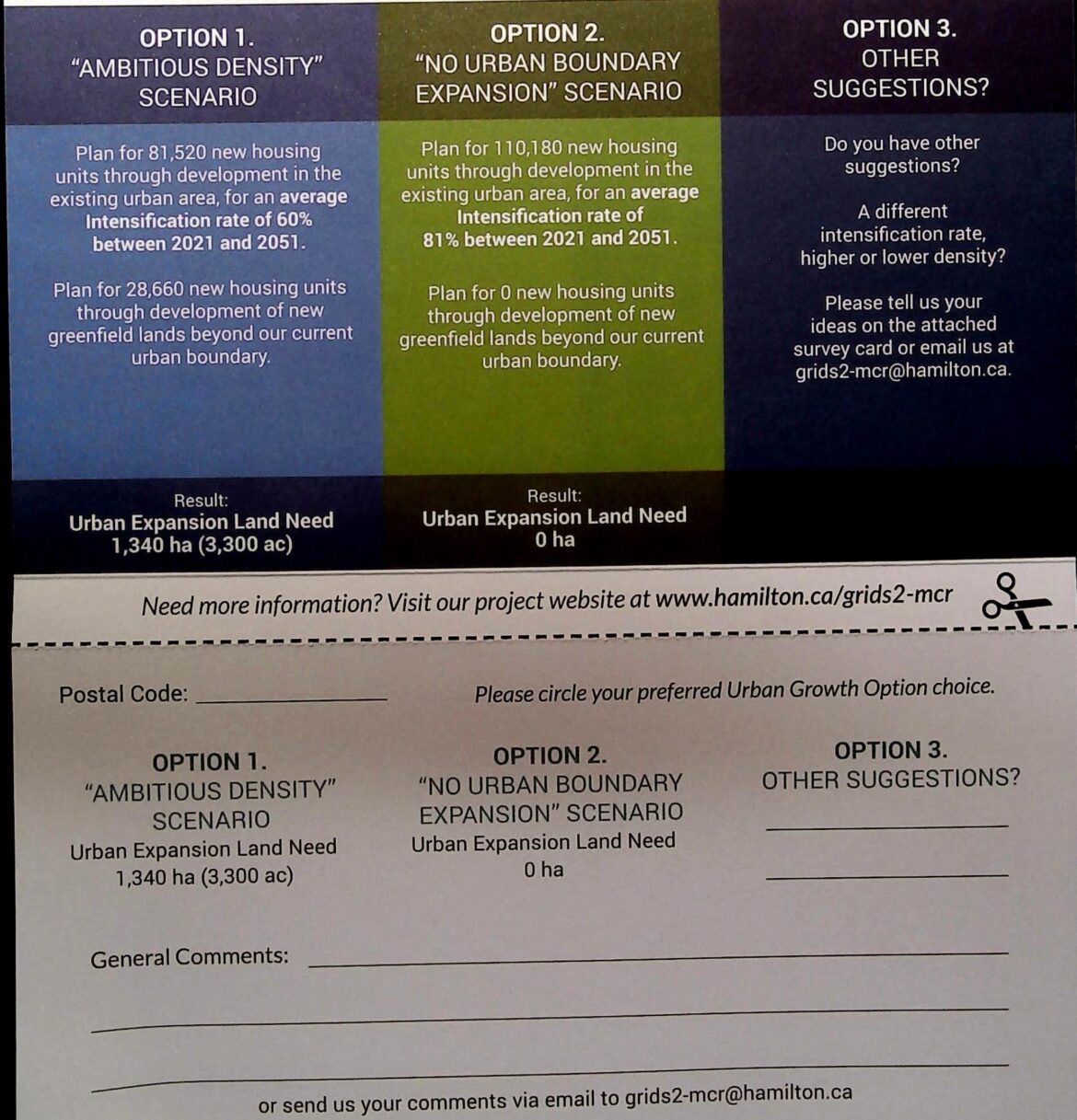 The one-page front-and-back returned postage flyer drew the ire of Ward 12 Councillor Lloyd Ferguson who claims the survey is, as he put it, “I’m trying to find the right word, it’s probably going to be slanted a certain way because of the way it was asked. It’s like the Quebec referendum to support resolution numbers such as such, and without having an explanation of what it means”.

“When I read it [the survey], oh my goodness, this thing is going to be overwhelmingly in favour of intensification, which will be very sensitive to my community”, Ferguson says.

Ferguson is in favour of expanding the urban boundary and absented himself from the vote to engage the public by survey. The March vote to send the survey was unanimous with Ward 5 Councillor Chad Collins also absent.

The survey’s question is not leading or vague – unlike the Quebec referendum question.

It is overtly neutral asking “Which Option Do You Prefer” with three choices:

On the front, it simply states “Hamilton is growing. The Province of Ontario requires Hamilton to plan to accommodate 236,000 more people by 2051” [emphasis in the survey] with basic definitions.

Below is the statement “if the City plans for more intensification and higher density development within our existing neighbourhoods in the urban area, it will reduce the amount of new greenfield lands outside of the existing boundary needed to 2051”.

Councillor Ferguson’s complaints are based on his desire to see greenfield development.

As Hamilton Conservation Authority Chair, he most recently pushed for the paving of a wetland. The Conservative Authority Board voted against paving the wetland, following an outpouring of community opposition.

Ferguson knows the public overwhelmingly supports the Greenbelt, as Ontario Premier Doug Ford has repeatedly learned each time he muses about encroaching upon or modifying the boundaries to allow developers to build within the existing protected area.

Greenfield is synonymous to the Greenbelt for most people.

Thus, the root of Ferguson’s complaint – he knows the public will overwhelmingly oppose building on greenfield lands.

It is understandable that City of Hamilton planning staff kept the survey simple and did not present arguments for or against the options.

Ferguson’s developer allies have not put forth a concerted campaign to argue what they see as the merits to the “Ambitious Density” plan to push Hamilton’s urban boundary to include nearly all Hamilton’s remaining greenfield lands not already in the Greenbelt.

Nor has anyone (including myself) put together a good site with arguments for and against the two options. In this regard, we have fallen short of ensuring that we fulfill the deliberative part of our democracy.

I will note The Hamilton Spectator ran good op-ed pieces in late March regarding the proposals and presenting those side-by-side is a good option for those seeking to deliberate.

The Survey, Hamiltonians as represented by it, versus Doug Ford

Ultimately, the survey’s primary purpose is to challenge Ontario Minister of Municipal Affairs Steve Clark’s declaration that if Hamilton City Council refuses to expand the urban boundary, he and local MPP Donna Skelly will expand the boundary by provincial order.

With thousands, potentially tens of thousands, of Hamiltonians having stated they do not want a boundary expansion (and tactility engaged in democracy), the Tories will face a risky political cost in overriding public opinion to pave over greenfield.

Ferguson is foreshadowing the challenges which will follow a boundary freeze – while people may say they want intensification, they often want new development elsewhere in the city. 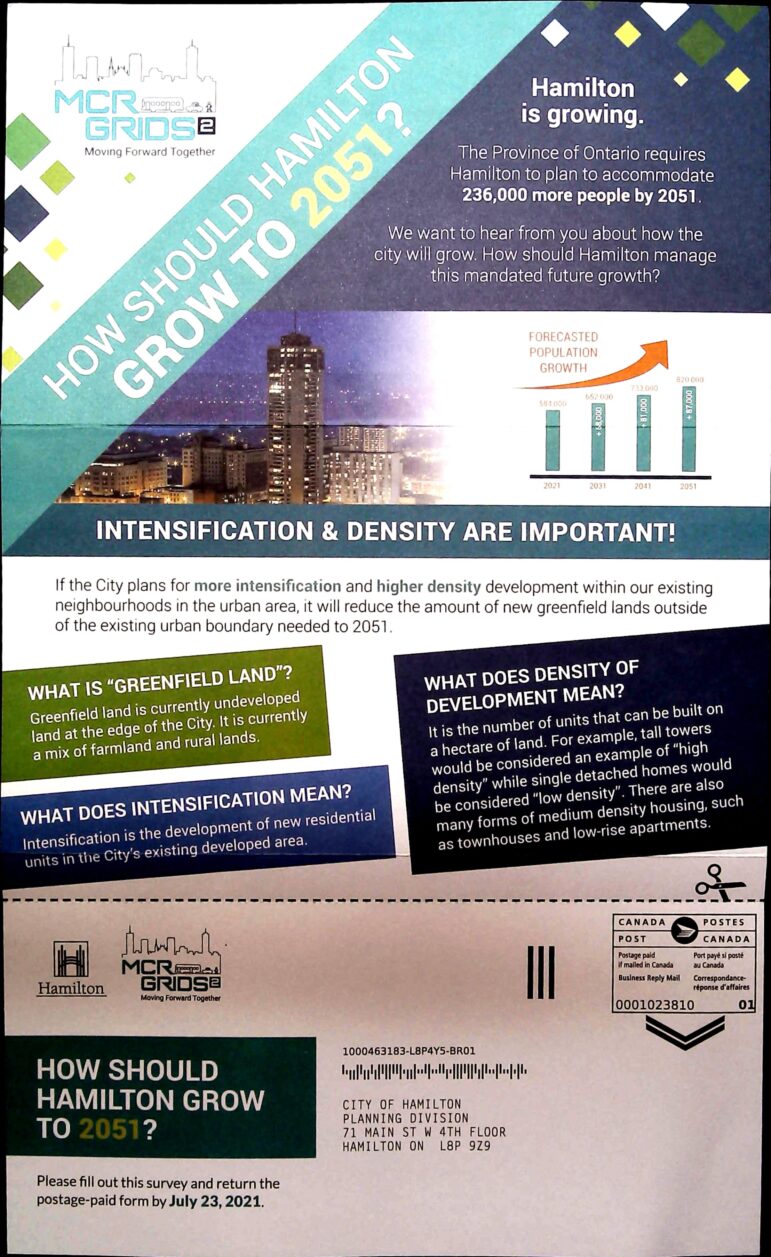 The front of the Hamilton GRIDS2 Urban Boundary survey. 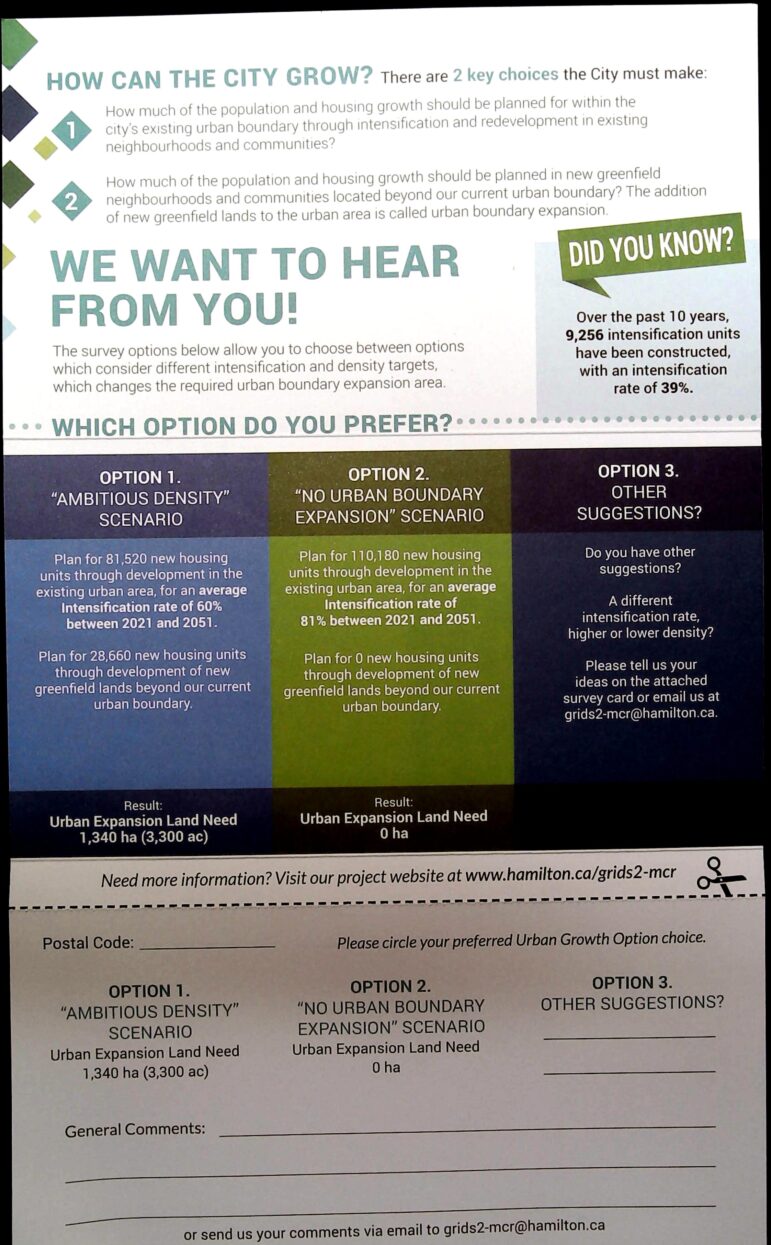 The reverse side of the Hamilton GRIDS2 Urban Boundary survey.

6 thoughts on “The City Urban Boundary Survey Is Not Slanted, It Is Bland”