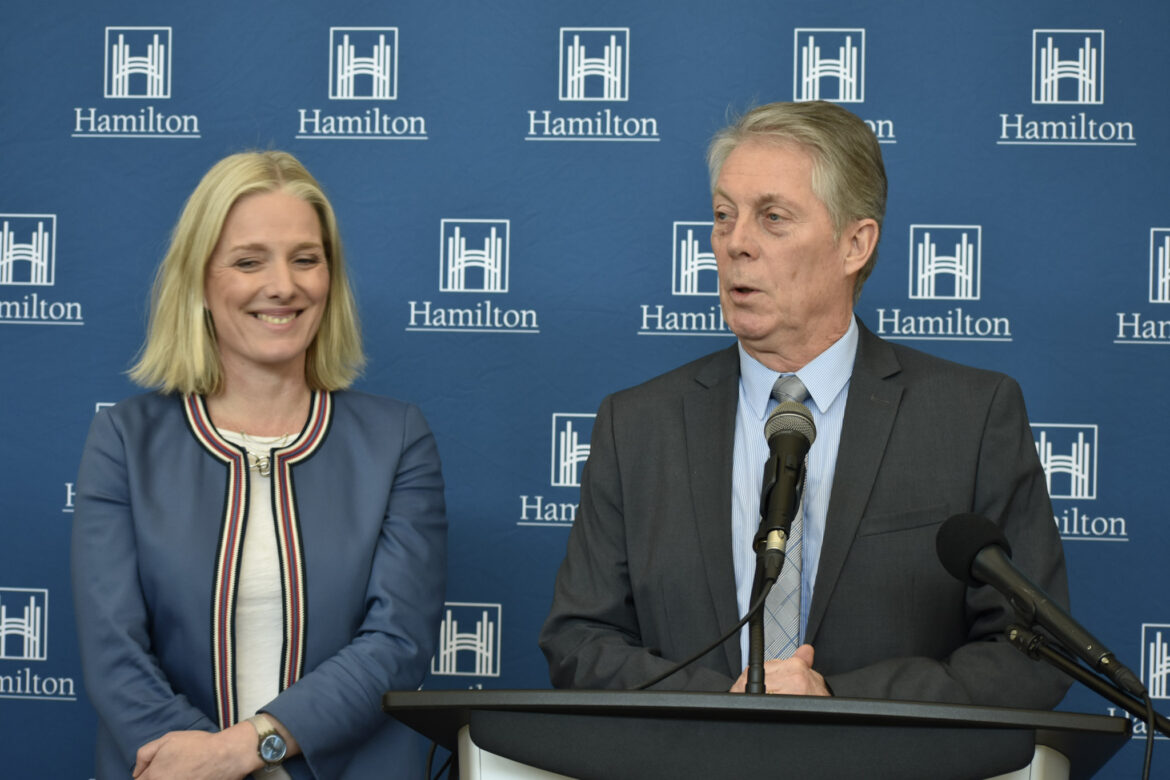 Catherine McKenna at a joint announcement in Hamilton City Hall in March 2019 with Mayor Fred Eisenberger.

Catherine McKenna is not seeking re-election to Parliament.

At a press conference this morning, she said she plans to spend more time with her children, and will keep working to address climate change.

“When I first asked the people of our community, our awesome community of Ottawa Center to support me, my kids were four, six, and eight.

Now my youngest is 12. He’s kind of really a teen. And my eldest is off to university in a year. I don’t have many years left with them at home. And I want to spend more time with them. They’re pretty awesome”, McKenna said.

I am hard pressed to think of another person made as much of an impact during five years in Parliament.

Speculation about what McKenna will do next reflects her proven abilities, there are plenty of options for her.

Born in Hamilton, McKenna is a champion for her hometown. Rare is a McKenna speech which does not reference her Hamilton roots.

Today was no exception.

“I got into politics because I wanted to help people. It kind of sounds corny and cliche, I know, but I’m still a girl from the Hammer at heart, and the Hamilton my parents raised me in. It taught me that your friends and neighbours matter as much as anyone you’ll ever meet.”

Most recently, working alongside Hamilton West-Ancaster-Dundas MP Filomena Tassi to secure the approval of an unprecedented deal for Hamilton’s Light Rail Transit project.

Her announcement today should not impact Hamilton’s LRT project. The funding is already approved by both the federal and provincial governments, and while Hamilton City Council still needs to formally sign-off on the Memorandum of Understanding in the next few weeks, the project is going to happen.

[Hamilton City Councillors who wish to oppose LRT know cancelling the project means Hamilton will not get any other infrastructure funding, and they will have to answer to voters for turning down funding which could end up in Waterloo instead.]

McKenna’s speeches, both as Minister of Environment and Minister of Infrastructure, regularly discuss municipal initiatives to decrease carbon emissions and improve climate resiliency.

McKenna’s record of achieving results, especially facing significant opposition, and, sadly, harassment and threats to her safety, means she will be sought after by many organizations.

Already, there is talk of McKenna as Mayor of Ottawa, and people want to draft her to the role. Asking if she was thinking about running to be Ottawa’s Mayor, she stated “I am not running in the election in the next mayoral election or ever. Although that’s definitive, that’s not even like possible.

But why not Hamilton? For a fleeting few moments last night, there was the opportunity to muse about McKenna running for mayor in her hometown. The headlines practically write themselves.

Cities are where climate change will be addressed, from the built environment to responding to disasters resulting from climate change.

What better place to address climate change than cities?

Where better for a person committed to addressining climate change to do so? Hamilton is in the centre of the Greater Golden Horseshoe. We are at the intersection of dense urban neighbourhoods, the tender fruit growing micro-climate of Ontario’s wine belt, the farmland of Southern Ontario, the growing urban centres of the Waterloo tri-cities, Guelph, Milton, and a quick train ride into Toronto.

We have it all.

The Mayor of Hamilton can be the leader among the Greater Toronto-Hamilton Area mayors, they can leverage the brains of McMaster University, the applied experience and leadership at Mohawk College’s Centre for Climate Change Management.

Cities are where the action is, and McKenna can make Hamilton the centre of the cities in our region.

Anyway, this was a fun idea while it lasted.  We all know Hamilton needs leadership – maybe we can hope in a year that McKenna re-enters politics? Not likely, I know.

No matter what McKenna chooses to do next, she will make a positive difference in the fight to address climate change and its impacts.

Most importantly, she has inspired young women to plan to enter political office, and paved the way for them.

One thought on “Hamilton-born Catherine McKenna Not Seeking Re-election to Parliament: Some Hamilton Thoughts”