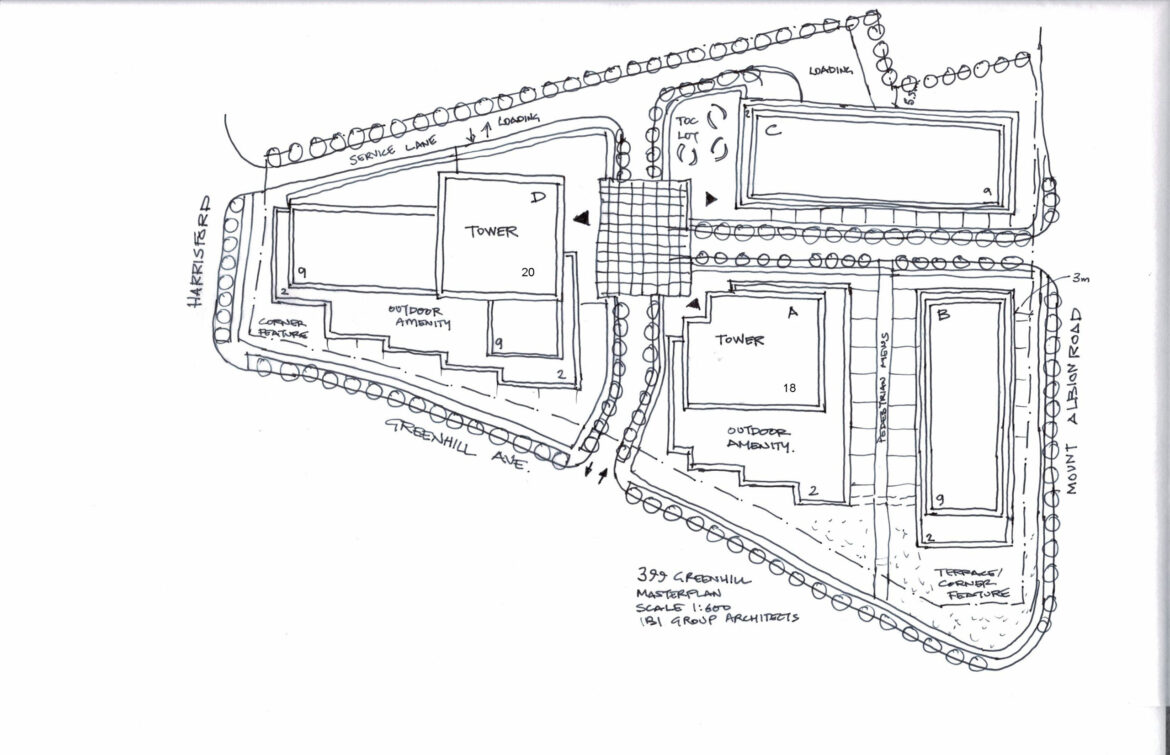 The pocket of East Hamilton tucked into the Red Hill Valley nearest to the escarpment will have two new tall buildings if Medallion Developments gains Council approval for redevelopment of Mount Albion Plaza.

Medallion submitted conceptual plans for two tall buildings to the City of Hamilton’s planning staff. One building is proposed for 20 storeys, and the other is proposed for 18-storeys. In addition, the redevelopment concept includes two more buildings at nine-storeys each.

The new buildings will have ground level commercial units.

Mount Albion Plaza, on the northwest corner of Mount Albion Road and Greenhill Avenue, is similar to many suburban style strip plazas built during the 1970s with the notable exception of the addition of offices on the second level of the plaza structure. Those offices were converted into residential units in 2010.

Presently, it includes a CIBC branch and a Shoppers Drug Mart as anchor tenants. The 20,400 square foot Foodland grocery store closed in November of 2020. It is unlikely a new grocer will operate in the space, and it is not easily adapted to other uses.

Medallion Developments, a part of the Medallion Corporation, is a significant developer with projects underway across Southern Ontario.

City of Hamilton planning staff provided initial comments to the developer in January. Hamilton’s Tall Building Guidelines will be applied to the project and it will be sent to Design Review Panel for comments.

A rezoning will require Council approval as the present “C3” zoning imposes a 14 metre height limit. The City’s growth plan calls for a maximum density of 200 units per hecture outside of the Downtown Secondary Plan.

The site proposes 504 units per hecture.

Across the street on the southeast corner of the intersection, there is a 12-storey apartment building. Directly to the south of the plaza are two 11-storey condo buildings. Further east on Greenhill Avenue is a nine-storey building.

The City will expect the developer to pay for upgrades to sewer infrastructure to address these concerns.

The site is directly beside the Greenhill Avenue access to the Red Hill Valley Parkway, highway access is sought by many renters and should enable the development to show a manageable traffic impact.

The developer met with City staff in a Formal Consultation meeting. No timelines are yet known in regards to the project. Medallion did not respond to an email request for comment.