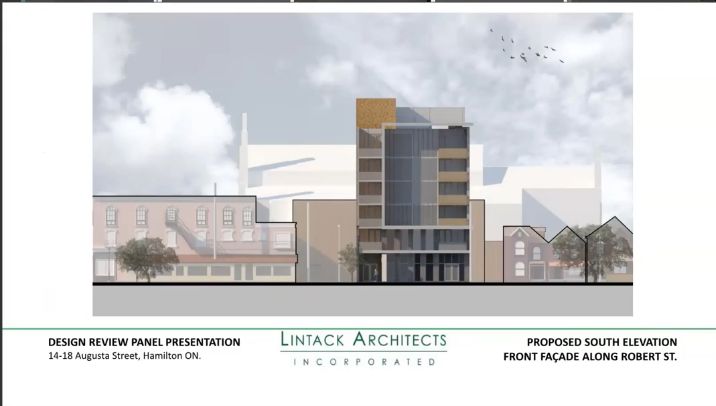 How should new developments transition between the Downtown Hamilton Secondary Plan and the “stable” single detached homes just outside of the DTSP boundary?

What about parking? When is it appropriate for smaller developments to have no parking? What about in areas where parking is very much in demand with on-street parking for single family detached homes in the Downtown?

These are some of the many questions Hamilton’s Committee of Adjustment considered Thursday before approving a planned six-storey mixed use building with 28 residents units and ground floor commercial on a slender site at 11 Robert Street. The site is directly east of James Street North.

The developer proposes to have no parking, which was the focus of concerns from neighbouring residential homeowners.

City of Hamilton planning staff recommended approval, and all but one member of the Committee of Adjustment agreed.

The owners of Academia Hall Ltd at 240-242 James Street North hired Registered Professional Planner Terrance Glover of Urban in Mind to represent their opposition to the development.

Academia is concerned about access to their rear of their building where they have parking which is access by a lane-way running alongside 11 Robert, the density of the site, and potential for noise complaints from future residents in the proposed development.

The development “will cause undo hardship on surrounding businesses and neighbours”, Glover wrote in a report submitted to the committee. “[It] does not reflect the existing neighbourhood character and heights”.

Registered Professional Planner James Webb, representing Yoke Group which owns the property, noted Hamilton’s Design Review Panel reviewed the project in 2020 and stated their support of the project as appropriate for the site.

DRP members spoke positively of the project and the choice of exterior building materials.

Two neighbours spoke to the committee to express opposition based upon the parking situation in the area and that the proposal is over-intensification of the site.

City of Hamilton planning staff state the site should’ve been included in the DTSP zoning but a mapping error means it is not. Shannon McKie, Senior Project Manager for the urban planning section, states staff plan to bring forth a “housekeeping amendment” to bring it into the DTSP zoning.

A “housekeeping amendment” would be subject to appeal to the Local Planning Appeal Tribunal.

The site remains under the city-wide “Community Shopping and Commercial, Etc. (H)” zone. This zoning permits up to 4-storeys in certain circumstances.

If the site were in the DTSP, up to six storeys be permitted. However, due to the space constraints of the site, many of the issues of abutment would remains.

On parking, McKie explained the DTSP grants parking exceptions based on unit sizes.
There is no parking requirement for one-bedroom units under 50 square metres, the first 12 one-bedrrom units, and to incentive three or greater bedroom units the first 12 are exempt as well. 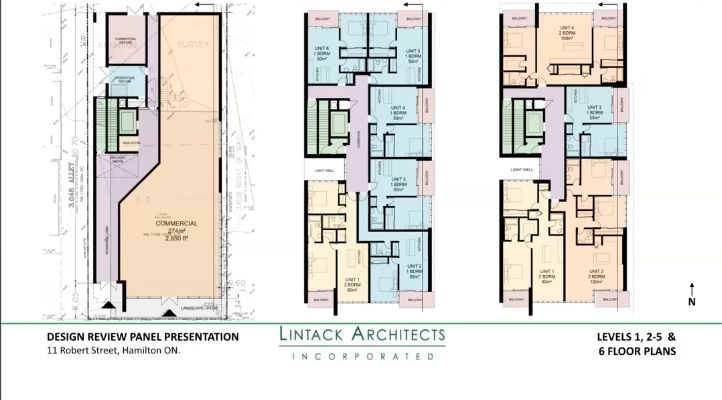 “The mixture of units that are being provided in the building results in a zero requirement”, McKie stated. “The parking regulations were established to try and incentivize a different unit mixology in residential developments. To have a mixture of one, two and three bedroom units.”

Clayton Payer, architect for the project from Lintack Architects Inc, stated at Design Review the building will be rental units and retained by Yoke Group. “They are going to retain it. It’s not going to be condos, it will be apartments.”

Academia Hall Ltd indicated they plan to appeal the decision to the Local Planning Appeal Tribunal.

One thought on “City Approves New Six-Storey Development at 11 Robert, but Appeals are Likely”