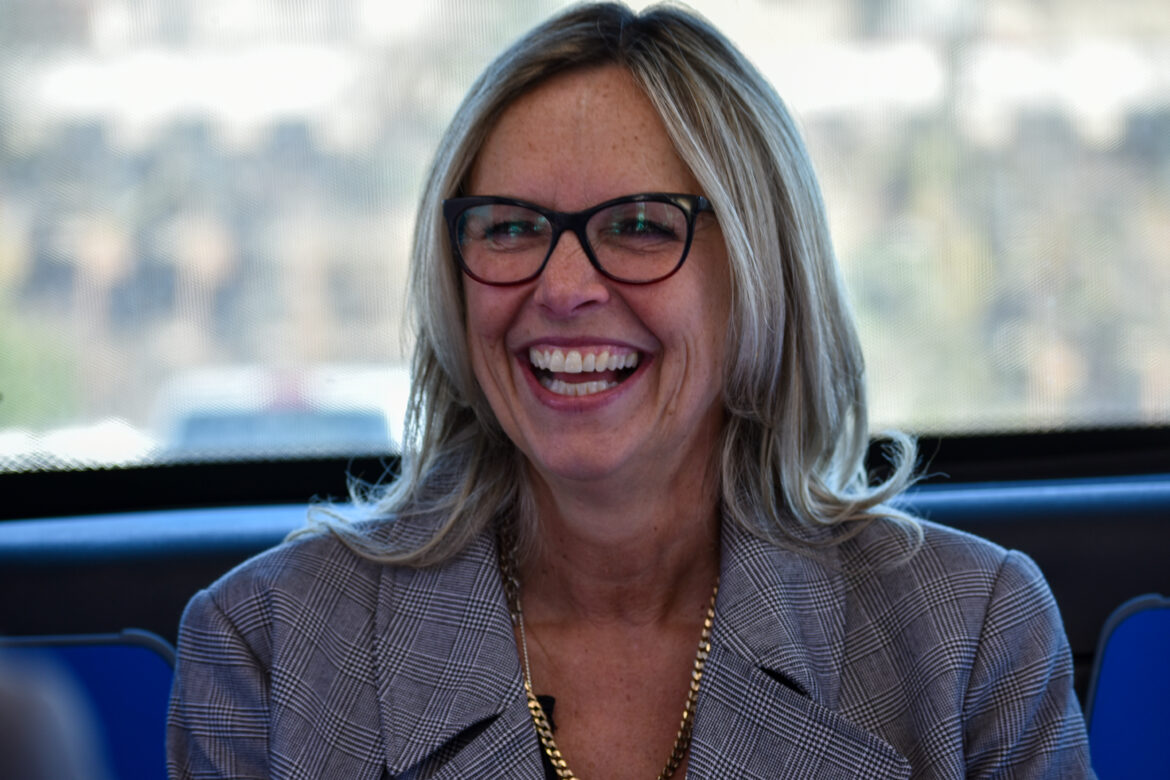 Hamilton Director Debbie Dalle Dedove during a test ride of an electric bus in April 2019.

After nearly five years, Debbie Dalle Vedove’s last day in the HSR office will be June 30, 2021.

As the head of the Hamilton Street Railway, Dalle Vedove restructured the HSR, responded to the 2017 Transit Crisis with decisive action, implemented modest public transit improvements, and avoid scandals all while navigating the treachery of the HSR politics and Hamilton City Hall.

She will be remembered for establishing stability and rerailing the HSR towards renewal after decades of decline.

Dalle Vedove brought diplomatic skills second to none and a strategic vision many of us could not see.

The Most Difficult First Year and Final Year

It is an understatement to describe Dalle Vedove’s first year as difficult. It ended with the union representing HSR employees calling on City Council to fire Dalle Vedove.

Only days prior, The Public Record used a Freedom of Information request to reveal the HSR was not operating up to 10% of scheduled service on most days.

It seemed the HSR was derailing before everyone’s eyes. Transit riders were scrambling to find other means of getting to work. Staff morale plummeted, retirements increased, and Dalle Vedove changes to operational management seemed ill conceived in the middle of the crisis.

Here is how I described August 18, 2017: “Last Friday, the HSR failed to put at least 15 buses on the road. Riders looking to get the Ticats game dealt with buses not showing up, and other bus routes saw hour long service gaps as HSR managers failed to communicate and address the situation.”

Dalle Vedove was ready, as soon as City Hall could no longer deny the crisis, Dalle Vedove stood in front of Council with a plan to quickly hire needed operators while increasing available overtime to meet scheduled service standards. 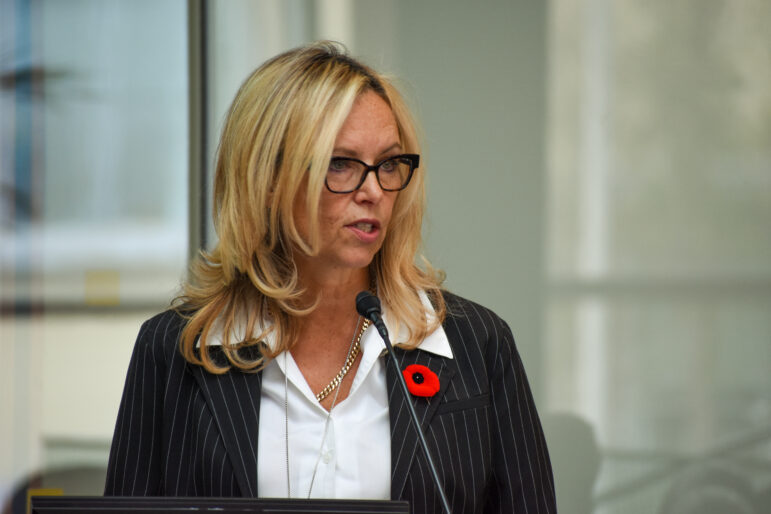 2020 brought COVID. HSR employees cannot work from home. They must drive, clean and repair buses. Ticket clerks and supervisors must interact with the public.

Dalle Vedove empowered her staff to quickly implement solutions quickly in the early days of COVID.

The shields separating the operator compartment on buses are a made in Hamilton solution. They are manufactured in Ancaster and installed by HSR staff at the Mountain Garage.

As of Friday, nearly a year into the pandemic, only four HSR employees have tested positive for COVID. None of the cases have been tied to the workplace.

Dalle Vedove publicly credits HSR staff for the successes of the past year.

Reversing the Decline of the HSR

She brought stability to the HSR, ensuring it will not return to the decades of decline it experienced between 1994 and 2014.

In 2014, following a sexual harassment scandal which a labour arbitrator described as one of the worst cases of mismanagement they had ever seen, City Council was forced to remove HSR Director Don Hull.

(City Council promoted Hull out of the Director position to a nearly created role in City Manager’s Office at the request of then City Manager Chris Murray.)

Hull was replaced by David Dixon who surprised everyone by being a strong advocate for public transit.

Dixon angered City Hall by stating the HSR needed to be improved as a prerequisite to implementing Light Rail Transit. Dixon pushed for a revival of the HSR which Council would not support. The Ten-Year Transit Strategy was brought forth as compromise.

As Dixon famously stated Council “unanimously supported it, with the exception of the funding”. After 21 months as HSR Director, Dixon left to work on the Eglinton LRT in Toronto.

She inherited a demoralized workforce, an organizational structure which was dysfunctional at the best of times, and a City Hall which sees public transit as a burden.

Changing the management structure of the HSR in her first year was no small feat. With this changes came a few slogan “HSR, Your First Choice”.

It remains aspirational, and Dalle Vedove leaves the HSR on track to achieve this goal.

Planning is well underway for a future revamp of the HSR, the (Re)envision exercise.

Data collection practices implemented during the past five years means the HSR actually knows what is happening on the road, how people are travelling, and where Hamilton’s greatest transit needs actually are.

The pandemic means the (Re)envision campaign is delayed. Officially, major route changes are now expected in Fall 2022. The politics of Hamilton City Council combined with 2022 being the municipal election year means we should expect a delay until 2023.

This is the mastery of Dalle Vedove’s time leading the HSR. She laid a strong foundation for better transit while respecting the primacy of Council in setting transit policy. 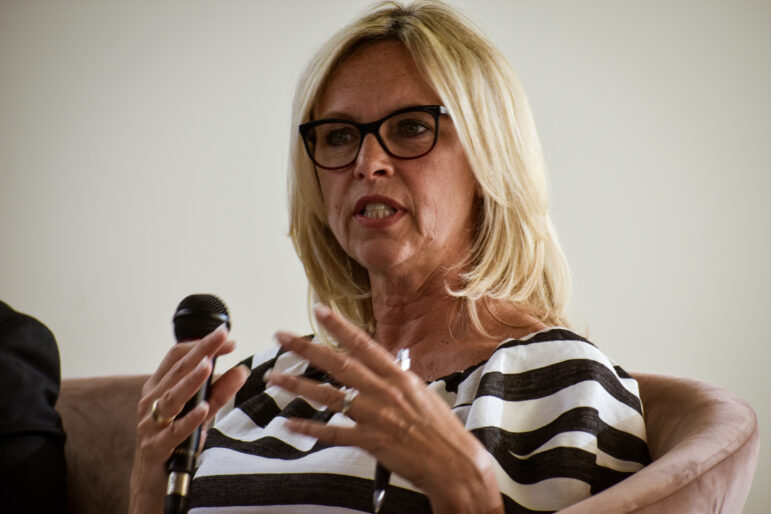 Dalle Vedove significantly improved the reputation of the HSR within the transit sector and built the capacity of internal managers to take on the role of HSR Director.

The competition for the next HSR Director will attract many great candidates thanks to Dalle Vedove’s efforts.

Started as a Bus Operator, Climbed the Ranks as a Woman

Dalle Vedove began her career as a bus operator for the Toronto Transit Commission and worked up the ranks of the TTC.

“I drove trolley buses, regular buses, I drove subway streetcar, everything that had a wheel on it”, she stated in a 2019 podcast with transit vendor Trapeze Group.

She discussed her steady climb in the ranks of the TTC where she was a supervisor, divisional management, and finally human resources. She moved to Oakville Transit as Operations Manager and eventually the Director of Oakville Transit.

“It was always my dream job to be the head of a transit agency so that I could make a difference”, Dalle Vedove stated in the podcast describing why she moved to Hamilton.

As a woman in transit, and one of the first to climb the management ranks, Dalle Vedove encountered harassment and toxic behaviour. In 2001, while an Assistant Superintendent in the TTC’s Arrow Road Division, a bus operator wrote extremely offensive graffiti regarding Dalle Vedove in a washroom stall.

Dalle Vedove entered the HSR at a time when women were still unrepresented in the management or supervision ranks. In 2013, there was only one women among the fourteen inspectors (who assist the on-duty supervisor but are not considered supervisors), and this woman was subjected to a campaign of sexual harassment which an arbitrator found was enabled by rampant mismanagement at the HSR.

There are now women at all levels of the HSR.

“I have seen firsthand the many challenges that females have historically faced in this traditionally male dominated industry”, writes ATU 107 President Eric Tuck. “Director Vedove has been a true trail blazer who has broken thru that proverbial ceiling.”

Rebuilding Morale at the HSR 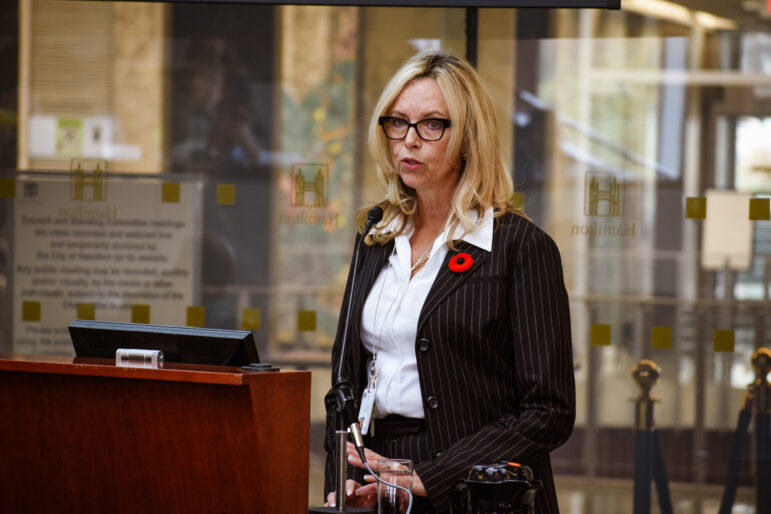 In the photo above, while presenting to Council, she can be seen wearing her HSR employee ID card. HSR employees are required to have their cards visible while working inside HSR buildings.

Dalle Vedove led at the wheel, both figuratively and literally.

She maintained her Class ‘B’ drivers license. At the lowest point of HSR morale in Fall 2017, having heard that evening operators felt forgotten by management, Dalle Vedove took the wheel of the last bus on the road – the “drop-off bus”. Departing the HSR garage around 2:30am in the morning took over a dozen bus operators home.

This night earned Dalle Vedove great respect among HSR’s front line staff. She heard first-hand concerns of operators. She remained at the HSR Mountain garage for the start of the next day’s operations, meaning the earliest morning operators. (She also drove the “pick-up” bus)

Over the past few years, operators have shared stories of Dalle Vedove reaching out to them with praise, and with offers of support during times of bereavement and personal challenges.

In media interviews and at public events, Dalle Vedove spoke firmly of the need for and value of public transit.

She consistently moved the political goal posts in Hamilton, and wisely avoided the minefield of Light Rail Transit. Her comments on LRT primarily focused upon the HSR (Re)envision campaign with repeated statements that her goal was to build a HSR ready to make LRT successful for riders.

An Example for the Future

Upon arriving in 2016, Dalle Vedove became the highest profile women working at the City of Hamilton. To say she faced the glass cliff be an understatement.

The HSR had never had a woman in charge, only recently having a single woman in mid-management, and this was a time when there were no women in the senior management ranks of the City of Hamilton.

She set an example for the hundreds of women climbing the ladder at a time when the top ranks of Hamilton City Hall, and Hamilton City Council, remain an old boys’ network.

Hamilton is truly fortunate she led the HSR at such a critical time, and we are better for her service.