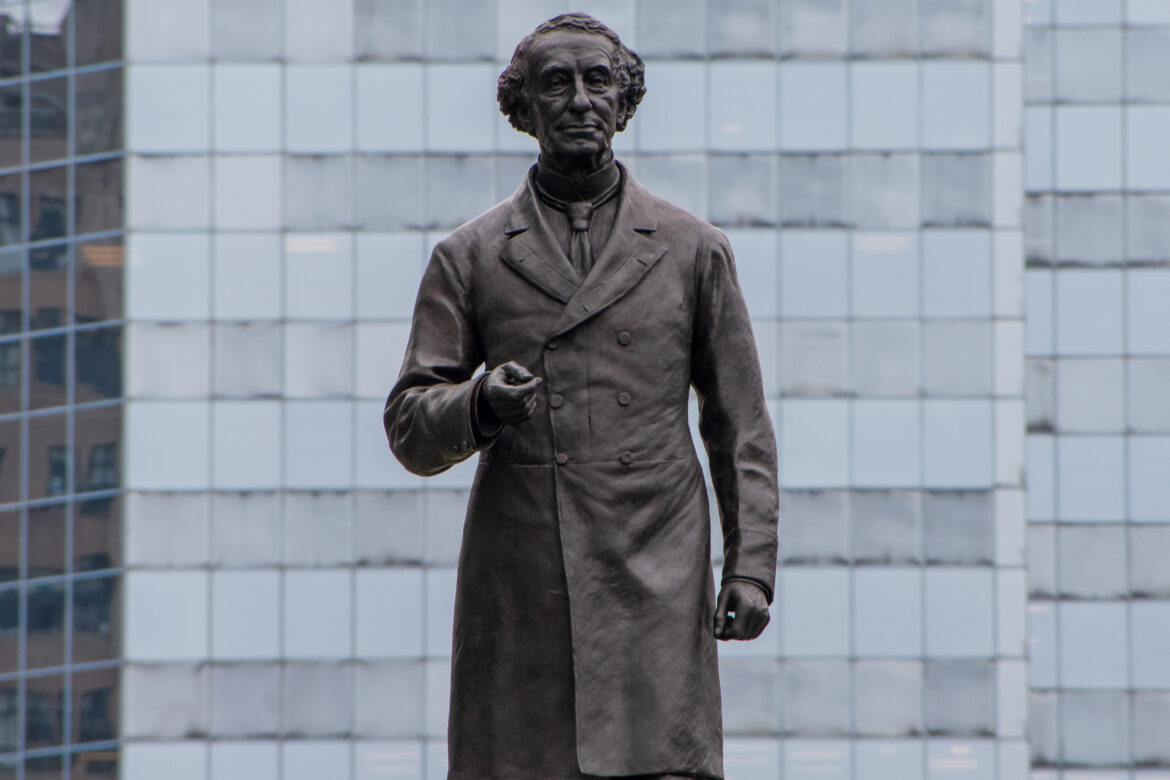 City staff are “seriously” considering recommending the removal of a statue of Canada’s first Prime Minister Sir John A. Macdonald from its present perch downtown in Gore Park.

This statue of Macdonald was the first erected in the Dominion of Canada (as it was commonly called at the time), only two years after Macdonald’s death.

The Hamilton Public Library’s local history department details the history of the statute.

Hamilton’s Board of Trade purchased the bronze statue of Macdonald shortly after his death in 1891. Measuring eight feet and three inches in height, the statue arrived in Hamilton on October 30, 1893 from London, England.

“The statue was immediately placed upon a pedestal of gray New Brunswick granite that stood eleven feet high and was located in the intersection of King and Hughson streets, facing west”, states the HPL’s history.

“The statue was then covered by bunting in preparation for the official dedication which was scheduled for November 1, 1893”.

Canada’s Prime Minister Sir John Thompson attended the dedication ceremony with “over twenty thousand onlookers were in attendance for the unveiling”.

The removal of the statue “is our high priority item” says the City of Hamilton’s Project Manager for Indigenous Initiatives Nicole Jones.

City Manager Janette Smith will bring forth a report to Council early in 2021 seeking Council’s decision on the future of the statue.

Jones says many members of Hamilton’s Indigenous communities have expressed to the City the pain the statue causes them as a reminder of Canada’s racist and colonial policies against Indigenous peoples.

During consultations, Jones says people shared they “feel angry constantly seeing these colonial structures and statues that enforced assimilation upon our people”.

“It is disheartening”, says Hamilton Aboriginal Advisory Committee member Laura Workman that it has taken this long to have the discussion of removing the statue.

“At least for future generations of our people they, hopefully, if this statue does get removed … will not have to walk Downtown and not see that constant reminder all the time”.

“There is still hope that the little faces coming through now will not have to bear that burden”, Workman adds.

“When the TRC [Truth and Reconciliation Commission of Canada report] came out, that was the time for them [City Council] to do something”, says committee member Cat Cayuga. “It needs to come down, it definitely needs to come down”, Cayuga says.

Cayuga says carding and racism impacts Indigenous communities and the City needs to do more to address issues. “The City should not have waited this long”.

“The Sir John A. Macdonald statue remains a significant part of Hamilton history and culture and is appreciated by the citizens and city council of Hamilton”, states the Hamilton Public Library’s local history department.

The yearly gathering of Hamilton’s Sir John A. MacDonald at the statue to celebrate the birthday of MacDonald was raised as a concern during consultations with Hamilton’s Indigenous communities, Jones says.

The statue has become a place of protest in recent years.

In 2015, the members of the Indigenous communities and supporters held a protest of the statue on the 200th anniversary of MacDonald’s birth. More recently, on October 9, Land Back supporters held an information picket at the statue. 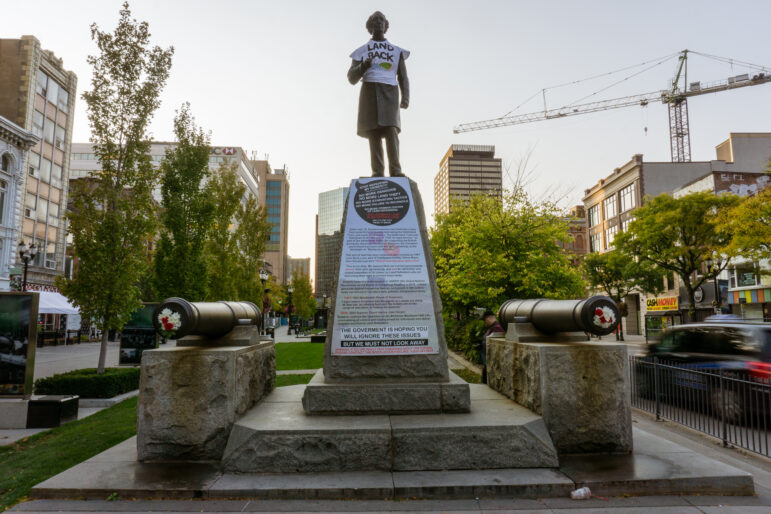 On November 9, the statue was covered in red paint.

The Legacy of Macdonald and Reviewing Landmarks

The City’s Indigenous strategy office says planning is underway to help Hamiltonians better understand the complex legacy of MacDonald and Canada’s past.

Other local landmarks are being reviewed, with a focus upon including Hamilton’s Indigenous history in contemporary places and commemorations.

Further public consultations on this part of Hamilton’s response to the Truth and Reconciliation Commission will occur in 2021.

“This is our first beginning initial step”, says Jones. “We are looking for consultation on not just Sir John A MacDonald but other Indigenous landmarks as well”.