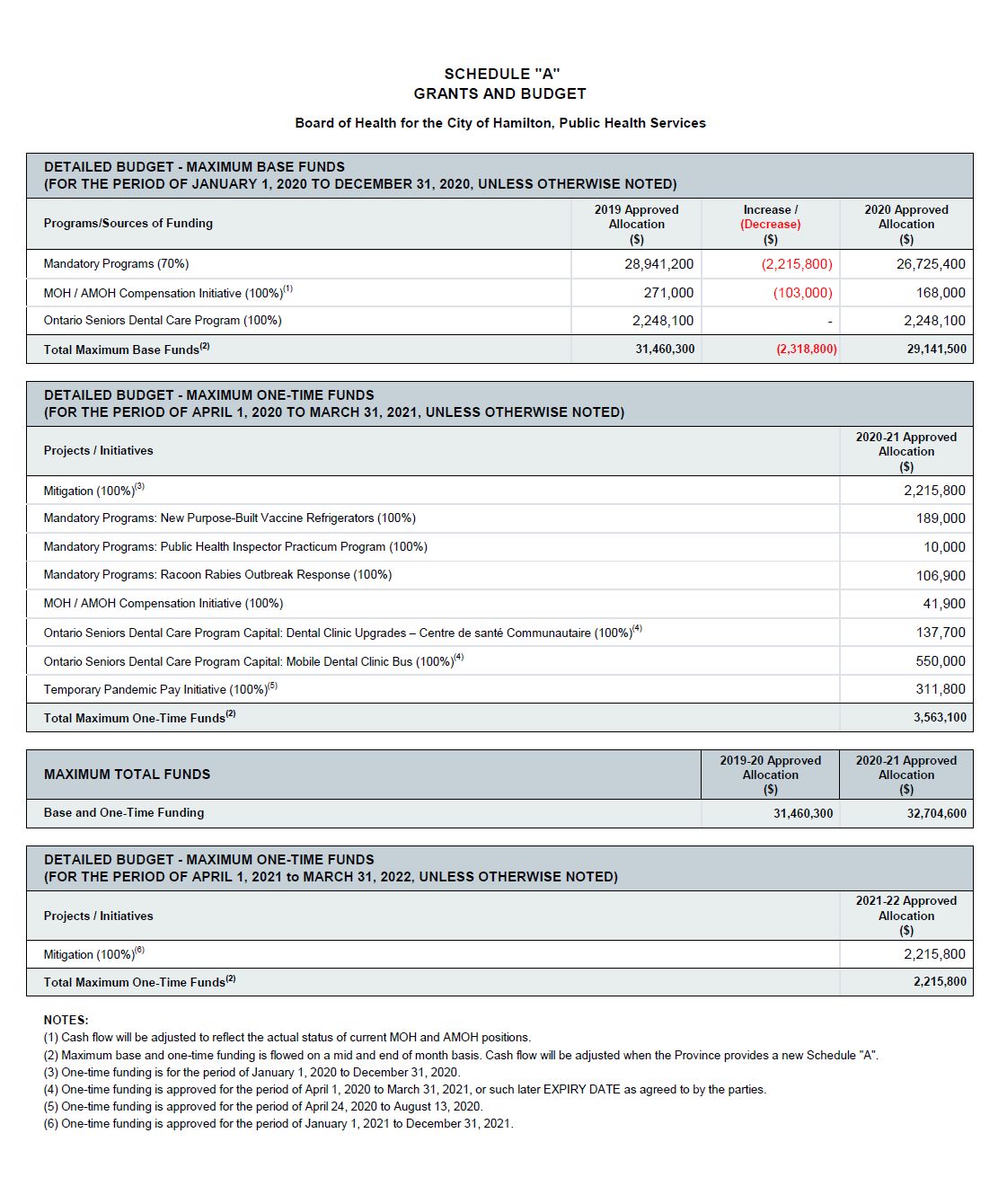 Premier Doug Ford’s Conservative government is adjusting the base funding of Hamilton’s Public Health Unit to reflect planned base funding cuts announced last year, with a offset of “one-time funds” for the next two years which have the effect of delaying the cuts until 2022.
The planned cuts were announced in 2019. Local Member of Provincial Parliament Donna Skelly (Flamborough-Glanbrook) supported the planned cuts to provincial public health funding.
In a letter to Hamilton’s Medical Officer of Health on August 21, the Ontario Ministry of Health states Hamilton’s base funding is being cut by $2,318,000 this year, from $31,460,330 in 2019 to $29,141,500 for 2020.
The Province is providing one-time funding to “mitigate” the cuts for 2020, and giving Hamilton some one-fund grants for capital expenses and pandemic pay. The “one-time funds” mean the cuts are now scheduled to take effect in 2022.
Christine Elliott, Deputy Premier and Minister of Health, wrote Mayor Fred Eisenberger to state she is “pleased” to provide one-time funding because “Ontario recognizes the considerable time and resources necessary for public health units to continue to effectively respond to COVID-19”
“This funding ensures that municipalities do not experience any increase as a result of the cost-sharing change.”
The “cost-sharing” change Minister Elliott refers to is the shift of public health costs onto municipalities as part of the delayed provincial funds. Prior to the planned cuts, the Province of Ontario paid 75% of the Hamilton Public Health Unit’s base costs. 25% of the base costs was paid by the City of Hamilton.
The 2020 City of Hamilton budget included a $1.1-million cost increase in Public Health budgeting for the planned cuts. The Province is continuing to implement other cuts, which the City states cost $1.2-million in addition to the public health costs.
For 2020, With one-time funding for capital and a top-up for the Pandemic Pay Initiative, Hamilton’s Public Health unit is receiving $32,704,600 in base funding from the Province – an increase of $1,244,300 over last year.
Separately, the Province will be allocating additional funds to the City of Hamilton for COVID-19 public health response costs. The Minister of Health writes they are initiating the process for local public health units to “request reimbursement of one-time extraordinary costs incurred in managing the response to COVID-19”.
Hamilton Medical Officer of Health Dr. Elizabeth Richardson is expected to speak about the funding cuts on Monday during the Hamilton Board of Health meeting. The meeting is scheduled to begin at 9:30am on Monday, September 21, and will be livestreamed on YouTube.