Hamilton City Council deferred a decision on a request for a 75% rent deduction for vendors in the Hamilton Farmers’ Market.
Council will make a decision at a future date, possibly next Wednesday, September 23rd.
The proposed discount is similar to the Canada Emergency Commercial Rent Assistance program. CECRA provides 50% of rent to commercial landlords, with the landlord expected to forgive 25% of rent, and businesses paying 25% of their usual rent.
The cost of providing rent relief, for April to August, is estimated to be $150,000.
Four vendors have left since COVID began, with many more expressing concerns about their ability to continue due to significantly reduced sales.
Prior to COVID, 45 percent of Market customers arrive via the Jackson Square entrance.
It is not known what percentage of the Market’s customers are people who work downtown. Hamilton’s downtown office buildings are mostly vacant. The City of Hamilton is the largest employer downtown, and its staff will continue working from home until at least January 2021.
The City of Hamilton is the landlord of the Farmers’ Market, and as a municipal government is ineligible for the federal program. The Farmers’ Market, while a municipal corporation, does not have ownership of the market building.
Ward 9 Councillor Brad Clark asked if the City can include this cost in its pending request to the Province for COVID costs reimbursements. Staff stated they will explore this.
Ward 15 City Councillor Judi Partridge asked if granting relief at the Farmers’ Market opens the City up to a “tsunami of requests”.
City staff state they will bring forth a report on September 23rd. The City has received relief requests from other tenants of the City’s real estate operations, and this would be cited by them in their requests.
Partridge expressed concerned about the “fairness” of this request, citing that the City is not providing property tax relief to commercial ratepayers.
Ward 2 Councillor Jason Farr began his questions by asking if the doors between the Market and Jackson Square have reopened. The Market is located in the centre of Ward 2. The doors have been open since early July.
Farr continued his questions, asking if Market vendors had received the Canadian Emergency Relief Benefit. CERB is an individual income support program. Small business owners qualify for CERB if their businesses are unable to pay them an income of more than $1000 per month. Many businesses, such as Farmers’ Market restaurants, have lost all their revenue sources. These businesses are still being billed rent by the City of Hamilton for their market stalls.
Staff responded to Farr that it is not known how many market stall holders qualified and took the assistance program. In any event, this be personal information not available to the City.
Ward 7 Councillor Esther Pauls, who sits on the Market Board as the City Council representative, expressed her support for a rent reduction. Pauls asked how many vendors applied for various government COVID commerical loan programs. Staff and the Market Board Chair do not know the number, and there is no requirement for businesses to disclose this information.
At one point during the meeting, Partridge waved what she described as a “damning report” on Market governance. The report, which is not yet public, was provided to some members of City Council a month ago, Partridge said. 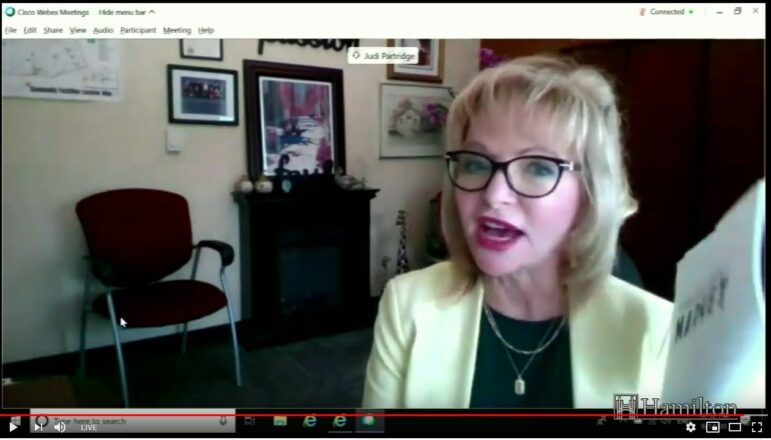 The Legislative Assistance managing today’s Council meeting stated it had not been provided to her prior to the meeting. It is not clear who had the report, and how it reached some Councillors. The Farmers’ Market is the responsibility of the Office of the City Manager (CMO). The Director of Strategic Partnership position is presently vacant.
Matthew Grant, Director of Communications & Intergovernment Relations, states the CMO is working to release the report. “We’d like to ensure you and other members of the press have a copy”, Grant wrote.
Council spent just over an hour in closed session debating the rent relief request before emerging to announce the deferral of decision to a later date.
The Public Record took a copy of the meeting video and it is available on our YouTube page.