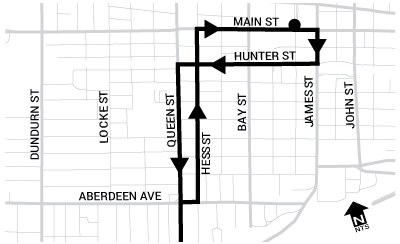 The Hamilton Street Railway is shortening the 34-Upper Paradise route to address serious problems of scheduling on the increasingly busy bus route.
The Upper Paradise is experiencing increasing passenger loads from the Rolston neighbourhood, new development on the South Mountain, and an increase in the number of Redeemer University students living downtown.
The Upper Paradise bus only operates once per hour to Rymal Road during weekdays, with every 30 minute service only during rush hour. The bus route splits at Stone Church, with the only every other bus operating to Upper Horning Loop.
HSR communications manager Amanda Kinnard says the reason for the re-routing is lower speed limits along residential streets the bus route operates on.
“This route has been impacted by a number of speed calming initiatives over recent years and buses are no longer able to remain on schedule,” Kinnard wrote in a April 9 statement.
To maintain the present routing, the HSR would have to add a bus to the route.
Instead, the HSR is shortening the route by removing service from King Street, and having the bus turn south from Main Street at James Street.
This will cut around five minutes from the drive time of the route.
This is not a rider-centric change, quite the opposite. Many riders will be inconvenienced, and will need to leave earlier to connect to the Upper Paradise bus.
Take, as our example, a Redeemer University student living in West Hamilton. Prior to the route shortening, they could quickly transfer at Queen Street South and Main Street West.
Now, Kinnard writes “Connections from east-bound buses on Main to southbound buses going up the Mountain will now be made at Main/MacNab”.
This adds 15 to 20 minutes to these students’ commute.
The Upper Paradise bus should be servicing Redeemer University College, but due to the veto of Ward 12 City Councillor Lloyd Ferguson, it does not.
In March, Mayor Fred Eisenberger decided to withdraw his motion to end the Transit Area Rating policy which allows ward councillors to veto transit service in their areas. Thus, another year in which Redeemer University remains serviced only once every thirty minutes by a single bus route, the 44-Rymal, and travel from Downtown to Redeemer remains inconvenient for HSR riders.
Had the Upper Paradise route been redesigned with a passengers’ first lenses, all Upper Paradise buses would go to Redeemer University College, the service would every 30 minutes, there would be at least three buses assigned to the route, and the routing downtown would remain the same.
The fault for the HSR once again failing to meet the expectations it set with its slogan “HSR, Your First Choice” is entirely at the feet of Mayor Fred Eisenberger, and his continuing failure to lead on transit.