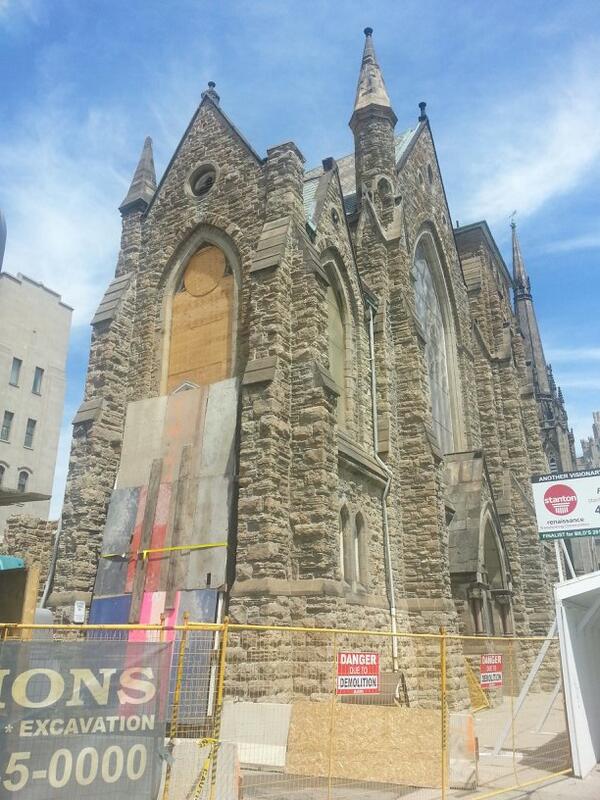 The retained front facade of the James Baptist Church from a 2015 Raise The Hammer file photo.

I wrote a news piece about yesterday’s Heritage Permit Review Sub-Committee hearing into the revived proposal for The Connelly tall building development on the former site of the James Baptist Church at 98 James Street South.
This is a companion Editor’s Note to share some of my thoughts which are opinion, whereas the article is a straight news piece.

Much of the Sub-Committee discussion focused upon concerns that the Hamilton tradition of demolition by neglect will occur to the remaining facade of the former James Baptist Church.
The traditional script of how this works in Hamilton was followed when Ward 2 City Councillor Jason Farr championed Louie Santaguida’s Stanton Renaissance, and City Hall’s used of a “minor alteration” loophole to demolish the James Baptist Church without public hearing or scrutiny.
Not surprisingly, despite Farr’s repeated promises that everything was fine, Santaguida’s Stanton Renaissance went bankrupt, leaving the front facade’s future subject to reasonable doubt.
Now, only a few weeks after taking ownership, the new owners are engaged in their due diligence which includes a structural engineering report on the current state of the front facade.
While there’s nothing to indicate any problems, the history of Hamilton means Hamiltonians are rightfully skeptical.
Uniquely, in this case, a demolition by neglect or loss of the remaining front facade would be very costly for the developer. It costs millions to get a development to construction – design, planning applications, marketing & communications, engineers, consultants, financing, lawyers, and more add up. The saying “time is money” is particularly true in the development industry, these upfront costs are usually financed by borrowing – each month of delay getting to construction is costly.
The current project – pending a minor variance application and approval at the Committee of Adjustment – is quite literally “shovel ready”.
They can be in the ground in 2019, especially if Hue Development is able to quickly sell units to previous buyers and tap into demand for the type of condos they are selling; especially demand for condos that will be quickly built.
The loss of the front facade will effectively void existing development approvals from City Council, and restart the entire planning process, costing Hue Development at last a full year, if not more in delay. This loss would easily be into the hundreds of thousands of dollars.
That isn’t even calculating the marketing momentum costs.
Buying the 98 James Street South property out of bankruptcy was costly on a per-hectare basis; the only reason the heightened cost is a good business case is the new owners inherited the planning approvals and development planning work which the previous owner completed. (The previous owner having leverage this work to gain access to credit)
Even if the developer were able to expand the future tall building to cover the approximately eight metre width of the facade, that would not represent enough new square footage to justify the delay costs which will be incurred.

City Hall Will Defend the Facade

The tone of Hamilton’s Director of Planning and Chief Planner Steve Robichaud at yesterday’s meeting convened that he’s not going to accept anything less than restoration and inclusion of the front facade into the new development. He was clear that City Hall planning staff will uphold the “minor alteration” agreement.
Robichaud did state that the Building Code does allow for the City’s Chief Building Official to allow for an emergency demolition in the event the facade is structurally unsound to the point of posing a threat to public safety. Robichaud had to provide that information, but in the context of his overall answers, it was clear that City staff do not want this outcome.
Hue Developments has hired good consultants, I’m not expecting we’re going to see the Hamilton tradition of demolition by neglect repeated here. (see two sections below)

LCH Developments have a record of building projects in the Greater Toronto and Hamilton Area. Hue Developments is a local group, they were able to finance the purchase of the property, and hire good consultants.
The project had seven or eight staff at last night’s hearing; all of whom appeared to know what they were doing, taking lots of notes during sub-committee comments.

Hue Developments is the developer, LCH Developments is the project manager. During the presentation, LCH was placed alongside Hue as more of a partnership.
mcCallumSather remain as architects.
Quinn Dressel are the structural engineers.
Adesso Design Inc. is landscape architect.
kg & a are the communications strategy firm.
One can judge a developer by the consultants they hire, both because it’s an indication of how thoughtful the developer is and what they are willing to invest in their project, but also because good firms don’t take bad clients.
These are good consultants.

As for the proposed massing and design, what appears to be proposed is a expansion of the floor plates to the balcony exterior of the former design. We’ll see how the detailed renders in the new design appear.
There were no red flags in what was shown to the Sub-Committee.

Final Thoughts on the History of the Site

Considering the history of how this file was handled by Ward 2 City Councillor Jason Farr, the guarded skepticism expressed by the Heritage Permit Review Sub-Committee is full justified.
If we remove this history from the file, and look at the new developers and the proposal, there be a lot of excitement for this project.
I dare say that we should give the modified proposal the proper scrutiny due any major planning application; and nothing more. The past is just that now, the past.