I wasn’t going to write on urban chickens but it provides a good reason to share my surprise that backyard chicken rental companies are a thing. In Saskatoon, Rent The Chicken is expanding despite urban chickens being banned.
In Hamilton, urban chickens were back on the Council agenda with a downtown resident delegating in favour of them. The delegation by Christina Sousa at yesterday’s Planning Committee was interesting, both because it reopened the file, but also because she both excelled at points in her presentation, but unfortunately went too far in trying to claim benefits from urban chickens that do not or barely exist.
It was her claims that urban chickens would assist in decreasing the tick population – citing that Hamilton is now an area of risk for Lyme Disease, and minimizing the cons related to potential health issues from urban chickens, which undermined an otherwise excellent delegation.
Councillor Robert Pasuta, who is a farmer and has chickens, corrected her claims about ticks, explaining that cut urban grass is not an environment for ticks and that the hens would have no ticks to eat; Sousa argued with Pasuta “I’m just saying if ticks happen to be in your backyard, they would eat them, they eat any grub, bug, insect”.
Pasuta shared his experiences and concerns, Sousa tried to counter them. At no point did she concede a point to Pasuta, and what followed for Sousa was a series of very tough questions from other Councillors as Pasuta’s skepticism provided them cover to be just as skeptical. 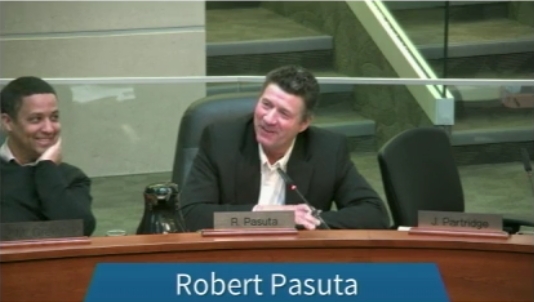 Pasuta’s reaction to Sousa’s dismissal of his points on environments for ticks, capture from City of Hamilton video stream

A key point in delegating (and a lesson many of us have learned the hard way) – know what you don’t know.
Had Sousa kept her presentation to the proven hard facts about successful urban chicken policies in other municipalities, not grasped at Lyme Disease and ticks, and simply acknowledged Pasuta cons to her pros, the delegation would’ve been more effective and the vote may have ended in her favour.
In the end, Sousa’s desire to have committee vote to re-study the urban chickens issue failed on a 5-4 vote. This vote will go to full Council next Wednesday for ratification, and I expect a lively Council debate on the topic.
Kevin Werner at HCN filed a report on the Council debate, it’s a good read and summary of the debate.