Yesterday, the City has released renderings proposed by the development group bidding to buy Pier 8.
In addition to the renderings, the bid teams had to submit a  mix of real and fictional stories about how various types of people will relate to the proposed spaces.
The city is not releasing the bid documents which explain the concepts.
The winning bidder will be able to purchase the lands from the City of Hamilton, and pending the outcome of an ongoing Ontario Municipal Board appeal, develop their vision for the last large parcel of developable waterfront land in the Greater Golden Horseshoe area.
While limited, the four presentations do reveal the  effort put in by some of the groups in reaching into the local community, and mayn innovative ideas for the development. Without the bid documents released to give them context, here’s a look at some of the highlights of the proposals that are publicly revealing. 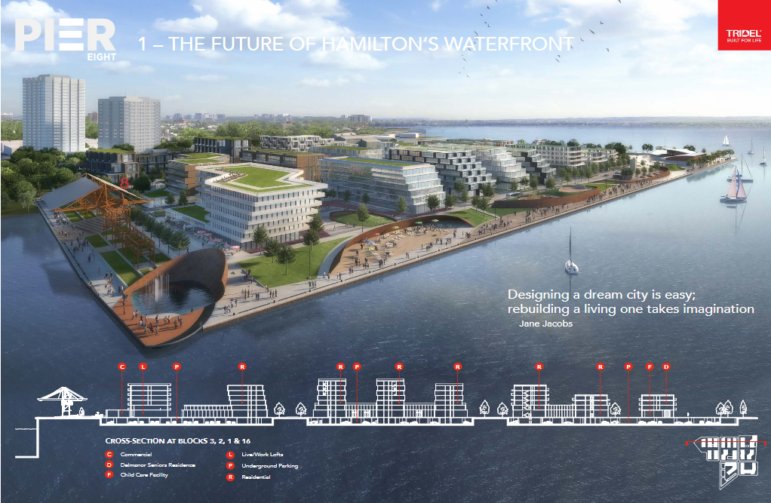 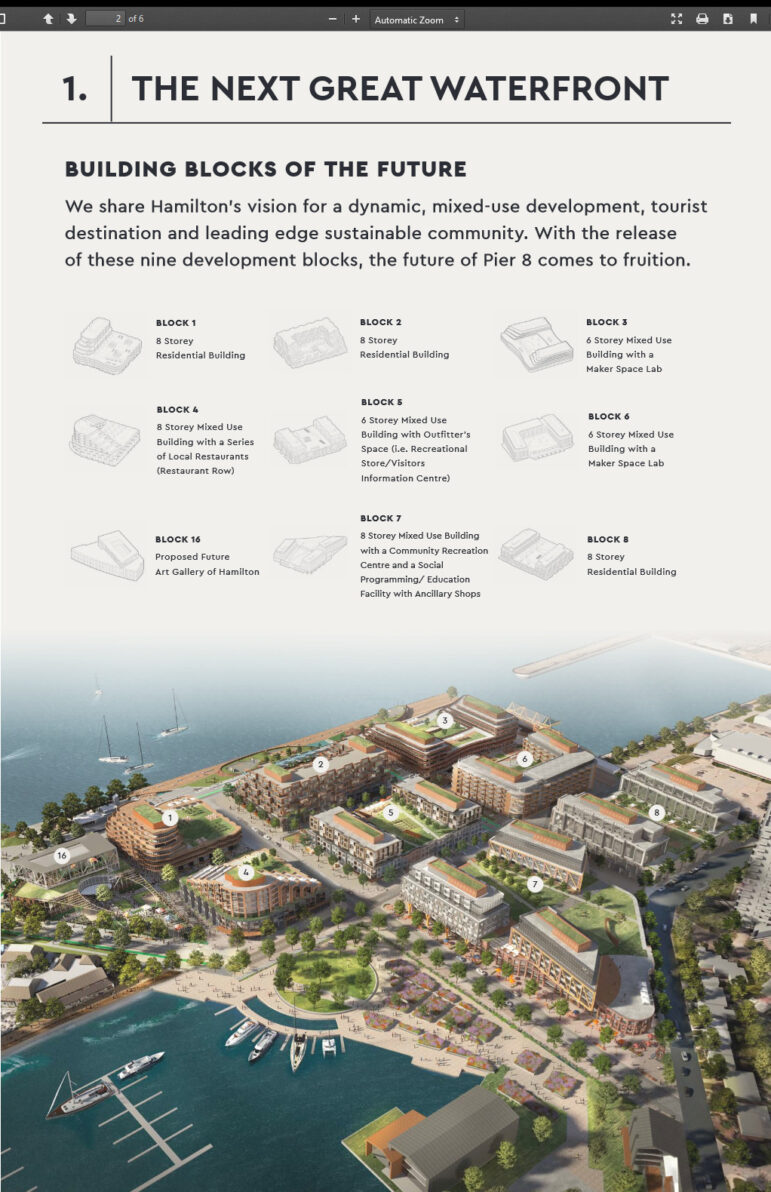 GulfDream‘s plan has three particularly interesting aspects.
They are partnering with the Art Gallery of Hamilton to move the AGH to move the gallery to the public space of Pier 8.
Local firm McCallum Sather Architects is the lead architectural firm, and is proposing wood framed building structures as part of a goal of reaching a LEED gold level certification for the entire development.
Architecturally the concepts propose some very interesting building designs and shapes, and appear to propose a variety of different woods for the construction.

The Waterfront Shores group’s presentation placards city inspiration of Hamilton’s older architecture for their choice of materials and design for Pier 8. This bid has the most renowned of all the architects, Bruce Kuwabara. Kuwabara was born in Hamilton.
Without the benefit of the City releasing the bid documents we cannot know for sure the purpose of the long slender buildings proposed on the east side of the Pier. The ongoing OMB appeal by the industrial port users is primarily about incompatibility of use between residential and loud dust producing industrial loading and unloading on the Harbour.
Do the slender buildings designed to serve has a buffer that will satisfy the industrial users in a settlement between this bidder and the industrial users if Waterfront Shores wins the bid? 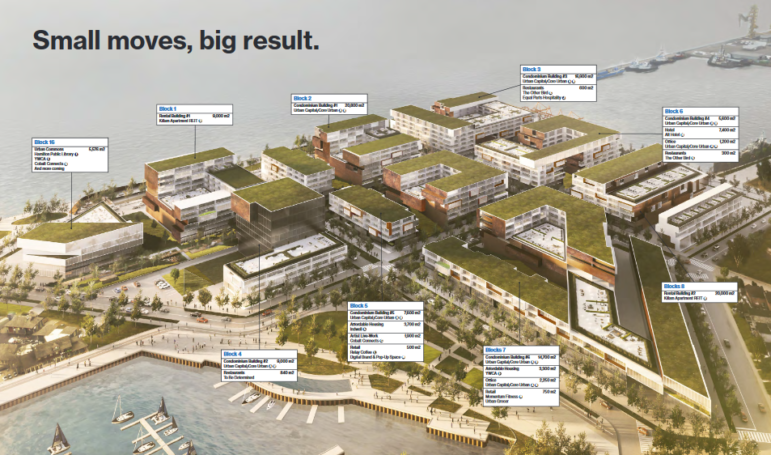 By far the most detailed public presentation slides of any of the development groups is the one that is most local.
The Urban Capital / Core Urban bid provides the most details, and is most reflective of the public feedback that is been occurring in Hamilton for the past couple years on what various community stakeholders want to see on Pier 8.
The list of partners in the bid is long and extensive, any concern this bid will be unable to bring resources to bear to complete the development are alleviated by the out-of-town partners that are part of the bid.
The Public Record previously reported on this bid’s plan to include a public library branch as part of the development, and this is confirmed in their bid presentation as part of a 5576m² “urban commons” community use building.
This bid is the only one that lays out very clearly where affordable housing will be placed within the development and who will be managing it. The YWCA of Hamilton and Indwell will be managing the affordable housing. The total space for affordable housing is 7000m², approximately 7% of the residential use on the Pier.
Following public pressure, the City added a 5% affordable housing minimum to the bid requirements. The City did not specify if this be rental or condo, and allowed for above-market rate to be considered affordable.
“You got five percent of affordable housing on Pier 8 in this RFP that we never contemplated”, Ward 2 Councillor Jason Farr stated to a group of residents opposed to the sale of the Discovery Centre. (The “right of first negotiation” to buy the Discovery Centre is part of this bid, the proposals released on Friday do not include future ideas for the Discovery Centre).
Cobalt Connects is proposing a separate 1900m² of Live/Work space, which is further affordable housing as part of the bid.
Killam Apartment REIT will be operating two buildings rental housing with approximately 400 units. A Alt Hotel of 120 is proposed to be operated by Groupe Germain on the eastern side of the Pier. Overall, 103,600m² of market residential (rental and condo) is proposed. The hotel plan is for 7400m² .
The Other Bird and Equal Parts Hospitality, two well respected local restaurant groups are part of the bid to run approximately 1000m² of restaurant space. Another 840m² of restaurant space is planned to be operated by other companies. Relay Coffee is promising to open their second stand-alone coffee shop, Momentum Fitness is planning add to their chain as part of the bid team.
Laura deCarufel, editor-in-chief of Torstar’s The Kit, plans to open a “digital brand & pop-up space” as well as launching “a new digital publishing brand” that “will celebrate Hamilton’s exciting art and culture scene”.
The Urban Capital / Core Urban bid includes vegetable gardens as part of the landscaping.
The City is inviting residents to submit their feedback on the presentation materials between now and April 17, visit the City of Hamilton website to look at the presentations and submit your comments.