The Public Record publishes a regular newsletter edition providing up-to-date news of what is happening at City Hall, a preview of upcoming news, exclusive commentary, listing of civic events, and links to interest news stories about municipal affairs and stories that better inform our civic discussion. Find our archive and sign-up here.

Brad Lamb is planning to build a series of 30 storey buildings in Downtown Hamilton, we learned from him yesterday in response to questions from Ward 2 Councillor Jason Farr during planning committee's debate on Lamb's Television City development. Lamb filed an OMB appeal against Council last week after staff recommended denying his project on Jackson Street West.

Lamb stood in front of Council's planning committee fielding a series of questions from Farr. Lamb repeatedly stated that he was hoping to reach a negotiated settlement with Farr and the community to allow him to build two towers, saying he's willing to negotiate on height.

City staff are firm the site is appropriate for one tall building of 20 to 21 storeys in height. The translation of the Escarpment height limit into storeys was new information yesterday.

Farr asked Lamb "Are you at a point where you still feel Hamilton is a great place to invest"?

This is a question a professional politician doesn't ask without already knowing the answer.

"I'm incredibly excited about this city", Lamb responded, saying that he is already looking at other development properties in Downtown Hamilton, and was in town yesterday to look at another. Lamb stated he will be bring forth more tall building applications shortly.

What does this mean? The only thing for sure is that he's planning more applications. Here's a scenario that see everyone "win": 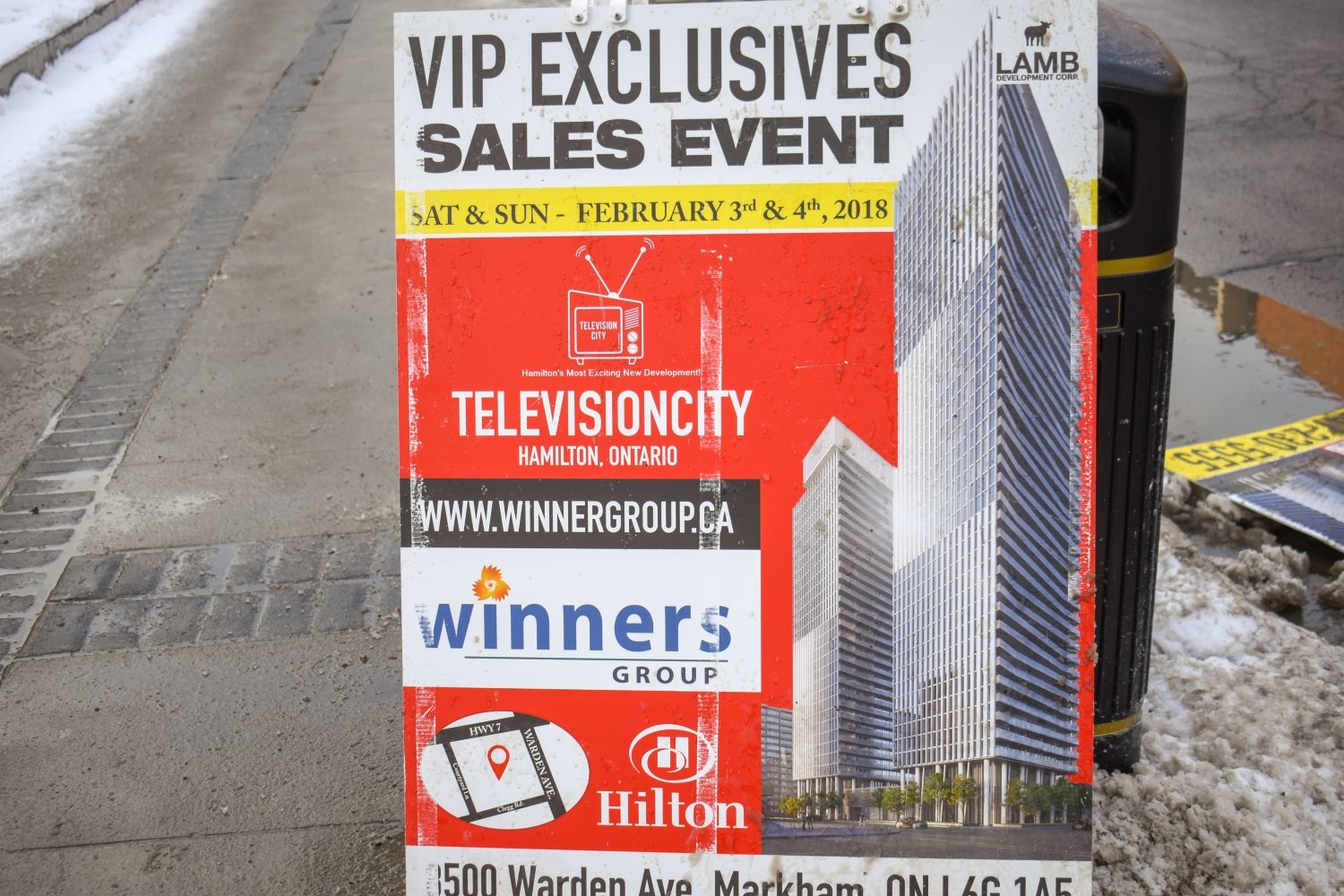 Lamb's Television City sales were marketed to investors seeking income properties; these are sales that will be mostly transferable to other Downtown Hamilton locations. The present owners of a few of the large Downtown surface parking lots have consulted with planning staff in recent months about 30 storey buildings on their sites; the Tivoli site at 108 James Street North is sitting vacant and pre-approved for 22 storeys, and the new Downtown Secondary Plan pre-zones large parts of the Downtown.

With the new Secondary Plan enabling quicker approval for conforming tall buildings: Lamb can quickly change Television City into one 21-storey premium quality live-in condo building, reach a settlement with Farr and the Durand community, transfer his investor sales into more centrally located tall buildings, and all parties can take a win. Farr wins in Durand, once the construction starts on tall buildings in Beasley, Council can create the John/Rebecca park which be a big win for Farr, and Lamb's will move forward his projects in Hamilton continuing his momentum as the GTHA's condo king.

Lamb has a track record of building, no matter how he play his cards, it's fairly safe to say we'll be looking up at more construction cranes downtown very soon.

Frank Palin is the everyday person who does good, just being a great person. You may know him as the singing HSR 51-University bus driver; I know him as the person who I admire for his humility and dedication to his family. Frank always greets his passengers with a smile; and make each one of them feel special.

Yesterday, McMaster University announced that Frank is donating all the money, $950, from a student GoFundMe thanking him for being a great person, to a student bursary fund. Frank and his wife added $350 of their own funds to thank McMaster students for the GoFundMe. (The University is hoping to raise another $1700 to make the donation a permanent bursary)

A couple of months ago, I chatted with Frank from Downtown to the campus. A student who got off the same bus as me. As we walked, they said with some excitement "Frank knows your name", forget my guest lecturing and everything else about me, Frank knowing me was the greatest honour, and it truely is.

Other students shared with me stories about Frank, one student talked about how in her first year, she took Frank's bus to Dundurn on the Friday at the  beginning of reading week. "He wished me a safe reading week. I got on his bus the Tuesday after reading week, and he asked me how my reading week was".

It's truly the small things that a difference.

For many McMaster students, HSR operators are the first off-campus Hamiltonians they meet, the first impression of our wider community. We're lucky to have Frank as our representative.