Today, I joined the Hamilton and District Labour Council’s Stand Against Hate, I wrote yesterday about why I believed doing so was the right thing to do as a community leader.
The following are my observations. 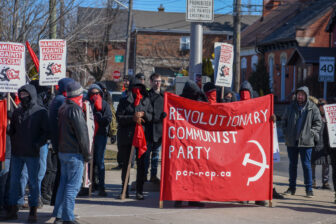 I arrived at Locke and King shortly after 11 a.m. On the south side of the street stood around 50 people with the Hamilton and District Labour Council’s Stand Against Hate, on the north side – mostly covering their faces with red balaclavas – stood about 30 anarchists/antifa and another 30 or so people around them.
Around 20 Hamilton Police officers formed a double depth line to block any movement south on Locke Street, with Hamilton’s four horse mounted unit forming the third column of the line. In the commercial plaza on the southwest corner; two vans of Waterloo Regional Police were unloading to join the Hamilton Police Crowd Control Unit
Police Officers all worn ‘soft cover’, meaning bicycle helmets if on bicycle, toques and baseball caps. The carried side pouches with their gas masks and other crowd control gear. None of the officers had their zip tie handcuffs visible, and all the officers I saw maintained firm passive body language. 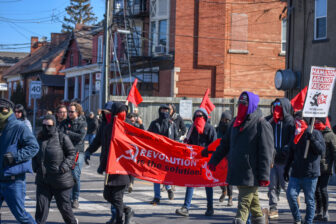 Anarchists/Antifa and Communists begin marching on King Street West towards Margaret Street in an attempt to outflank a police line that blocked them from marching onto Locke Street during a protest on Sunday March 25, 2018

Officers engaged in conversation with people on the Labour Council side of the road; across the road, the anarchists/antifa and communists were determining their next move.
Moving onto Locke Street North, they stared down the police on the south side and chanted police were racists oppressors who were there to protect white supremacists. The anarchist leader with the megaphone then signaled for them to turn west, marching to outflank the police line.
As this group moved, Hamilton and District Labour Council leadership huddled to determine their response. “Let’s follow, keep our group separate” was the consensus. Labour took up the rear.
A Hamilton Police Staff Sergeant at the rear radioed movements to the command center; and HPS vehicles moved to block traffic on Main at Margaret, as Hamilton Police formed new lines along the south side of Main blocking access to Locke Street from all approaches the march may take.
The march turned east on Main and moved towards Locke Street. Individuals broke off into the back ways, looking for a means of bypassing police lines. There were none.
Unaware bystanders found themselves unable to get to Locke Street, caught by surprise as police ensured no possible confrontation between the marchers and a small group of white nationalists who arrived earlier in the morning to walk up and down Locke. Police blocked access to everyone. (Media were allowed to move in and out of police lines)
The march arrived at Locke, but what was an expected stare down didn’t occur as the anarchists leading the march quickly turned back to the east and continued to Pearl Street. If they were seeking to outflank police, they didn’t succeed. Hidden from view on Pearl was a line of officers are Waterloo Regional Police who blocked this means of getting to Locke Street.
The quick decision of march leaders to move east appears to have surprised police command, as a group of seven officers were dispatched running to catch up to the march and reinforce police lines. 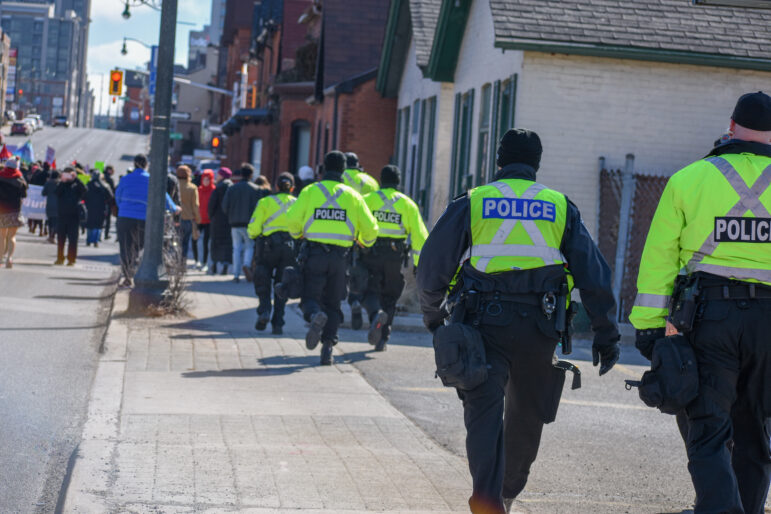 Onwards east the march continued to the next street.
At Ray Street, they were met with another line of police officers, and – once again – the Hamilton Police Mounted Unit. The anarchists at the front stopped the march, and tried to intimate the police line. Failing to draw a response from police, they paused and changed tactics. Chants began, the crowd became excited, and tensions began to rise.
Some shoving broke out on the front line, clearly visible from the rear of the march, tensions at the police line were mounting. A tense moment, captured by Rogers Media’s Brandon Rowe, as CUPE 5167 Outside Vice-President Barry Conway pulled an individual away from the police, while angrily yelling at the police line.
Conway describes himself as a radical unionist, and is widely know at City Hall for being among the most radical of CUPEs leadership at grievances and arbitration. He is well regarded for being level-headed and personable when expressing his principles, and known for his strategic ability to make gains over the long term. 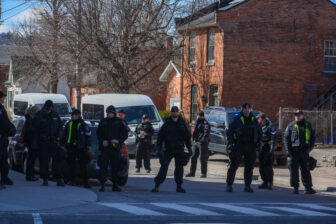 Waterloo Police line at Pearl and Main Street on March 25, 2018

In the middle of the crowd, two loud mouths were attempting to provoke the masked anarchists and communists by taunting them. Labour leaders and graduate students maintained the peace.
The march was stalled, the leadership elements huddled, and those who came looking for a viral conflict clip had pushed into the crowd. Police gave a crowd estimate of 150, which I believe includes the 50 or so journalists and onlookers recording every move.
The overwhelming number of officers meant police could maintain the peace. We didn’t even see the Toronto Police Service officers; indicating to me that Hamilton Police had a strong reserve of TPS officers in hard equipment to deal with any outbreak of violence.
Two people who I trust, and who were separately located close to both the anarchist leadership and labour leadership tell me that the anarchist leadership at the front was proposing marching on City Hall – having found no opening to Locke Street – and there was debate among labour leadership of where to take their part of the group next.
Labour leadership declared they were marching back to Victoria Park, and began to walk in that direction.
One of the anarchist leaders quickly took to the megaphone declaring that the “facists” had “run away” ‘having heard of our overwhelming counter-march’, declaring this was now a “Victory March” and called on people to march back to Victoria Park to celebrate.
The anarchist and communists banners quickly moved to reestablish themselves as the front of the march, police moved their vehicles on Main Street to force the march onto Ray Street northbound towards King Street.
The Mounted Unit took up the rear of the march, and the Sergeant commanding the column order the horses trot to generate the maximum noise effect to discourage the rear of the march from slowing down and creating a longer column for police to monitor.
Unsuspecting motorists found their vehicles surrounded by a sea of peaceful marchers. On Ray Street, a Hamilton Police Staff Sergeant ordered police units to force the marchers to Victoria Park. The Mounted Unit was directed to block the march from turning east at King Street. 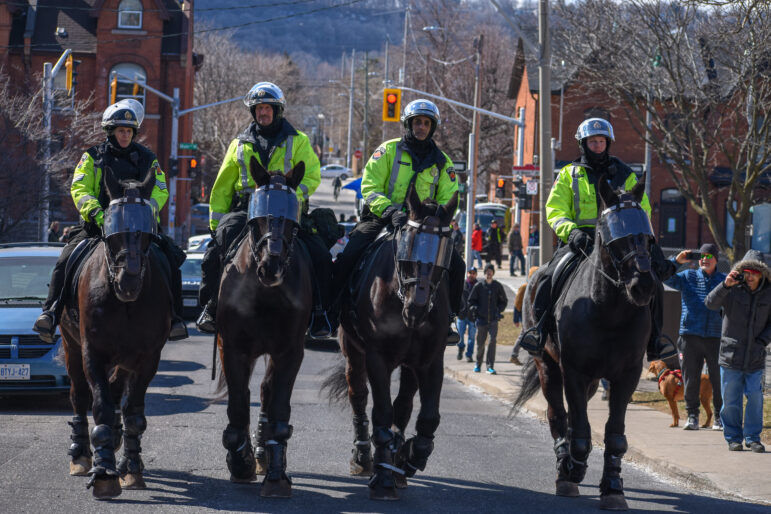 Along King Street, a few of the masked marchers stepped out of the march to hug and chat with unmasked friends along the sidewalk. Hamilton Police forensic and intelligence branch officers were taking thousands of pictures of the various masked individuals, and who they were associating with.
At Locke Street, the two groups split and returned to their original sides of the street. The anarchist/antifa and communist group moved further into the park; labour slowly dispersed, and police reopened Locke Street to both individual pedestrians and traffic.
Police maintained a highly visible presence on Locke Street South as local residents resumed their Sunday activities, and various people spent about an hour yelling non-violently at each other in the park. (Here’s a good flavouring of the back-and-forth in Victoria Park) 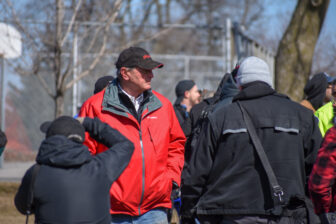 In the park, police kept close to the crowd monitoring the situation. Forensic officers continued taking thousands of photos in close to the crowd. Hamilton Police Board Chair Lloyd Ferguson walked among the crowd in the park, observing things up close.
Eventually, people began to disperse.
Later in the day, a bunch of the “Patriot March” Sons of Odin group posed for a photograph out front of a house with a swastika in front of them, before even later in the night going to local anarchist meeting place The Tower to cause a disturbance. (UPDATE: these links are now broken, captures of Facebook posts are on the ARC Collective Blog.)

0 thoughts on “Coleman's Notes on Stand Against Hate Solidarity March”